When the firemen arrived...

One of them grabbed it with a special pole and put it in a jar. Whether to make the dumb American feel better or to inspect it, I'm not sure, but it DID make me feel better. They said to me "no snake. Choi-e". So I called Susan and said "What is 'choi-e'?". And she told me. It was an earthworm! Well, that was the hugest worm I've ever seen! After this day, I think I need some of the gin that British woman was talking about last week! 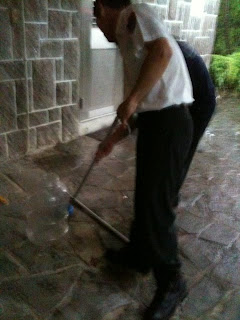 And then... I said to the kids "what a day! Torrential rains, earthquakes and snakes!" to which Ethan queried "Tarantulas?". No, it wasn't THAT bad of a day!
Posted by bristowmom at 5:50 PM

I dont know how you cope!

Well, I don't relax, that's for sure! I imagine with time I won't be so freaked out by everything that moves.