On Monday Susan introduced me to another new American woman, Deana. (Pronounced Dean-ah, not De-Ann-ah.) Deana has a driver. Deana's driver drove us down to town. (I just had to say that because it sounds like a nursery rhyme or something!) He was the driver for the days mini-tour, and one of the stops was the fabric market. You might remember I visited it with the kids a few months ago. It is an amazing place. This day we just had time for a "look-see", and I snapped 2 quick pictures. I think we are going back next week when we will be armed with measurements, items to help choose proper colors and ideas of what we NEED. I will also try to remember to take more pictures.

For now, here is a glimpse down one of the many aisles. Each aisle is lined with fabric stalls, each separately owned I believe. If you want a fabric you pay the person in the stall, so they must be individually owned or rented. You cannot see all the way to the end in this picture, and this is just one row of many! 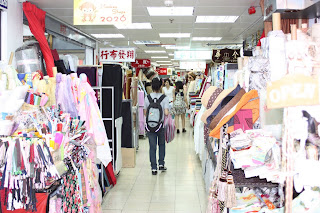 This stall is full of some of my favorite fabrics, which I purchased on my earlier visit. The man is practically drowning in the fabrics, and that is how it is in every stall. If you cannot find a fabric you like at this market, it doesn't exist! 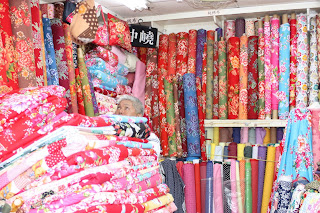 Yesterday was very busy. I went to the Community Center in the morning (thanks to Deana and her driver!) The center is a place for ex-pats from around the world to gather, meet, take classes, etc. There are a ton of women who arrived about the same time as me - just in time for school to begin - so it was fun. I met the mother of one of Anna's classmates, which is great. They are from Turkey. I also met a British woman who told me she hates it here. She has been here 15 months. She caught my attention when I heard her saying to another woman something like "I just drink more gin". I turned to see what that was about and she started laughing, told me how badly she hates it and that she drinks a lot of gin to get through! Once she had my attention the first lady took off. I later did the same. She was kind of funny, but who needs to hang around someone who is complaining about everything? She is the first person I've met that hates it. Most love at least something about being here. Challenges? Yes. But the rewards outweigh the challenges.

Later in the day Rosa came to watch the kids and I went to a meeting of new ex-pat wives from Eric's company together with several HR reps who are here. Taiwan is a bit of a new venture for the company and they are trying to iron out all the bugs for us and for people that will be coming in the future. After the meeting I went to dinner with one of the other wives. Had a really nice time talking.

It was a great day until I got home. Shortly after I arrived Ethan fell and hit his head very hard against the marble floor. It was kind of traumatic, for ALL of us. But he is okay. His head is sore but there is no evidence of concussion thankfully.

Today I have no plans. Perhaps I will just float on the pool...
Posted by bristowmom at 10:22 AM

Oh that fabric market!!! It would be almost impossible to choose from that wealth of colour.
How sad to 'hate' where one lives and to have to drink gin too! It sounds as though you are really settling in.

I am sorry about Ethan's fall. I am glad about making connections for you, and for your positive attitude. A wife is the one who really decides if her husband can be happy in a place like that. Well done. -msw

Ugh. Nothing like grumpy people. The fabric market looks amazing.