Enough of the fluff. (Decorating posts.) Do you want to see what daily life is REALLY like around here? I'll show you what I encounter, daily. Hourly even. 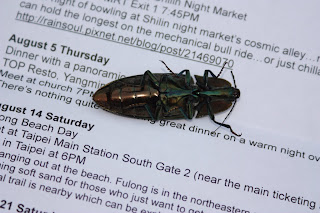 I must say, the above photo is such a happy accident for me. The bug is dead (cool.) The bug is metallic (very cool.) But if you haven't already, click on the picture so you see it full screen, and read the words around the bug.

Isn't that FUNNY! I didn't plan it. I just set the bug on a nearby piece of paper figuring it would show up better than in the grass. I'm not clever enough to think up something like this, but I sure did laugh when I saw it!

The next bug requires two photos to get my point across, I think.

I walked out onto the patio and noticed something hovering above a tree. "A hummingbird", I wondered? But it wasn't moving at all. As I walked closer I realized the thing wasn't hovering, it was suspended - caught in a web. A web ABOVE the trees. How huge do you think a spider has to be to spin a web high above the trees? A web big enough to catch a bug so big I can see it from the ground and think it's a bird!? Please don't answer that. I don't want to know. I hope the spider is very happy outside. OUTSIDE! (My apologies that you cannot see the bug better. I don't have any great lenses yet.) 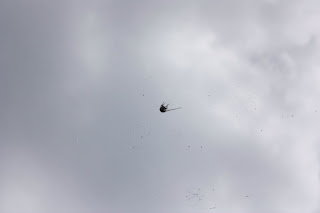 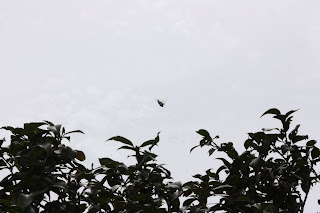 Later, I was trying to photograph the flowers on our cactus. They are quite high so I was on a small ladder. As I was reaching to try to get to the flower, a visitor showed up. Nothing too freaky. Just a huge bee of some sort. It apparently did not like being photographed though, as it dove at me shortly after I snapped the picture. 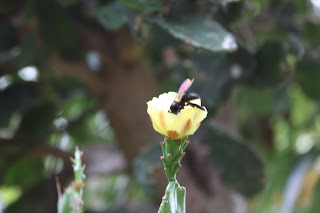 And finally, (for today) a "leaf bug". I don't know if that's a technical term, but that's what Anna calls them. They do look life leaves. 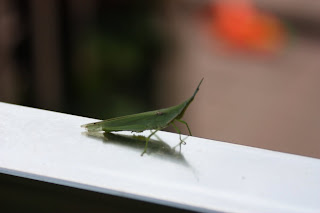 As you can see, my days are filled with exotic bugs. Lucky for you I haven't photographed the huge cockroaches, parading ants or leaping lizards. Which reminds me: If you're not on facebook you missed one of my (mis)adventures yesterday. I was washing dishes. I looked into the water to see what dish I would grab next. Floating next to my hand was a very small, very dead lizard. Eeewwwww.
Posted by bristowmom at 10:08 AM

We do get some bugs here, but none quite as ferocious as yours. I hate them!