I just discovered I have several "draft" posts that never were published.  Oops! Must have had something to say but no time to say it.

I'll post them now, beginning with an  introduction to Aayla, our Australian Shepherd. We got her as a puppy (more than) one year ago.  She is smart and pretty, but her nickname is "destructo-dog". She is a voracious chewer who has destroyed several pair of shoes, at least 2 sets of earbuds, one remote control and who knows what else! Nevertheless, we love her. 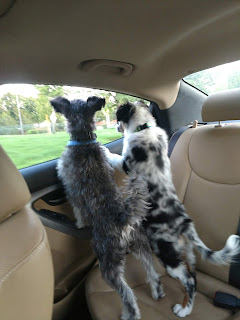 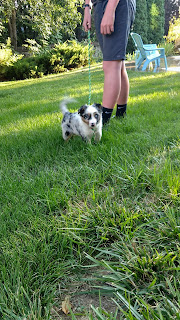 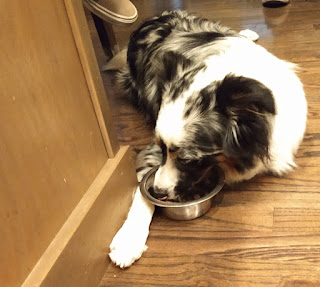 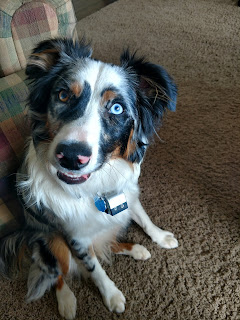 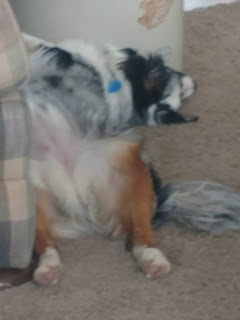 A Month of Changes

November started out with a bang! 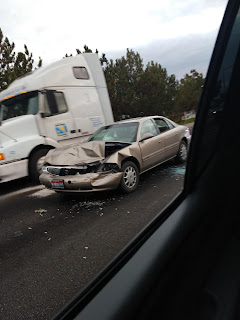 My Dad spent the night of October 31st at our house.  On his way home he was in an accident which rendered his car a total loss.  Dad wasn't hurt other than a couple of cuts to his hand.  Well, actually I believe his thumb was dislocated, but he said he "just popped it back into place." You may think this sounds strange, but his accident was a blessing. It meant that his driving days are over. They should have been over a few years ago and the fact that he was still driving had my brothers and I concerned that he would kill someone.

I thought at long last the accident would convince Dad that he could not continue living in his house, since there is absolutely nothing within walking distance.  Still, he wanted to stay. My brother said it would be possible for Dad to stay if he would hire some in home help. I told Dad that he had to choose between hiring help or moving to my town.  He wanted to think about it.

So I gave him time to think, and I went about enjoying the most long-lasting, colorful autumn in memory. 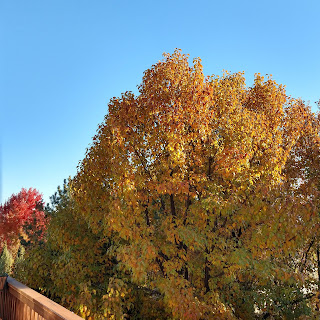 Then last Monday I heard from the woman who has hosted my Dad for dinner nearly every Sunday for the past eight years. She passed on some observations about Dad and then said that, as much as they love him and would miss him, it was time for him to move near me. I love her and highly respect her opinion, so that message kicked me into high gear.

I might bore you with details now, but they're important to me because they show such evidence of God being in control of all of the details of the past week.

Tuesday morning I made phone calls to two assisted living apartments which we had previously visited and liked. I had to leave messages at both places. I also sent a message to the members of my Bible study group asking them to pray that God would lead me to the right place for my Dad and give me courage to say what needed to be said to Dad.

At noon I had a hair appointment and was talking with my stylist about the situation with my Dad. (She is in a similar situation with her mom so it's a frequent topic of conversation for us.)  I mentioned that so far neither of my phone calls had been returned.  She suggested I look into a place right near her salon. I had never heard of or seen the place, but at her suggestion I decided to drive by.

Once I was in the parking lot I thought it wouldn't hurt to look inside. Before I knew it I was speaking with a woman about my Dad and she told me she thought he would do well in "independent living" rather than assisted living. The next thing I knew, I was looking at the only one bedroom apartment they had available.  It was freshly remodeled and the entire place was lovely. I made an appointment to bring my Dad for a tour on Thursday.

My plan was to have two options available for Dad, and on Thursday I would tell him he had to move but he could choose between the two places. Except one place never returned my call and the other informed me their prices had gone up a LOT so they were now out of Dad's price range.

A bit panicked, I talked with my husband Wednesday night and confessed I couldn't imagine what I was going to say to my Dad. He thought it was best that there were not two options because my Dad has been unable to make a decision about anything for a long time. (For instance, whenever we go to a restaurant I have to order for my Dad. He cannot make a choice, even between something simple like a baked potato or mashed potatoes.) We talked through what I would say, and he said he would be praying for me. (He's currently out of the country.)

When Thursday came I prayed a little and reflected on a devotional my Bible study leader had shared. It talked about David and Goliath and said the reason David could defeat the giant was because David knew his God was more powerful than the giant. It reminded me that my focus should be on God and his limitless abilities rather than on myself. I prayed about that the whole way to Dad's house.

After we had visited for a bit I said: "Dad, I've been thinking and praying and talking with people about your situation.  I've decided that since you can't make a decision about staying in your home and getting help or moving to Boise, I need to make the decision for you. I've found a lovely apartment and we are going to go look at it today." He didn't say no.  HE DIDN'T SAY NO! I couldn't believe it! I went to another room and expressed my disbelief to God. And I PRAISED Him for what He was doing.

That was Thursday, November 29th. On Friday the 30th I was back at Dad's house packing things up and yesterday - Saturday December 1st - Dad moved!

Here is a tiny glimpse into his apartment last night. Tomorrow I'll try to remember to take some pictures of the common areas; they are beautiful! 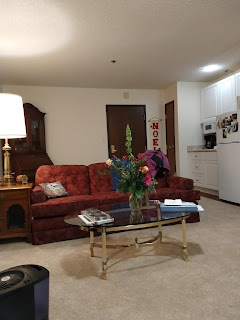 If you are in doubt as to God having anything to do with this, let me fill in a few more details.

1. My Dad was a pilot. It "just so happens" that several of the apartments around him are occupied by former pilots. Word had spread that another pilot was moving in, and two of them were anxious to meet my Dad.  They invited Dad, my brother and I to sit with them at dinner last night. ( A dinner which happened to be delicious!)

2. Another gentleman moved in the day before Dad. His son and daughter-in-law were in and out bringing things to their Dad so we often crossed paths in the hallway. During one conversation we were sharing stories of how/why our Dads came to live here. I mentioned that I had specifically wanted a one bedroom unit for my Dad and the son asked me, "when did you look?". When I replied "Tuesday" he smiled and told me that they had looked on Monday. At that time there were two units available: a one bedroom and a studio.  His Dad chose the studio, which left the one bedroom for my Dad! If it had been a studio, I would have passed.

3. Despite our long, glorious autumn, winter recently arrived in Boise. It snowed a bit on Saturday morning but changed to rain fairly early. It was not an impediment to moving.

I don't drive in the snow anymore because we live on a hill and two years ago, while driving downhill in the snow, I slid into a curb and bent the axel of my car. The repairs were VERY expensive and it destroyed my confidence in my winter driving abilities.

Also, after the crazy week culminating in one very long day of moving I was exhausted last night and knew I needed a day of rest. When I woke up this morning, this was what my back yard looked like: 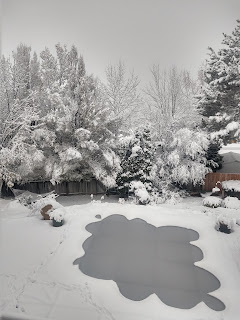 The weather forecasters stated today that they have no idea how they made such a mistake. Yesterday they predicted we would get about 1 inch of snow.  My son measured 7-1/2 inches on our deck. This meant that if anyone (like Dad) wanted me today I could easily say "I'm sorry, I cannot get there today".  And for that, I say "Thank you God!" The forecasters didn't make a mistake; God intervened on my behalf!

I take so many pictures of flowers.  Having nearly given up on blogging, I had no outlet for sharing the pictures. Having decided to try to get back to blogging, and believing that every blog post needs pictures, well, why not share some of my flower pictures?

An entire field of purple coneflower (echinacea) near my Dad's house. 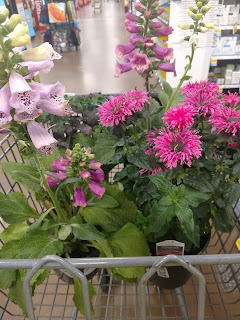 A few new plants about to be purchased and planted... 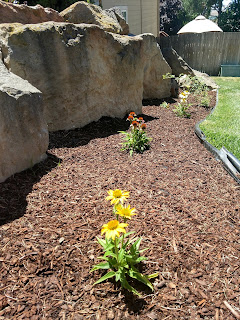 ..as an addition to this area.  At the beginning of the season this was nothing but weeds and landscape rock. My husband and I spent several weekends removing everything.  We picked all of the rock out by hand.  We've been relocating it to the back gardens because we have a dog who likes to dig. The rocks are helping put a stop to her digging. (The above picture was taken before I added the plants from my shopping cart.) 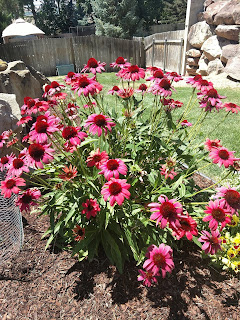 And finally, my own purple coneflower, which is in it's third year.

We have made great progress on our gardens this year. When we purchased this house 3-1/2 years ago everything was an overgrown, neglected mess. There is still much to do, but we feel like we turned a corner this year. Now there is more good than bad, so there is hope of taming the entire thing.
Posted by bristowmom at 9:34 PM 3 comments:

When I was growing up, my siblings and I were required to say "Excuse me please, thank you for the good breakfast" (lunch, dinner). My husband and I have required the same thing of our children. The funny thing is, while my husband and I are typical Americans in that our ancestors hailed from many different countries, each of our families primarily identify as Norwegian and secondarily German.  We were reading a bit about Norwegian customs and learned that a typical Norwegian family requires their children to say exactly what I was raised to say at the end of every meal.  I find it interesting to know that we have carried on customs from our ancestors without even knowing it. 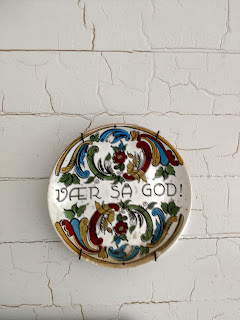 I looked online for a piece of Norwegian folk art to include here.  I found some beautiful examples but was afraid they may be copyright protected. Suddenly I remembered that in March I visited my 97 year old Aunt and photographed some of the things she had hanging on her walls. Perfect! 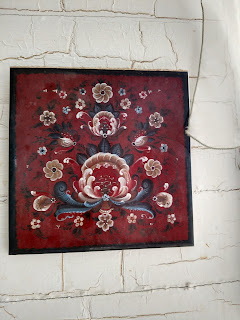