I Love You Just the Way You Are

A couple of weeks ago I bought "Alli" - the weight loss supplement pills. For various reasons I hadn't used them yet. I took my first pill this morning. Ethan saw me taking it and asked "What is that for?" I told him it was to help me get skinny. He said "I don't want you skinny. I like you just the way you are." I asked "You like me fat?" He said "You aren't TOO fat. Like I saw this man one time who was" (he held his hands apart - about the width of my butt) "But I like you just the way you are" he said again. "Why do you like me this way?" I asked. "It's good for holding" he answered. It reminded me of a comedy routine I saw Roseanne Barr do many years ago. She said something like "Who wants a skinny Mom?" and described how it was no good to sit in the lap of a bony Mom; no, you want to sit on a nice, cushiony Mom. I guess she was right! Well, at least a 6 year old boy wants a fat Mom. An 8 year old girl wants a skinny one, and I imagine when that boy gets just a bit older he would prefer a skinny Mom too. I'll do my best to accommodate them!
Posted by bristowmom at 2:06 AM 3 comments:

Everyone in our home is sick. Well, except me. Eric has a sinus infection and is in enough pain that he actually called in sick to work (!), Anna has a fever and diarrhea and Ethan just has a cold. I kept both kids home from school - Anna for obvious reasons and Ethan just because he would have been mad if he had to go when he is sick while all the other sickies got to stay home.

Make no mistake about it, the older my kids get the more I like them. But there is this one thing: They are now old enough to fill in details for me. Details of things I'd rather not know about! On the other hand, now I only have to HEAR the details, I don't have to SEE them! Yep, I definitely prefer older kids!
Posted by bristowmom at 11:14 PM 3 comments:

So... We were eating lunch the other day when Ethan said "My tooth!"

He opened his mouth. No tooth. Blood.

We searched the corn dog. We searched the jello. We looked in his Gatorade, the carpet, the place mat... It was gone.
Apparently he ate it. Eewww. How many more ways can I be grossed out by teeth issues?
And I have to say, I hope some of the teeth that have been falling out will replace themselves soon. He is looking quite strange - kind of snaggle-toothed. Poor, sweet boy.
Posted by bristowmom at 1:52 PM No comments:

The past few days have been busy. On Friday the elementary classes held the "holiday parties" which were missed due to snow just before Christmas. I "helped" at both parties. (Mostly I just showed up.) The kindergarten party was pretty mellow but the noise level at the third grade party was insane. I could never teach. I said something to a group of Mom's about how I would have a non-stop headache if I was a teacher with all of the noise and one Mom said "I took 2 preventative Tylenol before I came in today." So it's not just me! It always, ALWAYS makes me feel better when I find out I'm not the only imperfect Mom in the world. But no matter how many times I learn that I have company, I continue to feel that every other mother in the world is perfect.

Today was the first time our neighborhood scrapbook club has gotten together in 6 months. I was only able to go for 3 hours, which made me sad because there were more women there than ever when I've attended in the past. They're meeting tomorrow too, but because it's Eric's birthday I'm not going.

After regular church tonight Eric and I checked out a different class than the one we had been attending. Not sure if I liked it or not, although afterward I enjoyed talking with a really nice woman who is pregnant with her 6th child! She is Perfect, of course. She's pretty, her kids are all well-behaved and she home schools.

I miss taking time and writing here, but lately I've used my time to make cards. Someday... Probably it will all happen at the same time: I'll write well, make beautiful cards AND be the perfect mother.

And then I'll wake up.
Posted by bristowmom at 11:29 AM No comments:

I've decided to start a new blog. I'm keeping this one for "writing" and starting the new one as a place to show my cards. I've been posting some cards from time to time on this blog, but I want to make this change for two reasons: 1) People who read my blog don't necessarily care about cards; and 2) As I enter cards into contests I don't want the other participants and/or judges to have to read my personal stuff.

So, if you're interested, here is a link to the new blog. If you're not interested in the cards, I will still write here.
Posted by bristowmom at 10:39 AM 2 comments:

I realized I never said either of those things here. Seems like a blog requirement and I missed them both. Sorry!

Christmas was good. We had a nice, relaxing time with my brother's family. We have spent the past 2 Christmases at their house. His wife (who I call Martha despite the fact that it really irritates her) does a beautiful job of decorating. Next year we need to host the Christmas celebration. The bar has been set high for decorating!

I have an embarrassing confession to make: I brought the digital camera but never took a single picture of people. Instead, I photographed this: 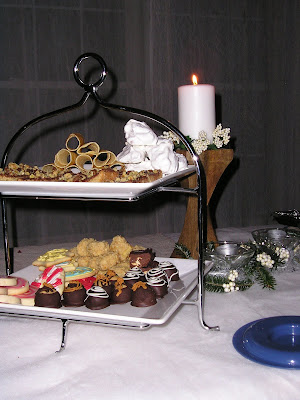 If we are being honest, cookies are the highlight of Christmas in my family. I think the fact that I took pictures of the cookies rather than the kids is proof of that. In my defense though, when the kids are opening gifts I really love to watch and for me a camera gets in the way of watching.

When we returned home on Christmas Eve Anna began crying because her ear hurt. The short story is I took her to the emergency room at 3:30 Sunday morning because it hurt so bad she couldn't sleep. One of Anna's gifts was a child-sized Snuggie. She spent most of Christmas Day snuggled up in it. 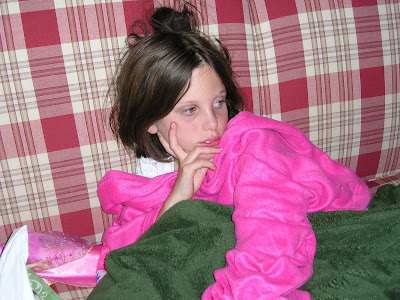 Ethan received a red bathrobe. It is super, super soft. Ethan is extremely particular about his clothes - we have to cut labels out of almost everything because the labels irritate him, and he won't wear shirts that are screen printed because he finds them too uncomfortable. He LOVES his robe because it is about the softest thing on the planet. For some reason in this picture the color looks extremely pink. (Ethan is pretty unhappy about that fact.) And, for the record, he has had a haircut since this picture was taken. A long overdue haircut! 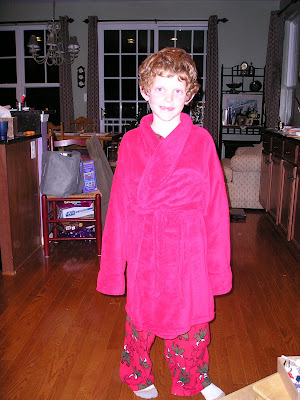 Wow! That hair was BAD!!

The other thing that happened over Christmas was we lost a pet. Ethan's fish jumped ship. Thankfully, he was not traumatized by the event. (Ethan, I mean. The fish was, obviously, extremely traumatized!) In fact to my great surprise Ethan thought it was funny to flush the fish. He called to Anna to come watch and they both thought it was funny. That was a big relief because I feared a scene like one in The Cosby Show many, many years ago where the flushing of the fish was a huge, solemn event.

I am very much looking forward to school resuming. It feels like I cannot go 30 seconds without hearing "Mama, can I..." Even now, it feels like I could write more colorfully and in more detail if only I didn't have to stop every 30 seconds. I am not kidding - this paragraph has already been interrupted 3 times.

With that, I'm giving up for now.
Posted by bristowmom at 10:07 PM No comments:

Time to make (and hopefully SEND!) Thank You cards for Christmas. Nothing about this is "Christmas-y", but I think I'll have Anna send it so it kind of fits. This image reminds me of her. The set this came from also has a young boy who, naturally, reminds me of Ethan. He is building a sand castle, so I'll either have to figure out a way to make that work for a Thank You card or not stamp that part of the image. 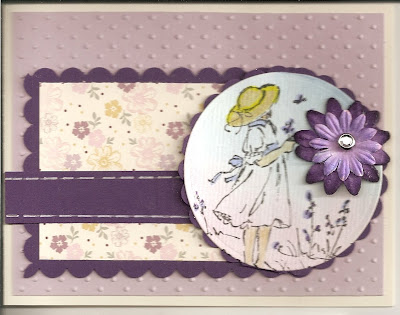