Not sure if this will work, but I'll give it a go.

Earlier this week I went to meet my sons class for a field trip.  When I arrived at the destination I noticed goats in the nearby foothills.  Lots and lots of bleating goats.  Since I had never seen them before, I took a quick video.  Then in yesterday's newspaper I noticed an article about the goats.  They have been brought in to eat the brush in the foothills and ostensibly lower the threat of wildfires this summer.  Rather clever, don't you agree?
Posted by bristowmom at 12:54 PM 1 comment: 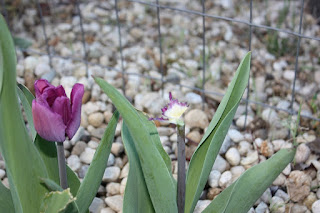 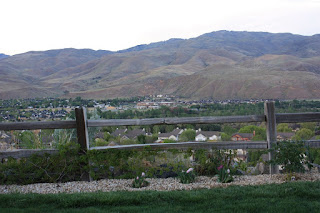 We have been in the latest house for about 6 weeks. We love it. LOVE it! Despite:

MICE - Upon moving in we found mouse traps all over the house. Empty, thank goodness, I hoped there was not a current issue with the despicable things. Soon enough, however, I was presented with evidence of their presence. A pest control expert has been contacted and now I think they might truly be "in the past". Due to the fact that we are on the edge of a bluff (ridge, rim, bench - whatever you choose to call it) we will likely need to have an ongoing relationship with the pest control expert.

MARMOTS - Yellow Bellied Marmots, to be exact. Also called Rock Chucks and Whistle Pigs. I've learned quite a lot about them since moving into this house. The first thing I learned is they like to eat tulips. And poppies. And miscellaneous other flowers. There go my hopes for a beautiful garden out back! I now have lots and lots of containers on our front patio. Photos, some day soon. (Maybe!)

MOUNTAIN LIONS - This last move was the shortest distance I have ever moved, just up the hill (cliff) and over a bit. So when a mountain lion showed up on our old street a friend notified me to be on the lookout for it at our new house. Last Monday morning the cat killed one dog and injured another right in the backyard of one of our former neighbors homes! It hasn't been spotted since, but every so often one is spotted somewhere in the city. Ah, wild life. It seems I cannot escape it wherever I go.
Posted by bristowmom at 1:00 PM 1 comment: