Hello from Sicily! I am in the midst of a whole new style of traveling. I am accompanying my husband on a business trip so, while he has built in some time for tourism, I am on my own most of the time. The first few days of our trip were spent in Virginia, where we are in the process of selling our home. I was able to catch up with many friends while there and so thoroughly enjoyed my time. We are currently in Catania, Italy. I'm trying to write this post on my phone, having left my iPad on an airplane, so please forgive spacing, spelling or other errors. Before I write much more I will share a few miscellaneous photos: 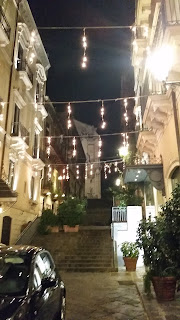 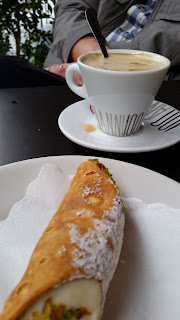 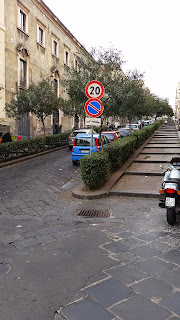 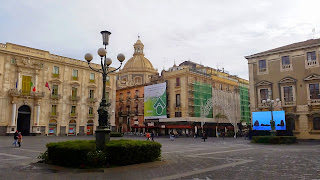 Early on in my time here, I discovered a wonderful combination of cappuccino and Cannollo, a local dessert.  Other than that, I have been disappointed in the food.  I think the issue is that I am used to American style Italian food which, as usual, is very different from the real thing.

One interesting food note: last night we dined with some of my husband's colleagues.   One of them ordered horse meat as his entrée.   The idea horrified me, but I understand it is normal here.  My husband actually tried the horse and he loved it so much that he wanted me to try it.  Unfortunately  (or fortunately,  perhaps) I was unwilling to try it.  Even now thinking of it turns my stomach.

The part of Catania that I am most enjoying is the sound.  My favorite thing is to go into a piazza and just look and listen.  The atmosphere is always festive. There are groups of people, men mostly, standing around talking and sometimes gesturing wildly;  there is always a man playing an accordion  (which brings a smile to my face and seems quintessentially Italian ); and there are church bells ringing frequently.   I have tried to no avail to figure out the schedule for the bells.  I thought they would ring on the hour, but it seems to be on the half hour and they do not ring consistently from one hour to the next.  On Sunday (while enjoying cappuccino and Sicilian Cannollo with my husband) the bells began to ring and suddenly there was a loud explosion.  Eric and I looked at each other in alarm.  There was another explosion at which time Eric observed that no one looked the least bit alarmed.  Reassured, we continued with our cappuccino.   The explosions continued for several minutes.  Last night at dinner I asked the reason for the explosions.  No one knew.  They guessed perhaps they were in anticipation of a religious remembrance that is upcoming.  Explosions? Apparently no big deal in the life of Italians!
Posted by bristowmom at 2:48 AM 2 comments:

On Christmas morning, Eric and I were up long before the children.  That is the first time that has happened probably since Anna was 2.  It was very odd to be sitting up enjoying a cup of coffee and waiting for the kids to get up!

On New Year's Eve we had dear friends visiting.  We think we may have a new tradition, since it has now happened twice, of homemade creme brûlée.  Two years ago it was made at our friends home, this year at ours.  It was much easier than I expected and it is a much loved treat, so I'm sure I will be making it again.

Two nights ago my brother and I sat in an emergency room with our father until 3:00 a.m.  Although he quit smoking 4 years ago (in very impressive fashion: cold turkey!) approximately 60 years of the habit have left their mark.  Thankfully for now his issues are very treatable and he should be back to normal within a few days.

In a few hours we return to the routine of school and work.  Not sure how my side of that will go, since sleep has once again eluded me!

Next week Eric's aunt arrives.  She has graciously agreed to stay with our kids so that I can accompany Eric on his first business trip to Italy.  I'm supposed to be excited about the trip but I don't seem to be.  Perhaps it's the apprehension of leaving the kids; perhaps the fact that, other than 1 day with a guide in Rome, I have no idea how we will actually spend our days.  In a little more than a weeks time we will be visiting 3 cities.  I've been unable to come up with a "must see" list for 2 of them despite asking a travel agent and a total stranger for help.  (I heard a woman in a store say she had just returned from Italy.  I approached her hoping for advice.  She was happy to talk to me but the only city I'll be visiting that she was familiar with was Rome, where we have the guide.)

When we return from our trip the sellers of our new home should have moved out, so I'll be able to get to work there.  I haven't scheduled movers yet, and won't until I return and have some idea when the house will be ready.  Eric has another business trip shortly after Italy, so chances are good we will be moving without him.  That is taking the fun out of it for me.  I think I need to adjust my thinking on that score! I have pictures from Christmas and New Year's Eve, but they're on another device and I don't think I retrieve them without waking the house, so today I can only post words.
Posted by bristowmom at 7:57 PM 2 comments: