We had a beautiful, clear day today from sunup to sundown. I began taking pictures a little after 5 a.m. I love how the mountains appear as layer after layer, like in a watercolor painting. 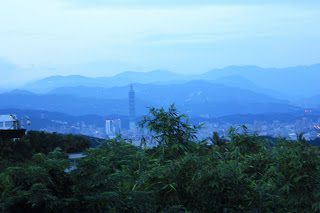 I will need to load my photos onto a different computer in order to post more than one at a time. I will try to get that done tonight or tomorrow morning.

I have to add a funny story...

Tonight Eric spotted another lizard on a door. I think it might be the same one I saw 2 days ago. It was bigger than the others that have been in the house. He quickly opened the door, but instead of falling off the door outside it JUMPED back into the house. I squealed so the kids came running. It began running all over the back hall so Eric grabbed a mop to try to chase it out. Anna stayed in the hall to watch and I closed the door to the hall to prevent it from entering the kitchen. A minute later Anna began squealing, so I opened the door to see what was happening. As before, the lizard had disconnected from it's tail. However this time, well, you just won't believe what happened. You've heard of running around like a chicken with it's head cut off? The lizards TAIL kept moving! Wiggling...all over the hallway! AND...with blood coming out! I swear!
Posted by bristowmom at 7:59 PM