Excuse me, but I'm a little grumpy today. Eric called this morning. He had been to a beach and gone swimming in the ocean. I'm so jealous I could... (Fill in the blank.) Not exactly beachy here in Virginia. Here's a sampling from yesterday and today.

This photo is for my Mom and Dad. Does it remind you of Walden? 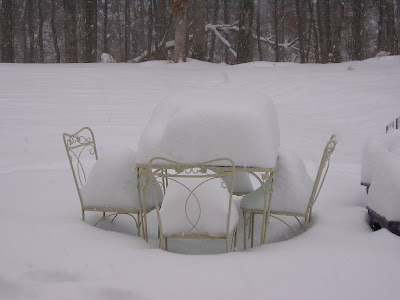 Something about these lights looked familiar to me. I wasn't sure what.

Last night the kids and I finally watched A Charlie Brown Christmas. It was a PERFECT night for it. The snow was still coming down outside so it looked a little like the outdoor scenes in the movie. When I saw Snoopy's prize-winning decorations I realized that was why our sad droopy lights looked familiar - they are hung just like Snoopy's lights! 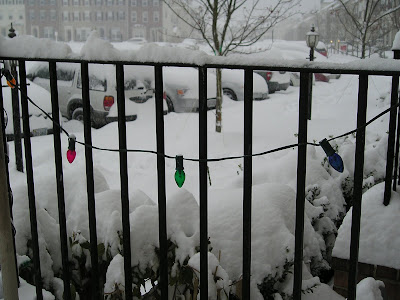 Is this a cute boy or what? I just love the "Elmer Fudd" hat! He found an icicle outside and was licking it like a popsicle. 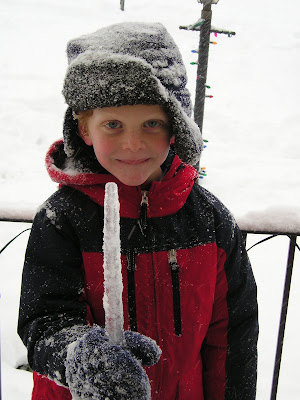 By this morning it had finally stopped snowing. Here is the scene about 7 a.m. The big mountain of snow in the center of the picture is actually my car. 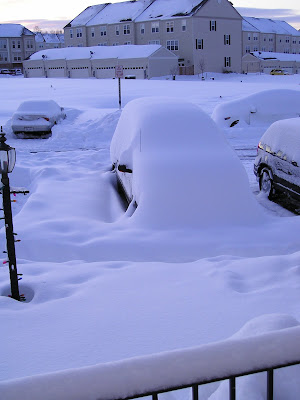 When I opened the door to take some pictures of the snow I found that even my Christmas swag had snow on it. Rather pretty, I thought. 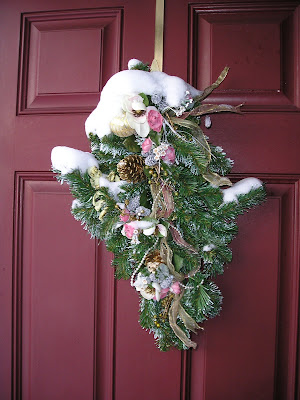 After talking to Eric and hearing about his wonderful trip to the beach (grrrr) it was time to get to work. I began clearing off the car. 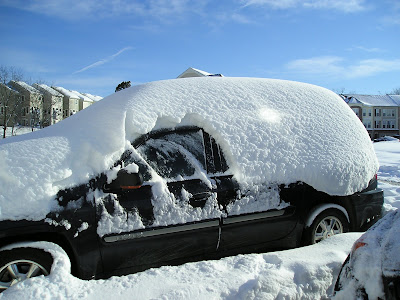 I had to shovel a TON of snow from behind the car. The plow had been around so the snow was about 3 feet high in back of the car. This picture was actually taken to show the snow hanging off the roof of our house. While I was shoveling the sidewalk a neighbor cautioned me to "look out" in case that snow came sliding off. I suppose it will slide off sometime after dark tonight, when I will have forgotten all about it. I will undoubtedly think someone is trying to break into our house. 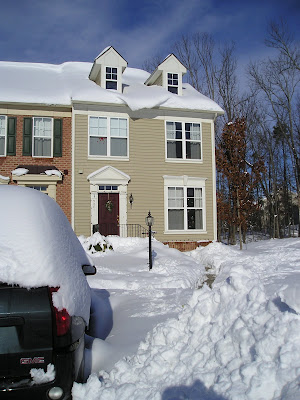 While the neighbors and I shoveled, the kids went sliding on a small hill. I realize that most people call that sledding. I refuse. If you ask me, you slide down a hill on a sled, therefore the verb is slide, which translates to sliding. Sled is a noun (or maybe an object of the preposition) so sledding makes no sense. But that's just me. I also refuse to allow anyone in my family to call me "Ant Laura". I have drilled into the heads of my nieces, nephews, and children that an ant is something that eats your food at a picnic. An AUNT is someone who loves you. As proof I offer the word automobile. My kids and my nieces and nephews oblige me. (Although a certain niece taunts me... "Hey ANT Laura" she loves to say.) But I guess I've gotten off subject. Sorry.

So here, in the distance, are the kids. They are SLIDING. 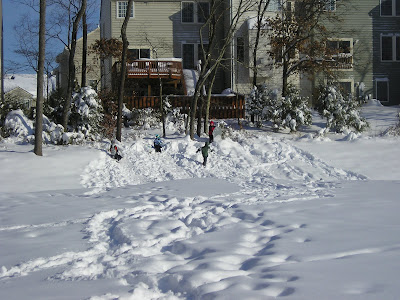 One final picture. The kids standing on top of a pile of snow next to a street sign. They will want this to remember in the future that the snow really WAS this deep. 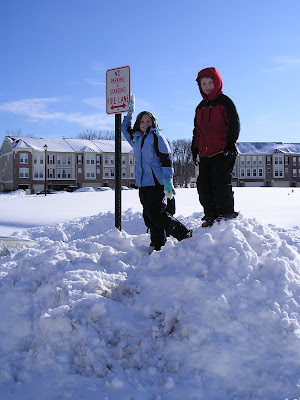 It is a beautiful day. Clear blue sky and snow sparkling like diamonds. As I recall, the sun on the ocean also sparkles like diamonds. But I wouldn't know about that. You'd have to ask my husband. Grrrr...

Posted by bristowmom at 1:39 AM

All you need in that picture is a big hunk of ice smashing the glass top of the table! That's almost a perfect replica of the 80's picture.

Yep, amazing isn't it? In our case I don't expect a chunk of ice to drop. I expect some object to be hurled by a neighbor boy.

Sorry about the ocean and the beach and your husband swimming in it. I am jealous too!!! GRRR!

In the blizzard the other day I was so worried about the kids' bikes rusting (they were on the porch) that I trudged along in waist deep snow to get to the stupid shed two times. I was so FREEZING by the time I got done I couldn't even construct a complete sentence. While Joel was shoveling like a pro, I was so cold I couldn't even talk. I miss summer!