Today I am doing what I love - stamping! I decided to try some more snowman cards. First, here is yesterdays card (again): 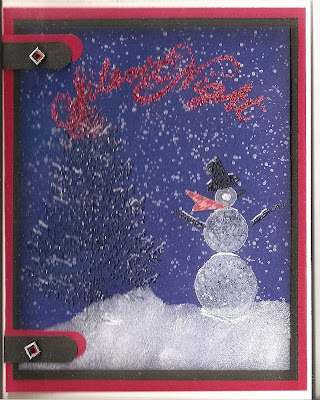 I don't own any snowman stamps. So when I decided I wanted to make a snowman I hunted through my stamps for some circles. I was thrilled to find two different sizes; however, I needed a third for the head. Since I didn't think I had one, I pulled out the letter "o" from an alphabet set I have. I wasn't happy with the result - I colored the middle in but it is more opaque than the rest of his head. There were other things I thought I could improve on too, so I got to work.

I had actually put my stamps away yesterday (gasp!) So I had to find my circles again. In the process, I found a third, smaller circle. Perfect! Here is card #2: 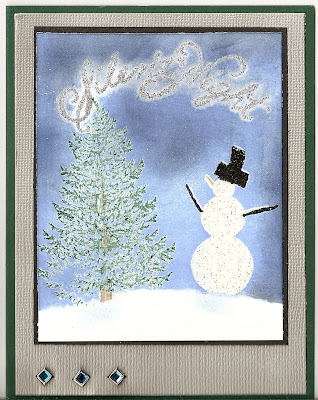 There are several things I like better about this card. For one thing, I decided to start with white paper, so the snowman looks white, as a snowman should. To be honest, I did 3 or 4 similar to this. So far this is the only one that I have mounted and put onto a card. I was getting a bit bored with the same picture, so I decided to try something a little different. Here it is, and it is my favorite snowman card: 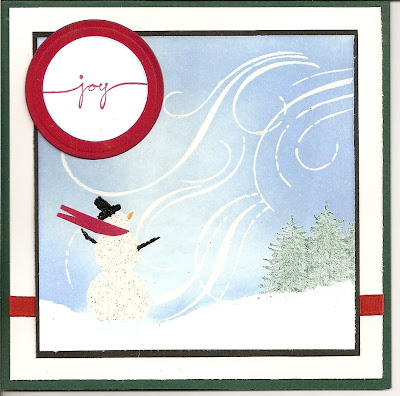 I copied the swirl idea from this blog. (This is probably my favorite stamping blog. The woman is an artist. She travels around the country teaching classes. I would like to go if she ever comes near me. In the meantime, I am trying to learn from her online.) I really love this card. I really got stuck though when it came time to put a sentiment on it. I don't own many Christmas stamps. I have just 2 with words. They are "Silent Night Holy Night" (from which I've been pulling Silent Night on my other cards) and "Let's Welcome Jesus". Neither worked here. I do have a stamp that says Merry Christmas on part of it; I have been using that on my family Christmas Cards. However, I could not find that this morning! So I used "joy". I think it works okay. It feels a little disingenuous though, because snow doesn't actually make ME joyful. It just makes me cold. Oh well, I think a lot of people think snow and snowmen are happy, joyful things, so this will have to do.
One more note for any "crafty" readers. A few months ago I bought a Xyron thing-a-ma-jig. I got the 5 inch version. It is one of the best things I have ever purchased for making cards. Now I can make cards on dark colored cardstock but insert a white or vanilla piece for writing. I run it through the Xyron to get adhesive on the entire thing. Also, any time my front pieces get too heavy I run them through the Xyron for total adhesion. I love it!
Posted by bristowmom at 2:13 AM

I like your cards, I think I like the middle one the best, but the last one is also very nice.

I guess you inherited Grandma's artistic ability. Speaking of her, she did eat some weird food. Pigs feet and cow tongue, ludefisk, and who knows what else. That recipe you listed sounds like another winner!

Thank you! Too bad I can't send anything your way.

Mom said Grandma actually did make "blood soup". I cannot imagine it, and frankly I don't WANT to imagine it. Yuck!