School has been cancelled for what was left of the week. This morning the snow was STILL being cleared from our neighborhood. The vacant lot in front of our house was a beehive of activity. Little dump trucks and big dump trucks were dumping loads of snow. At one point I went out to take a picture of the activity and found this: 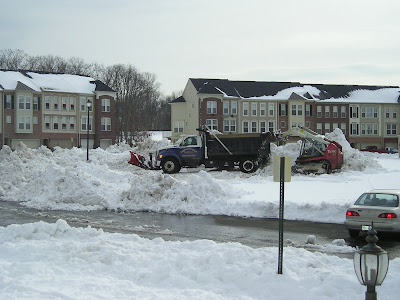 The large dump truck had gotten stuck in the snow!! The little bobcat was ramming its scoop into the truck, trying to propel it forward I guess. But the wheels of the dump truck just kept spinning and the bobcat wasn't heavy enough to push the dump truck. Next they tried scooping SNOW under the tires. (I was really laughing at that!) They must have thought they'd get some traction from the snow. When that didn't work they brought in another little bobcat-type thing. They hooked a chain from the first bobcat to the dump truck and tried to pull the truck out. Eventually they coordinated their movements so the first bobcat pulled while the second bobcat rammed the dump truck. That worked and they got out. It was pretty entertaining. 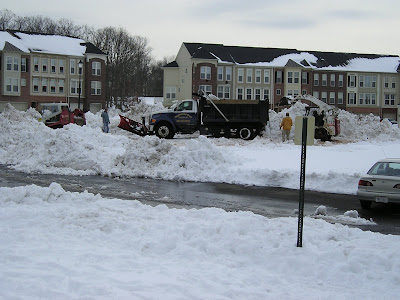 After the trucks and bobcats left I let the kids go out to play on the mountain. Thankfully I snapped these pictures: 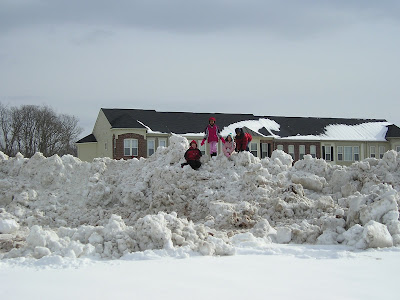 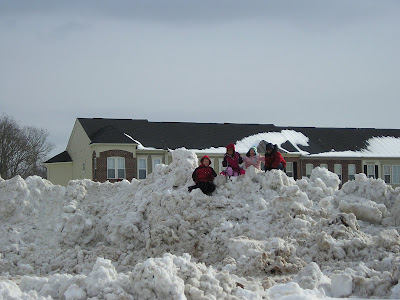 I'm guessing some neighbor didn't like the kids playing on the mountain, because as I type they've come off the mountain and there is a new piece of machinery out there which seems to be tearing down the mountain.

Posted by bristowmom at 2:06 AM

Wow, that is a lot of snow. I don't envy even an ounce of it.

However, I got your Christmas card in the mail the other day. It is gorgeous!! How do you find the time and energy to make such wonderful things?

So now try to imagine what my house looks like. Er... no. Don't. It's not pretty.