I have a dilemma. I purchased soap from my talented SIL, intending to give it as gifts. I've begun working on packaging the soap. My first attempt was so successful that I'm not sure I can give it away! I'm beginning to realize the downfall of handmade gifts. Either they turn out so nicely that I can't bear to part with them (because I won't be able to exactly replicate the result) or they turn out so poorly that I'm embarrassed to give them away. The solution I've come up with for now is to photograph the gift. That way I sort of get to keep it, while giving it away.

Here is the gift box I made, which I love, love, LOVE: 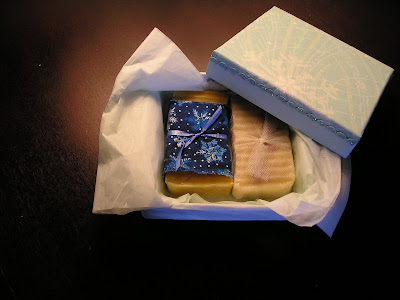 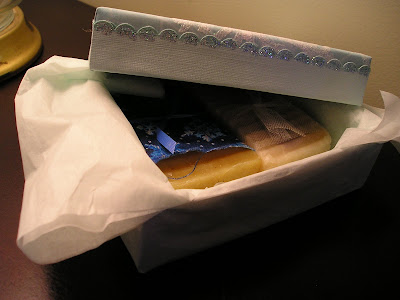 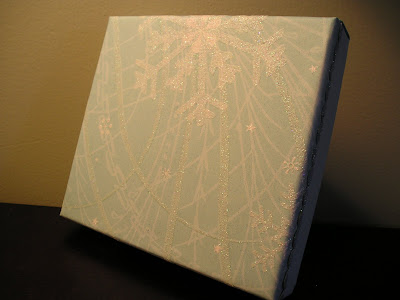 By the way, there are 2 reasons why I cannot replicate this. Number 1, I used paper purchased over a year ago. There is no chance of buying more. I have enough paper to replicate the box one time. However, the box itself is actually a Godiva chocolate box. I only had one. Hmmm... I suppose I could buy a whole bunch more. But then I would have to eat all that chocolate. I'll have to think about it.

Meanwhile, here is another (very clever, I think!) gift package: 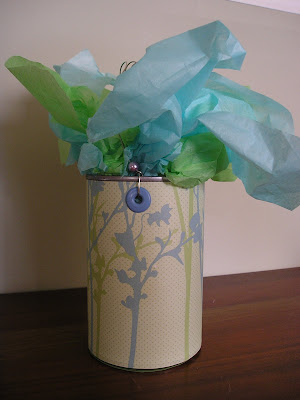 The idea from this packaging, like any original creative idea, is not mine. My friend Alicia gave me the idea. This is a can (soup or pears or something) wrapped in paper. Using a crop-a-dile you punch holes in the can and string wire through the holes for a handle. I add eyelets to my holes for a finished look. I also added beads (from my daughter's jewelry making supplies!) to the handle to jazz it up. Unfortunately, I didn't take a photograph showing the pretty handle.
The gift inside is a small jar candle from Yankee Candle. They fit PERFECTLY!
My last picture for this post is sort of a preview of what my day is going to be. It was taken several weeks ago when we got our first snow. We didn't get much, but the kids were THRILLED nonetheless. Here they are, trying to catch snowflakes on their tongues: 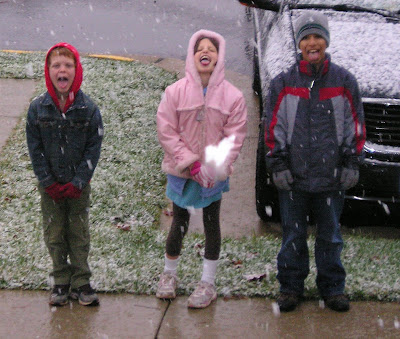 We did end up with a small accumulation of snow that day. It was enough to sled down the hill. We did not own any snow gear - I hate to buy it because you cannot count on needing it around here. My poor kids played in the snow in tennis shoes and ended up very cold and wet. I ended up with lots of wet pants and socks to launder. They would get too cold to play so they would come in for some hot cocoa and change into dry clothes. Before long they couldn't stand to be inside looking at the snow anymore, so back out they would go. Time after time.
So when I heard yesterday that we were supposed to get a lot of snow overnight (thank you Joel!) I rushed out to buy boots and snow pants. I was not alone. I think the whole state was buying snow gear. The first store I went to had 4 pair of snow pants left, 1 size 5, 2 size 8 and 1 size 12. I bought both 8's. They'll come close enough to fitting each kid. (They were 50% off. Yeah!!!) The boot section was decimated. I did manage to find a pair for Anna, although I fear they may be more fashionable than useful. I went to 5, yes FIVE stores looking for boots for Ethan. The scene was unbelievable. The shelves were empty. At Famous Footwear there was another mother searching desperately through the few stragglers that remained. She told me she couldn't find two boots in the same size. She chose 2 that were close. I found one boot that was 1 size smaller than I wanted but there was nothing else anywhere close to the size I needed. How in the world does that happen?? Eventually I found a pair of rain boots which I scooped up. They will be better than tennis shoes, I hope.
Hopefully there will be pictures of happy kids to post later today.

Posted by bristowmom at 7:00 PM

I love the packaging! Great job.