No puppy pictures today. I realized I've taken videos but no still photos. Just a quick update: I think perhaps getting 2 was actually a very GOOD idea. They play with each other rather than looking to me for entertainment. And I think they learn from each other and even compete. For example, Jade was the first to be brave enough to go up or down steps. Jasper didn't seem to want to do it, but after she saw Jade do it she followed suit. So far they seem like pretty good dogs and things are going well.

Last Friday I kept the kids home from school because it was ALL about Halloween that day, and we don't celebrate Halloween. Eric also took the day off and we did a little exploring. We found this very cool park somewhat close to our house. (It's not walking distance, but just a five minute drive.) 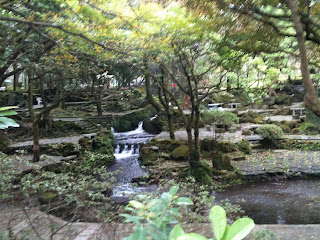 The park is full of ponds, streams and waterfalls. We all loved the park. There is one negative: it smells bad. There are a lot of hot springs on Yangmingshan and they smell strongly of sulfer. The smell was pretty powerful in the park, but at least it was a natural stink! 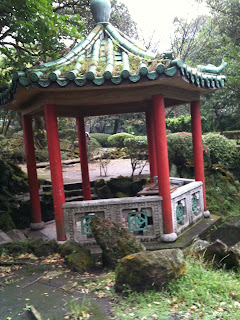 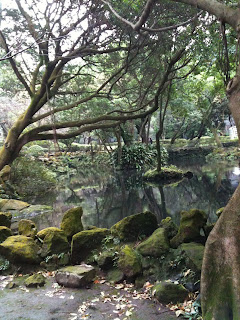 I'm guessing this was placed here as art, though I'm not certain. I like it because it is covered in moss. 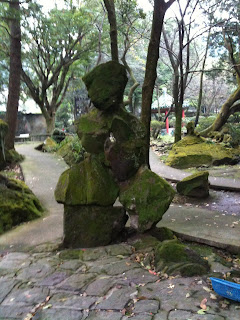 All through the park there are picnic tables, but they are not the same type as in America. Here they are made of natural materials. Many are just stone, one which I thought was wood was actually concrete made to look like wood, and there were a couple with beautiful granite tops, like this: 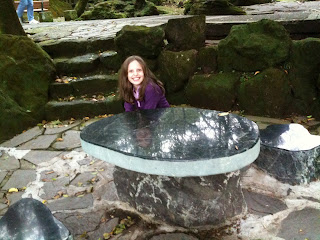 These pictures were all taken on my phone as I didn't have my regular camera with me (again!) I need to go back with my good camera because I think I could get some neat pictures.
Posted by bristowmom at 3:53 PM

Well, they look very good pictures to me! What a fascinating place, and how nice that you opted out of the awful Halloween to have a family day.

...But you could have celebrated Reformation Day! Ha ha...

Looks beautiful, and I think it was probably a good idea you got two puppies too on many levels. Sometimes we wish we had another one to keep dull Alice company, but we have reached our limit with her, or at least, I am just not a dog person and I would be the primary caregiver and I am too selfish!

I hope you are all getting some sleep and things have settled down! We miss you!