I have been snapping random things here and there with my camera phone. None of them are worthy of a full post, but I think they're worth posting together just to give a little glimpse of things.

The Taipei Flora Festival began last week. There is a large arena which I assume must be full of floral displays. I hope to see it soon and take pictures. In the meantime there are various floral displays around the city and this is one of them. 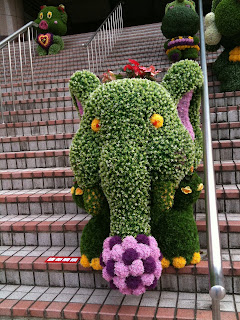 The people here have what is to me a strange love affair with cartoon characters. I cannot quite put my finger on what seems strange about it. So I have to admit I was a bit disappointed to see this display. I expected, or hoped for, something prettier.

Last weekend we were just leaving home when we spotted this man on horseback. Initially they were standing inside the bus stop which might have made a funny picture, but I wasn't quick enough. Even so, it was strange to me to see a horse amidst the hustle and bustle of Taipei. 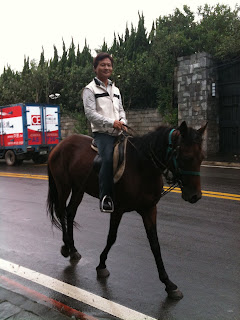 While going to lunch with a friend we came upon a store in which I fell in love with many things. This was one of them: 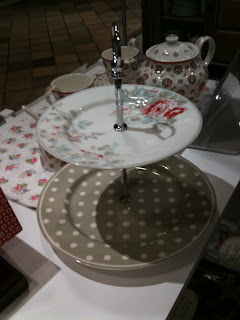 During lunch another friend joined us. I did some emotional unloading on them after which they felt so bad that they each bought me one of the items I had oohed and aahed over - this tray being one of them. I was shocked and touched. Some readers will likely think this tray is strange, having 2 different patterns. That is part of the reason I love it!

Another day we went to dinner with a family that will be moving here next month. We have been friends since we lived in Boise so we are excited that they will be joining us. We ate at an Indian restaurant and Anna snapped a picture of what is one of my favorite foods in Taipei: Samosas. 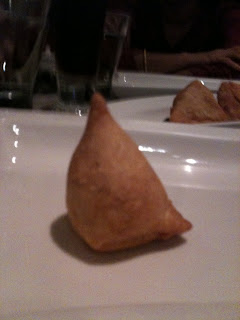 Finally, every day as we wait for the school bus this man "cleans" the streets. I strikes me as an amusing waste of time. To the best of my knowledge he never removes debris, he just blows it around. I think one day he starts at the bottom of the mountain and blows everything upward, then the next day he starts at the top and blows it downward. 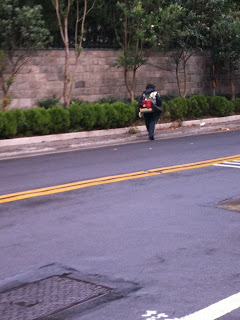 Posted by bristowmom at 7:16 AM

Interesting random things! I agree, its sad that the flower festival is cartoon characters...they could do so many lovely things.
How lovely that you will soon have old friends nearby, that will help to settle into this new country.

I'm so glad today is good day, your photos are lovely. Thank you so much for your kind comment on my blog. Blogs make the world much smaller...don't you agree? Enjoy your new home. What an interesting life you must have.

A horse at the bus stop - now that would have been an interesting picture for a caption competition.