On Wednesday a realtor named Susan took us on an all day, whirlwind tour of Taipei.

We started at the Sun Yat-Sen Memorial Hall. I think this was the least remarkable thing we saw. 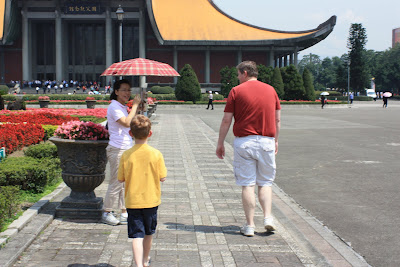 Our next stop was the Confucius Temple. (I think! I am questioning whether that is what this is called. I may have to post a future correction.) The setting is beautiful and the buildings are spectacular. In some ways this place reminded me of Gettysburg. There were information boards lining the courtyard corridors which told about the battles during their Revolutionary War. The 2 large side buildings are memorials to soldiers who died fighting for their country; the smell of incense wafts out from the side memorials. The large central building also honors people who died for the country. Apparently those honored in the central building were very important people. 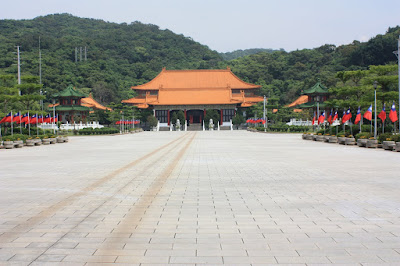 Hard to believe, but this is set in the midst of a city of 2.6 million people! 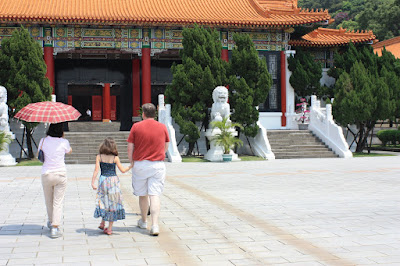 To give you an idea of the size of the buildings, here is Anna standing at a door to the courtyard: 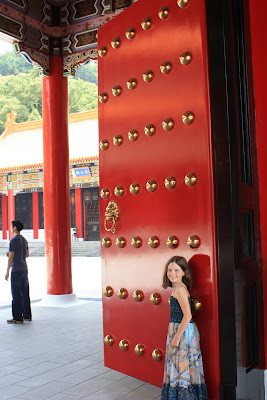 I've never considered myself a fan of Asian architecture, but now that I'm here I find it to be extremely beautiful. I never caught what the connection is to Confucius. Maybe on a return visit... 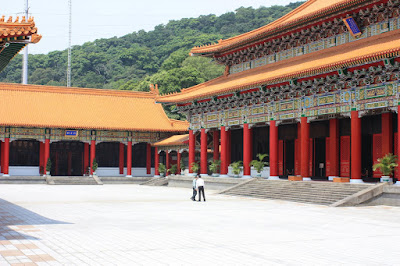 A close-up of some of the detail: 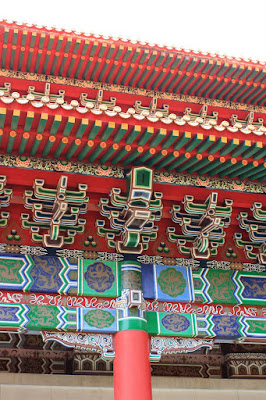 This is the gate through which you enter the grounds of the Confucious Temple. There are guards posted inside the gate, and there is a formal changing of the guard every hour. 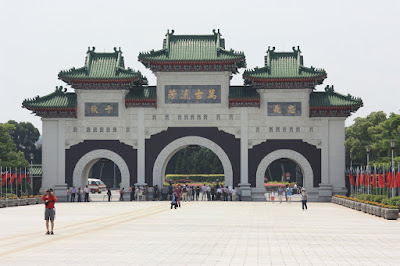 Here is one of the guards. They are so motionless that it is almost eery. 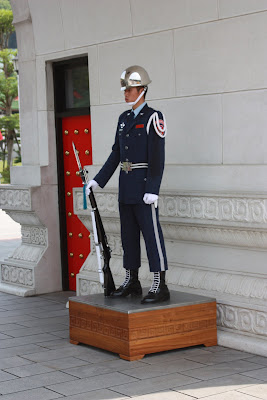 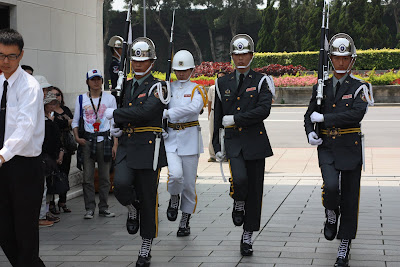 The marching style is different. Our tour guide took us away before the ceremony was complete, so I guess I'll have to go another time to see the entire thing. 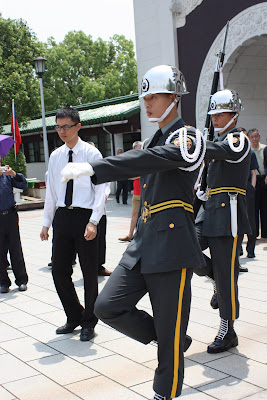 Next we went to the National Palace Museum. I'm sorry to say this, but I hate museums, absolutely hate them. I can look at architecture or flowers all day, maybe even art, but something about walking past cases full of artifacts drives me to tears. However, our guide graciously purchased tickets for us and took the kids to the childrens area so that we could tour the museum so we felt obligated to look at some of the stuff. I managed not to cry because there was some art, but I have no appreciation for the Dynastic periods and their various vases and artifacts.
When we returned to the children's area we found our kids and Susan practicing an old form of Chinese rubber stamping. (My term, not theirs!) These two ladies were watching not because they were interested in the stamping but because they were interested in our kids. The kids had their first taste of standing out in a foreign land. Everywhere we went people pointed, giggled and took pictures of the kids - especially Anna. We are not sure, but we THINK we heard one boy say "Hannah Montana!" 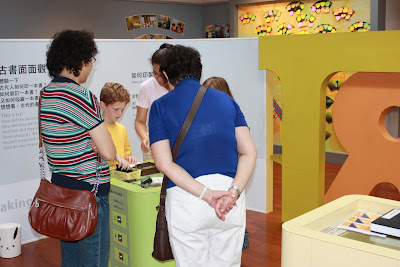 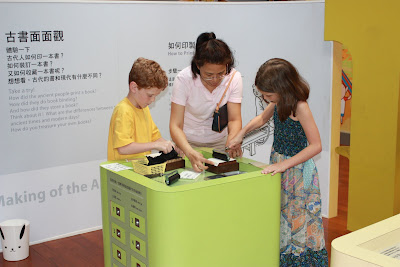 This is the outside of the National Palace Museum, which is a hundred trillion times more interesting to me than the inside: 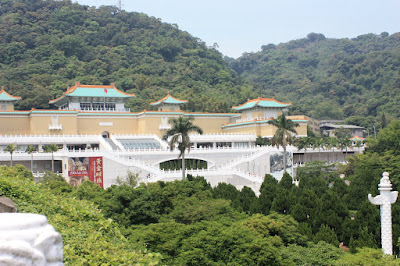 The building itself is so beautiful and, again, can you believe the lushness around it?
A bit of a sidenote here. The next buildings are condominiums across from the National Palace Museum. Susan said they are just 6 years old and they look very nice, but they are having trouble keeping residents. Susan asked if we knew about Feng Shui. I know ABOUT it, but not much. Chinese people believe very much in Feng Shui. These buildings are facing the National Palace Museum which is full of very old artifacts and Feng Shui says that there is a lot of strong energy coming from the museum and so, to live in these condos, you must have very strong energy - stronger than that in the museum. No doubt I am not getting that story entirely correct, but it was something like that. Jesus came to break the chains of bondage! Here is a good example of some of the bondage people live under. 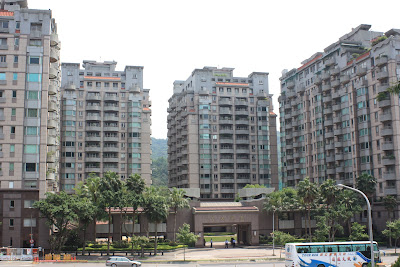 Next we went to hot springs. Once again, I have forgotten the name of this. I have a photo a bit further down that says Beitou Thermal Valley, but I cannot remember if that was a seperate location from this or the same - forgive my ignorance! Anyhow, this is a house that was built during the time of Japanese colonization. It was beautiful. 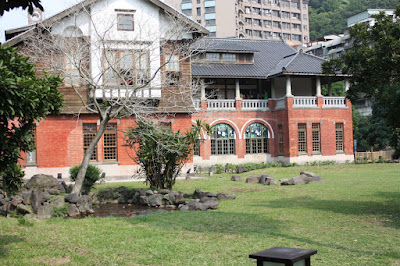 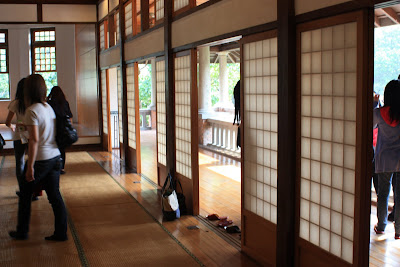 Ethan refused to go into the Japanese style house because you not only had to remove your shoes, you had to wear some slippers that were provided. He was okay with taking his shoes off, but he was not about to put those slippers on! So he and Eric waited outside, where they were entertained by this gentleman. He showed them newspaper clippings with his picture. He told us (through Susan) that the instrument he was playing is over 100 years old and he has owned it for 60 years. I believe in the newspaper he was playing for dignitaries in China. (Not sure about that.) 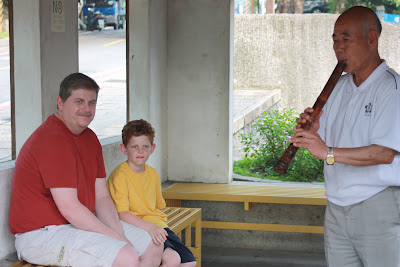 Also while they waited for us, Eric said several groups of school kids passed by and all of the girls were taking pictures of Ethan. He didn't like that too much. I guess he's not interested in being a super star! (Actually neither is Anna. She is already tired of people staring and taking her picture. I told her that is what it is like for Hannah Montana ALL the time. I think this trip will cure her of any desire to be famous!) 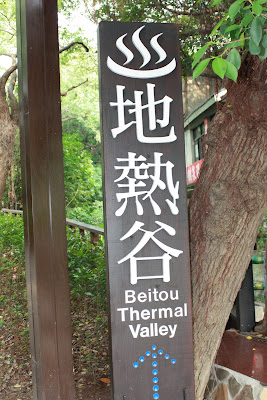 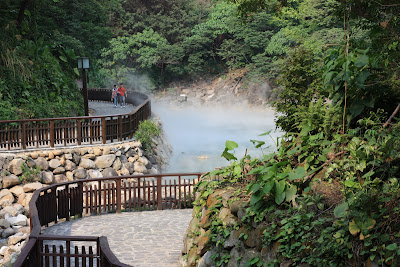 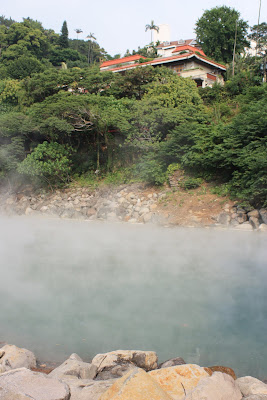 Another hot spring area. Susan said not too many people know about this area. It is somewhat similar to Yellowstone, with geysers bubbling out of the ground. 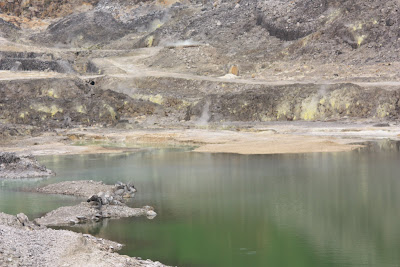 You probably have to click this picture to see the detail. I asked Susan about the terraced ground and she said that is farmland. 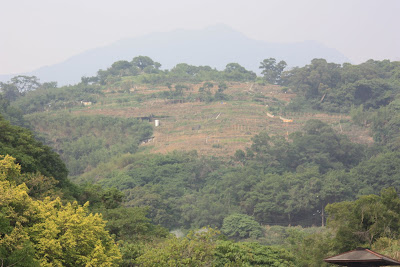 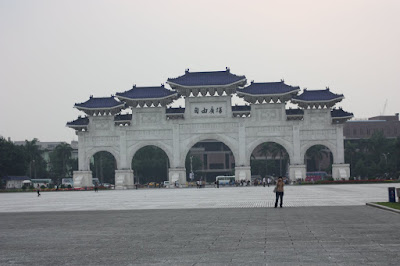 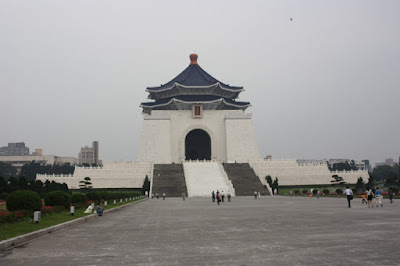 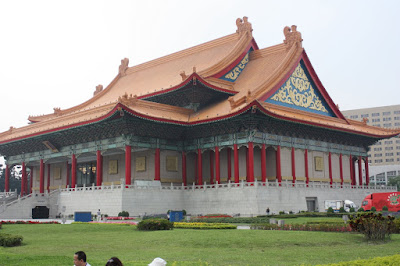 One final picture: Eric and the kids with our hostess Susan. We had a great day, but we were all exhausted when it was done! 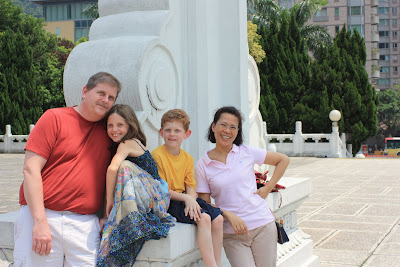 Beautiful! Better get Anna a wig so she can play up her star status! I wish your Mother was feeling better, am sure she would love to see and read your grand adventure. By the end of the few months Ethan will be wearing "house shoes" with ease.

Gorgeous pictures! thanks for the tour.

I have a friend who tells us stories about her family living in, I think Taiwan when she was a kid too. She had a blonde haired son, and everywhere they went, everyone wanted to touch him. (for luck they said).