The Park Near our Apartment

Just around the corner from our apartment is a very interesting neighborhood park. Anna gave me a tour yesterday -- she had already been there with Eric. There is an unsightly fence at one end, but it has been covered with artwork advertising the Taipei Expo. I don't know what that is, but apparently it is going on now so maybe I will find out. 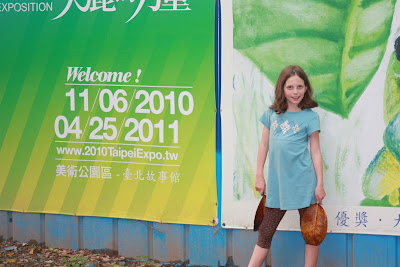 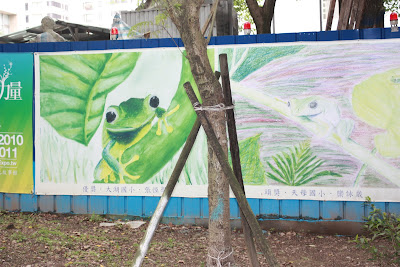 It looked to me as if a lot of life is lived in this park. There were lots of old men sitting at tables talking, near what must be some type of religious shrine. There was a lovely smell of incense coming from the building. 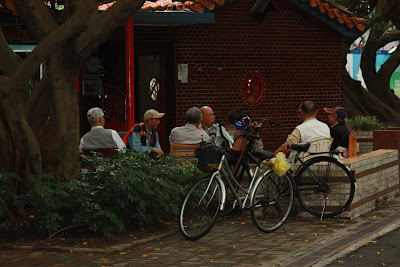 There were old men exercising. We saw a very old man doing pull-ups on a monkey bar - type thing. The old man in the blue jacket below was doing squats.

This old man was tidying things up with a very interesting, natural broom. 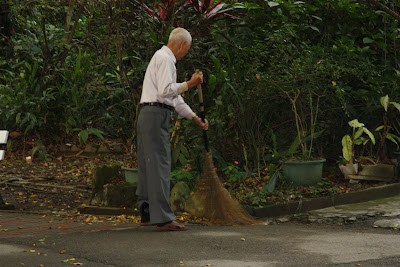 There was this rose garden which didn't seem to belong to anyone. It did not appear very well tended, yet it was beautiful in its "naturalness". 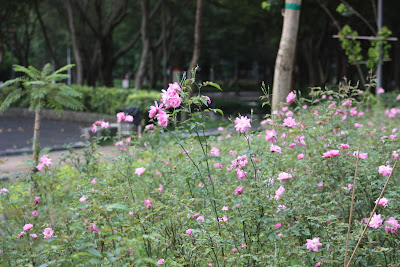 Here and there at the perimeter of the park there are some housing units. They are sort of integrated into the park, not set back by any type of boulevard or anything. Some of the units looked like they were just one room. I tried to get a good look and wanted to take pictures, but there were people in front of most of the places and I felt like I would have been invading their privacy. I am guessing that their living accomodations are very minimal, and so the park is where they gather to socialize.

The ground behind most of the housing units rose sharply. There were gardens behind some houses. Just above the roof line in the next picture you can see a woman in red. She was tending her garden. 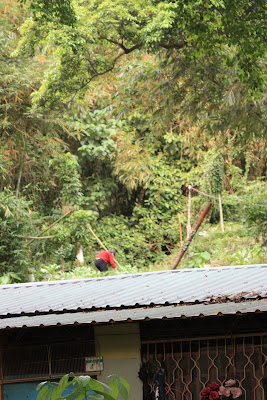 Just after passing the very modest housing area I came to this, which I believe is a private house. (it is very pretty.) 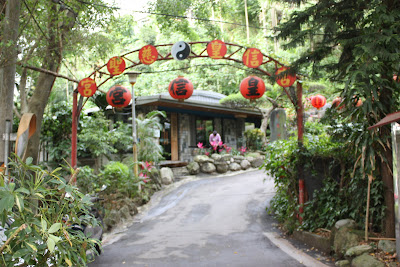 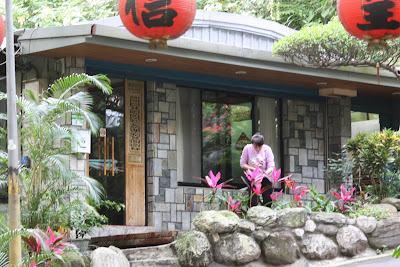 The park includes a basketball court where many young men were playing basketball, and a children's play area. It looked as if there were many grandparents taking care of the little children. The park was full of very old and very young but not too many people in between. It was a weekday so I suppose the "in between" people were all at work.

There are chickens roaming the park. Anna thought it was fun to chase them. 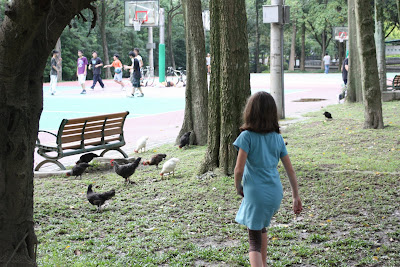 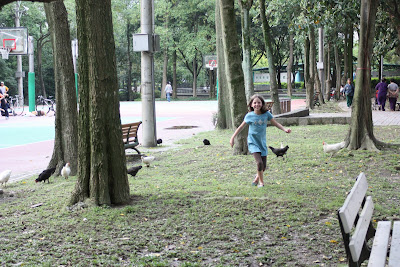 And there is this stone area which, according to Anna, is supposed to be a foot massage. She tried walking on it but it didn't feel too good. 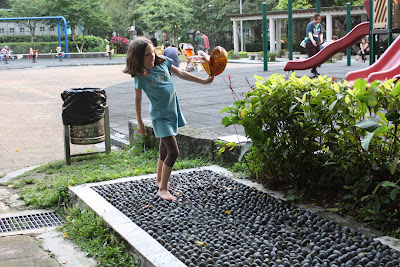 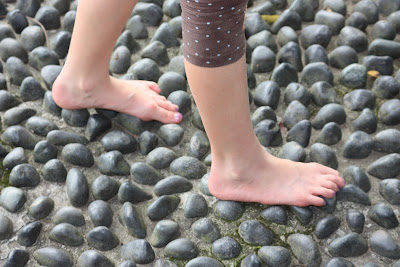 I very much enjoyed the park because it seemed I was viewing a slice of real life, Taiwan style. It is so different from anything I've experienced in America. Our parks are clearly set apart from our homes both in location and purpose. But here it all seems to mesh into one. I cannot tell where the private home area ends and the park begins. Similarly, it doesn't appear that people take time to "go to the park" like we do in America. The park seems to just be an extension of their home and it is where they "live", with their neighbors.
Posted by bristowmom at 6:06 PM

So awesome! Anna looks so excited. Except when walking on rocks. Tell her next time she gets to try the fire-rocks. You are going to have a great experience. Enjoy!