Some time ago I read a blog post done by someone I don't know, and it moved me to tears. It was written by a woman whose grandparents were moving from the home they had always lived in to an assisted living apartment. She chronicled, with words and photographs, the home they were leaving, the moments she remembered around the home. It was so touching.

So when I flew "home" to Idaho 3 weeks ago to help my Dad with whatever-he-needed-help-with following the death of my Mom, I knew I wanted to do something similar. I wanted to photograph my Mom's home so that I could retain some of my memories of my Mom.

I know I did the right thing because, although Mom had only been gone 2 weeks, Dad was already changing things. Here is the most glaring change: 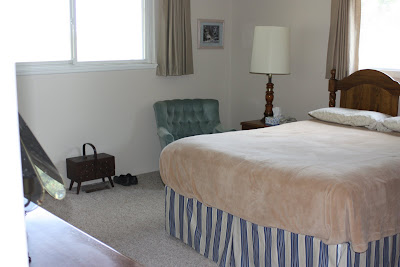 This was Mom and Dad's bed. Except, different. Mom always had a pretty comforter, pillow shams and extra pillows on the bed. Dad told me that back before Mom got sick, when they would make the bed together every morning, he would always question her as to why they had to put all that extra stuff on the bed. It was illogical to him because it was just to look pretty. So, I guess, as soon as she was gone he stuffed the pretty things in a closet and now just has the necessities on the bed.

The rest of the house I was able to capture pretty much as it had been when Mom's presence graced it's rooms. 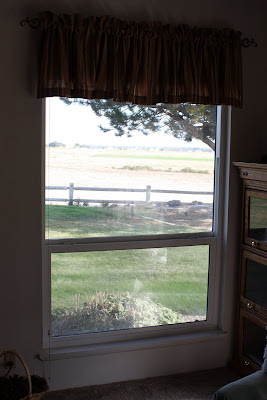 Good-byes always made Mom cry. After I saw her in March, (the last time before she got sick) she wrote and told me my visit "seemed like a dream". It had gone too quickly. Yes, it surely did. 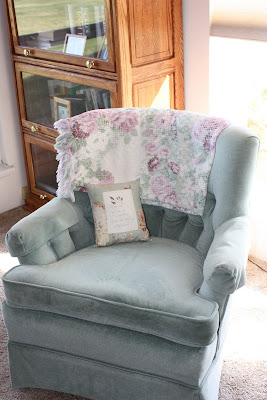 and always a lace tablecloth on the table. (The piles would not have been there except Mom had died. These were piles of things Dad needed my help attending to, and they would be gone after my first few days there.) I expect the tablecloth is probably gone by now. On my last day there Dad remarked that he didn't know why that was there. Unnecessary. I supposed in truth it is a painful reminder of Mom to Dad, and he is trying to remove the reminders because he cannot stand the pain. 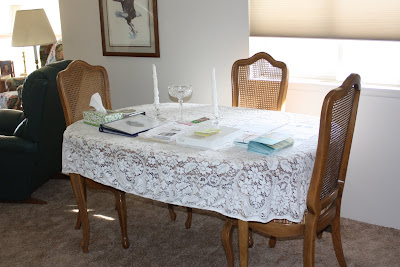 The couch which Mom had recovered in a fabric she knew I would like. (It had grapes and grape leaves woven in. I found some extra fabric in a closet and brought it home. I am going to make place mats with it.) In good times the tacky pillow was not there, but in her final months Mom lay here often during the day. Dad told me that whenever people came to visit, which they FREQUENTLY did, Mom made him hide the pillow away. It didn't matter how sick she was, she wanted things to look nice. 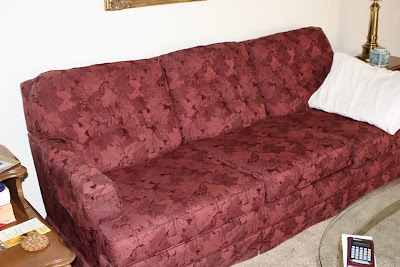 This table next to the couch is where Mom kept her supplies for working the crossword puzzle each day. The pencil sitting there is just the way Mom would have left it, although under it would have been the day's puzzle. I can imagine her sitting down and picking up that pencil to work on the puzzle a little more. I looked at the papers which were now under the pencil, and I am rather sure Mom left them there intentionally for Dad. Mom was famous for giving out Christian tracts. She mailed them often to friends and family. They addressed issues we were currently facing. One of the tracts under the pencil was titled "God Will Take Care of You". I don't know if she was concerned about how Dad would do after her death, or if he had told her he didn't know how he would manage without her, but in either case this is just the way she would have handled it - by leaving him a tract. 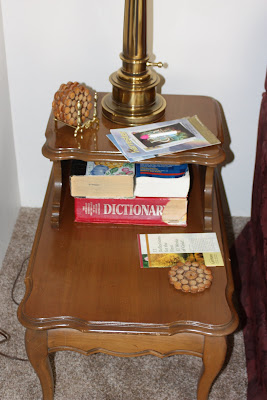 Inside the table she kept crossword dictionaries and a regular dictionary. This one was so worn out that she had recovered it with floral contact paper! 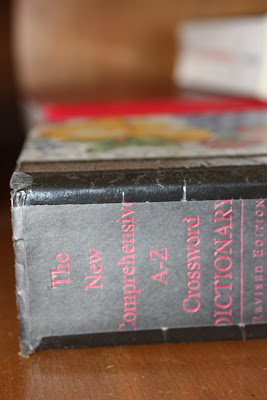 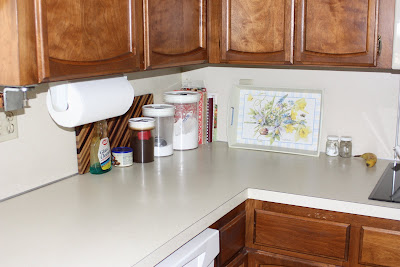 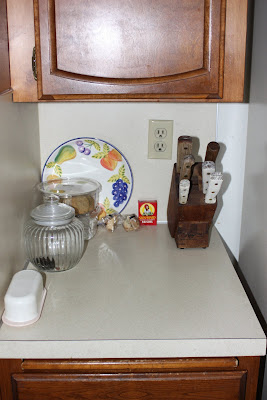 And for visiting grandchildren, this little teapot was always full... 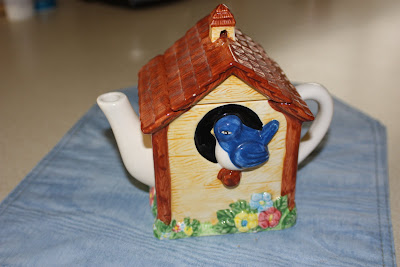 ...of candy! My kids always knew they could have candy from Grandma's candy jar. 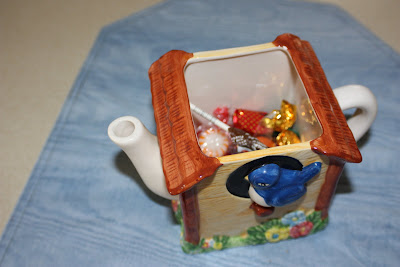 I remember when I was a kid and Mom and Dad bought this desk. It makes a particular noise when it is opened or closed. I had to get in to it several times while I was with Dad and each time the sound reminded me of Mom. What a silly little thing to remember! 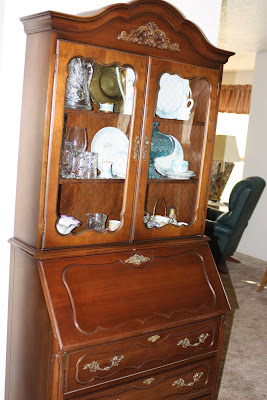 More of Mom's pretty things:
The tray on her dresser. 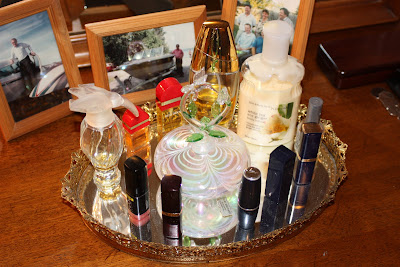 The shelf which contained her collection of angels. Dad had the shelf custom made for her by a friend of my brother Paul. 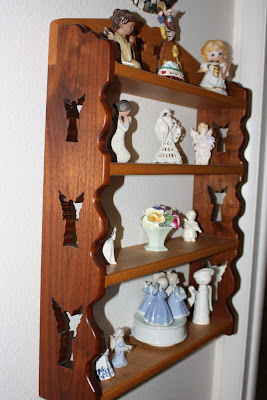 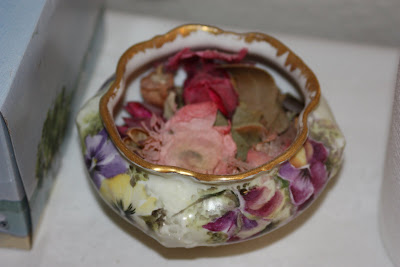 Glassware by her bathtub! 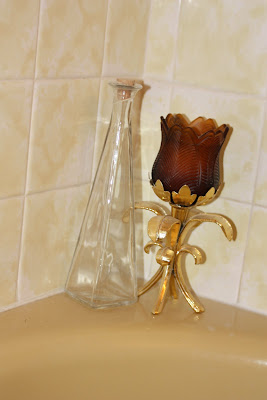 Silk pansies. I have said for years that pansies are my favorite flower. I had not realized before this visit how many pansies Mom had around the house. Were they her favorite also? Why had I never asked her? 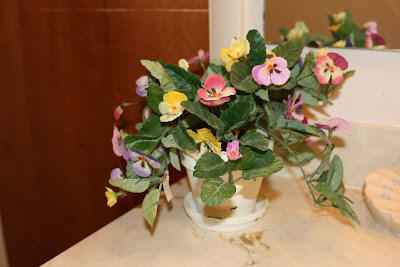 This picture was a gift to Mom from my brother Todd, I believe when he left home for college. I think it summed up the feelings for both of them. 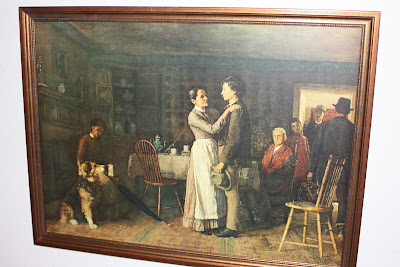 Long ago Mom used to embroider, and she made this picture. 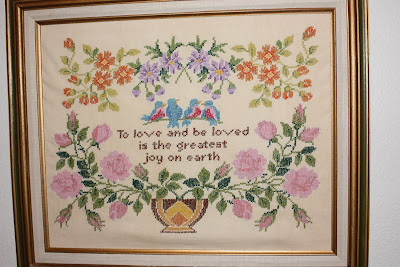 Mom had a lot of books. She didn't ever read a novel, that I know of. She read biographies and books about God and the Bible. Mom was a student of Gods Word, always. This bookshelf contained just a few of her books. 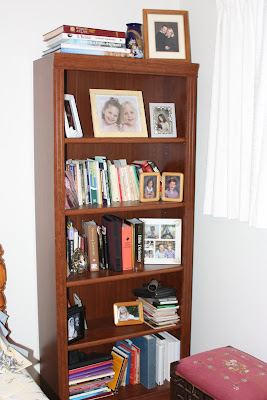 Another bookshelf, although it doesn't contain a single book! This is in her bedroom. 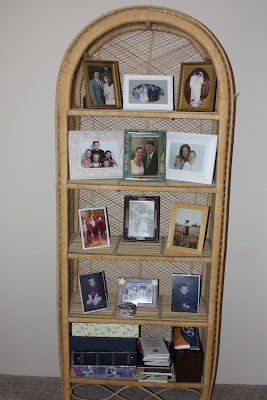 This is the computer where Mom typed letters to her friends and family. Sometimes they were delivered via e-mail and sometimes she printed them out and mailed them.
She also read blogs here. This one, as well as those written by one son and several daughters-in-law and one granddaughter. 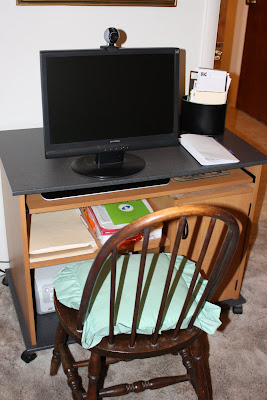 Next to her computer Mom kept notes and letters she had received from family and friends. She also had BOXES full of our letters. I was actually surprised to see how many people she corresponded with, and how frequent the correspondence was. There is no one in my life anymore that writes a real letter to me. Mom was the only one. 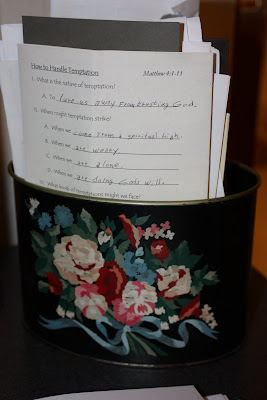 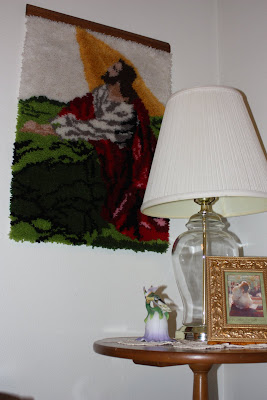 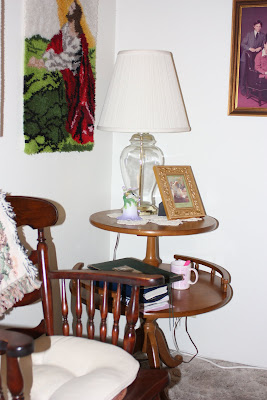 ...this is where Mom prayed. 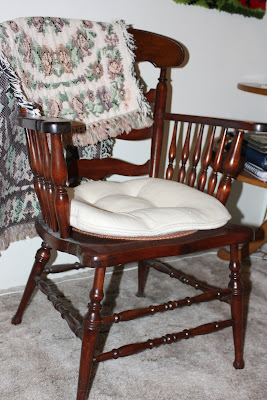 Well, your post brought tears to my eyes too. What a beautiful lady your mother was, it glows through every part of your post, and every photo.
You must allow yourself time to grieve too.

PS. I love writing letters, so if you want to e mail me with your address....?

I would like to exchange links with your site bristowmom.blogspot.com
Is this possible?

I love this post. Thank you for taking the photos before your dad changed everything. He should not be expected to keep the house as a museum, but it is wonderful for the rest of us to have the memory preserved in your blog. - msw