A quick glimpse beyond Taipei

Eric wisely decided that we all needed to get away this weekend so, with the help of a wonderful secretary, he planned a QUICK getaway to the very southern tip of Taiwan. We went to an area called Ken ting, which has a National Park and several resorts. To get there we first rode the High Speed Rail for 2 hours, then a tour bus for 2 more hours.

Here is a picture of the bullet trains. I guess they're not actually called that here - that's in Japan. I made the mistake of telling the kids we were going on the bullet train. Ethan asked why it was called that and I told him it is because they go "faster than a speeding bullet". He was disappointed because they do not actually go faster than bullets. Still, it was a nice way to travel. If I could, I would go by train all the time. I prefer it to any other type of transportation, and I think I've tried them all. The High Speed Rail is clean, quiet and fast. There is no annoying security like at airports; I don't fear for the lives of all around like in a Taipei taxi; the employees are not required to act foolish like on a cruise and when it is time for the train to depart the station it just GOES without fanfare or drivel about seat belts and oxygen masks. I loved it. 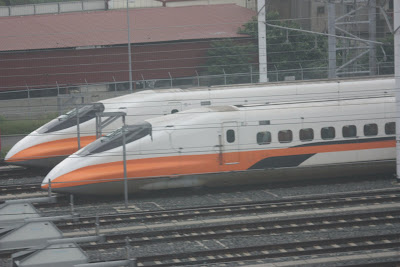 It was so refreshing to break out of the busyness of Taipei, into the surrounding countryside. 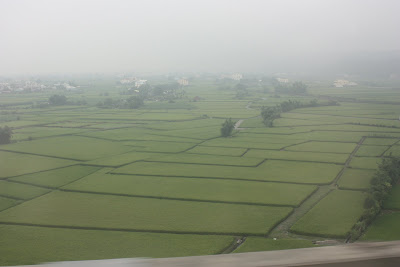 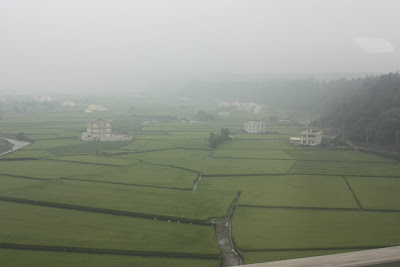 I guess I should be informed about the pictures I post, but I am not. I just photograph things that look interesting. Like these fields covered with some sort of fabric. I don't know what grows under them, but I thought it looked neat. 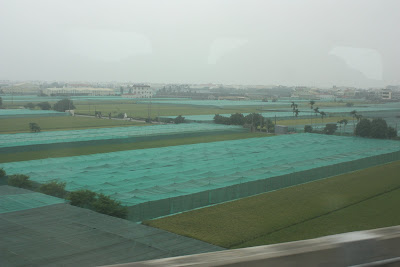 Yes, it is still raining and raining in Taiwan. Nevertheless, I don't think these fields are flooded, I think they are supposed to be under water. Rice, maybe? 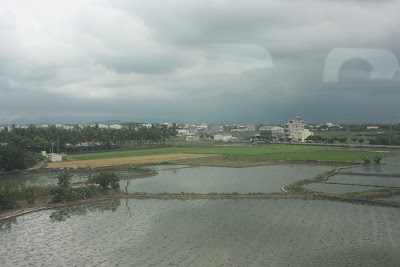 Not a bad farmhouse! Although I bet they have problems with mosquitoes! 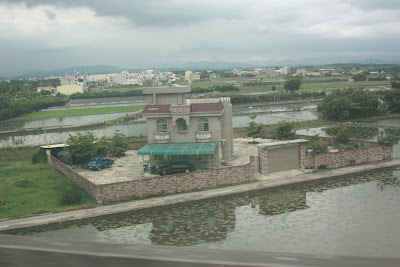 Anna thinks I have lost my mind because I've begun photographing cemeteries. But they are so very different here than in America, that I just thought I had to show what they are like. Actually this is probably not a good representation because it is gray and bland. Most that I've seen around Taipei have brightly colored and highly ornamented tombs. 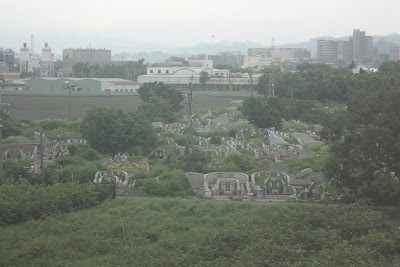 This next picture isn't the best and I may be COMPLETELY wrong in what I think it is, but... I have noticed many similar places that look to me as if they may be someone's living space. I hope not. 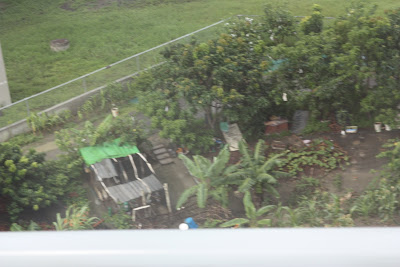 As I've said before, there are temples everywhere. On this trip we passed two with HUMONGOUS statues, like this. I was too far away to tell what it is. It doesn't look like Buddha to me but I'm not sure. 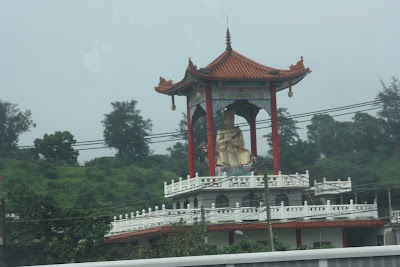 One of the few English TV stations here is National Geographic Explorer. We watched a program a while back about a man in Taiwan who races pigeons. That is apparently a huge sport in Taiwan. The participants have pigeon coops on top of their home or business. We saw several on our trip. Here is one, at the top of a home. 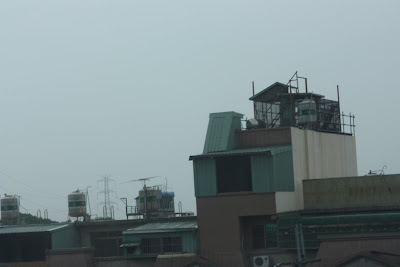 Kenting is supposed to be a sunny, tropical location. However, as we approached it rained steadily harder. We were only there for 1 night, so had to make the best of things. Here is the view from our balcony, just after we checked into our room. 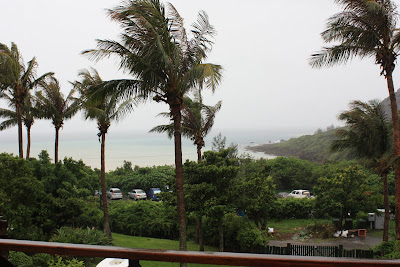 It was pouring rain, but since it was supposed to be that way all weekend we decided to explore the resort grounds in the rain. It was a very beautiful place with a fabulous pool. 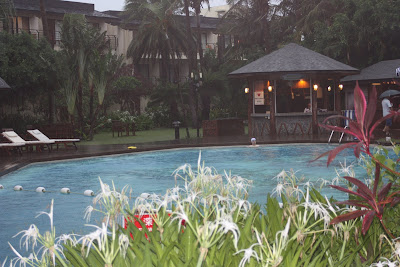 There are resident parrots. Their names are Boss and Anna! And yes, they are real live parrots. 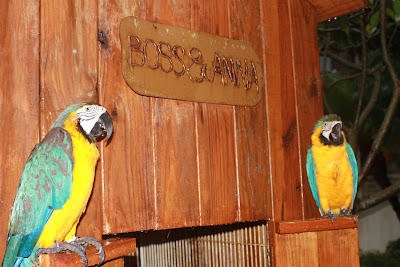 The next morning it was overcast but not raining so we rushed to the beach. We didn't even have coffee or breakfast! The resort we were at has it's own sort-of-private beach. 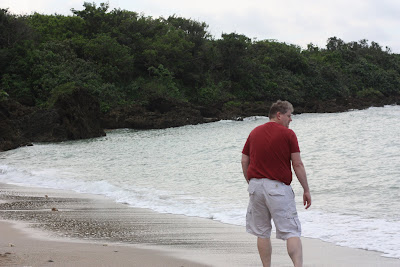 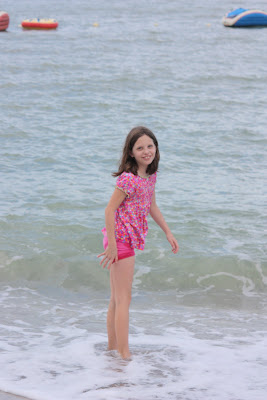 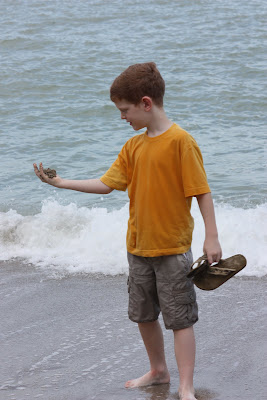 Eric and the kids got wet, so they went back to the room and changed into swimsuits. And SURPRISE! The sun came out! 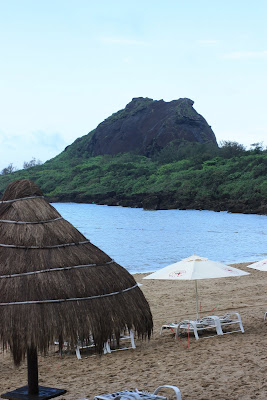 I saw this boy and his family and just had to take a picture. LOVE the outfit! His sister was in a similar sailor outfit. They sort of reminded me of pictures of Americans in the 19th century vacationing at the ocean. Seems they all wore nautical type clothes. 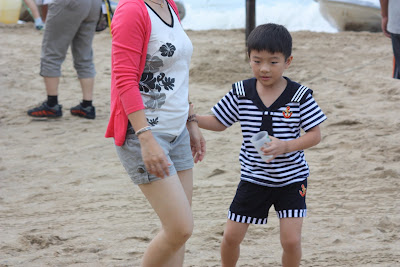 Eric and the kids swimming in the ocean. 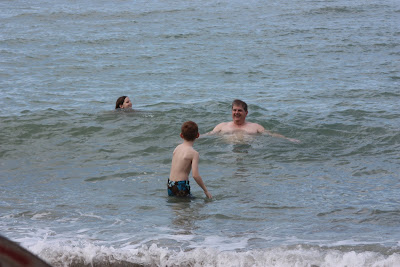 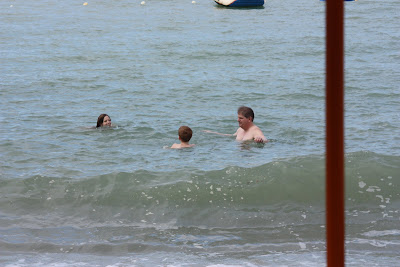 We ended with lunch at the beachside restaurant. 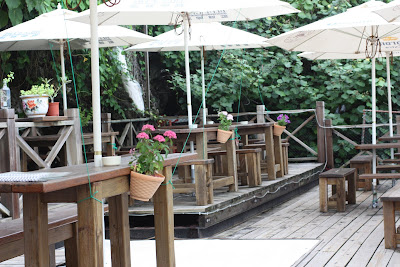 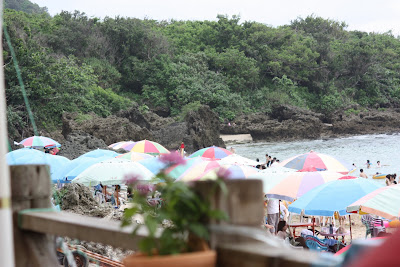 We had to board the bus for home at 11:30 a.m., which was perfect because that's about the time it started to rain again. No kidding.
Posted by bristowmom at 4:17 PM

I hate the sailor outfit, but my mom used to make me wear them when I was little and that stunk.

The beach is in credible! Wish we could have been there with you all! Love the cemetery shots!

Nice photos. It looks like a nice resort. I will trade you a little sunshine for some of your rain!

I've just been reading through your blog and found it so interesting. I cant imagine what it must be like to move quite as much, but I imagine that is to do with your husband's work.
Thank you for visiting me in France.