Ramblings from The Twilight Zone

We had a wonderful adventure today, but I didn't bring my camera. Why not, you ask? Nope, I didn't break it. It's just that, since I bought a BIG camera, I always have to haul around a big purse to put it in and today I just didn't feel in the mood to lug the big thing around. I probably should have bought a little camera, although by now it certainly would have been dropped twenty times. I'm rambling. Sorry. I'll try to describe the adventure without pictures. And in case I fail, I will retrace today's steps WITH a camera someday soon. (I told the kids we will return and I will bring my camera and they moaned and rolled their eyes and grumbled. I brought it to the zoo the other day and made them stop half a zillion times for me to take pictures of flowers. They are learning to HATE the camera. To counter that, I let them take pictures sometimes. But I'm rambling again.)

Today we went to "THE" fabric market. Gloria had written its name in Chinese for me. I showed that to a concierge at our front desk and she looked up the address, which she wrote in Chinese for the taxi driver. I had also read about the market on a blog, and the blog had pictures, which I was glad for when we arrived. "The" fabric market is surrounded by many, many stores selling fabric and custom made clothing. Thanks to the pictures on the blog I knew the place I was headed for was on the 2nd floor of a building, and when we pulled up I knew I was at the correct building. How to get to the 2nd floor presented a bit of a challenge.

We first tried an outside staircase that looked promising. When we got to the top there was a set of double doors with a small window. Looking through the window we could see bolts of fabric so I knew we were at the right place. However, there was a sign on the door - all in Chinese, and an arrow pointing to a different door. The other door looked somehow less inviting, so we decided to go back downstairs and see if we could find another way in.

Now, honestly I don't know what we walked into next. Upon first entering a large open area of the building we noticed food vendors and a few spaces selling tacky looking clothing - like Walmart rejects. I was beginning to despair, thinking perhaps the fabric I had spied upstairs was wholesale and it was being made into this awful stuff for public consumption downstairs. I must have begun to look panicky because a nice Chinese lady offered to help me find what I was looking for. I showed her my aforementioned Chinese instructions and said "fabric market". She smiled, nodded, gestured and said "all around". Thinking back now, she must have meant there were fabric stores all around this building, because there were. But I thought she meant all around this place we were standing in, so I nodded, said shei shei and began walking "all around". Oh goodness! Crazy stuff everywhere, but only one thing made it into my memory bank - probably it overwhelmed all other mental pictures. Chickens! In various stages of life and, umm, NOT life. Lots of live chickens in cages. Then, I think, a butchering table, then chickens being cooked and, finally, cooked chickens hanging in a case. The thing about cooked chickens here is this: the heads are still attached. They have that THING on the top of their head. (I have no idea what it's called.). The cooked chickens have their heads hanging there with that THING wobbling around. It's gross. And next to the butchering table a woman was hosing down her days work. It was all heading toward the drain which was inches from my feet. And I was wearing sandals. And my kids seemed frozen in place. And I wanted to GET AWAY!

Somehow, we got out of that twilight zone place. I don't know how we got in and I don't know how we got out, but we did. And then, thankfully, Anna somehow spotted a staircase that took us to the fabric market. And the fun began. Any kind of fabric you can imagine was there, and quite a lot of fabrics that you probably haven't imagined. There is felt in every color under the sun. There are satins and cottons and tulle. Fake fur looking like tigers, cattle, sheep, dog (truly!), you name it. There is upholstery fabric, towel fabric, stuff for rugs, vinyl coated stuff, on and on and on! There are a thousand different embroidered Asian fabrics. I didn't buy any today and I don't know what I'll ever do with it, but I think I will need to buy some of that on a return trip. There were places that apparently custom make bedspreads and drapes ( in addition to clothes.) How fun it would be to decorate a room and have everything custom made!

I found the fabrics I wanted at the first booth in the market. Being the wise shopper that I sometimes am, I looked at all of the other fabrics before returning to the first booth. While I debated and puzzled over which to purchase, a kind, old, nearly toothless Chinese man came and began talking to us. Some Chinese, some English. He was enamored with Ethan, as all Chinese seem to be. It's his hair. "Golden" he said. (Actually it's strawberry blond.) "Beautiful boy." Then perhaps realizing boys don't want to be called beautiful, "Handsome!" He asked if we were from America and when I said yes he asked where. I said Virginia. Any time someone here asks me where I'm from they seem to know of Virginia. I wonder - are they being polite or do they really know? He told me he has a son who lives in New York City. I think he might be a wedding photographer. He had an amazing amount of English I thought, especially for such an old man. A younger man came and seemed to try to shoo the old man away. I am guessing he is an eccentric character that hangs around, but I enjoyed him. I don't care if he was a nut. He was a crazy English speaking nut! And he smiled a lot. With his nearly toothless smile.

I will stop rambling now and post this picture of my fabric. (Same print, 3 colors. I loved them all! There were actually more.) Perhaps I'll write something more coherent tomorrow. Or not. Probably not. Coherent, that is. 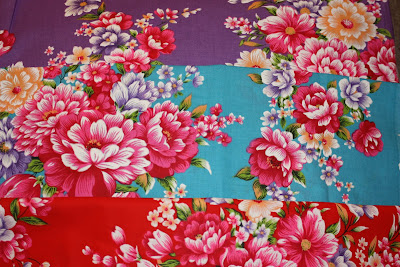 P.S. Does anyone have any ideas of what I could DO with this fabric?
Posted by bristowmom at 8:04 PM

Thanks for visiting and your lovely encouraging comments.
Interesting post and yes would be great with the pictures.

I thin as bloggers our families do pay the price for hanging around while we take photos. My husband has got used to it over 3 plus years.

Looks like you have an interesting life with much travelling.

I will checkout more of your blog.

I think some fun pillows are in order. That way you will have a reminder of your travels back at home in your house in Virginia or wherever you end up! Oh and add some fun ruffles or fringe... I love them all!
Nise