Today was the best day I've had so far in Taiwan. We went to a town called Jiufen. I liked it even better than Yingge, and I didn't think that was possible!

Jiufen was once a gold mining town but is now a huge tourist spot. They have a museum but guess what? We didn't go to it!

Jiufen is set on a hill 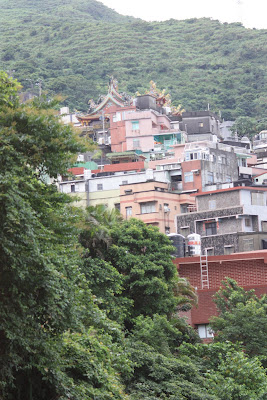 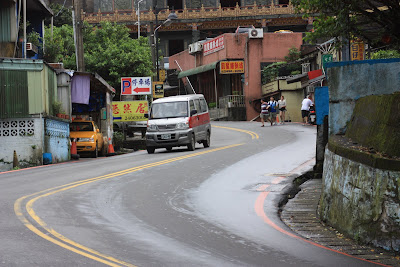 Parking is an experience unto itself. Sadly, I didn't think to take pictures of that. Maybe another time. People stand along the street and beckon you in to their little "garages". They are about the width of a narrow double car garage in the states, but deeper. They direct you in until you are almost bumper to bumper with the car in front of you. You leave your car key with them, so when someone needs their car they can move all of the cars out until they get to the one that is being called for! It's a fairly expensive arrangement too, at least compared to how cheap many things are around here. It costs NT$100 per hour, which is a little over US$3.

So we left our car and walked a short distance to the tourist area. Are you ready for another surprise? It was raining! I am not actually complaining about that anymore. I have learned that when the sun comes out it gets so hot that you feel like you are melting, so the rain is not so bad.

This is close to the beginning of the tourist area. This is actually still outside, but the street is so narrow that the awnings above act as a roof. At one point as we were walking a scooter drove past us, which surprised me. Eric has been here before and he said sometimes trucks actually drive down these streets! I don't know how they would fit! 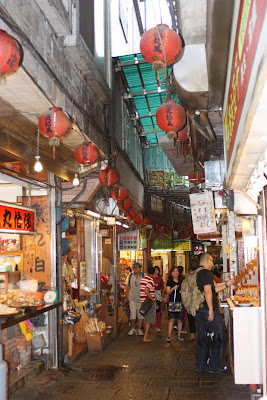 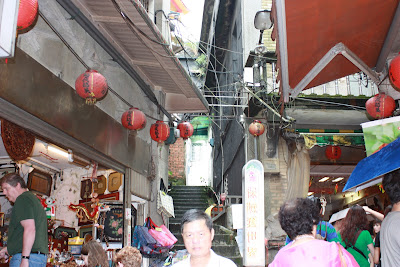 I cannot help taking pictures of flowers. I have loads and loads of them. (And loads! Some day soon I will post all of my flower pictures. Then I'll probably have to post more later because I will undoubtedly find more flowers!) There are a lot of beautiful flowers in Taiwan. I took this photo from the street looking up. Above the businesses are residences, and this particular one had tons of flowers on their balcony - so many that you could barely see that there was a balcony. 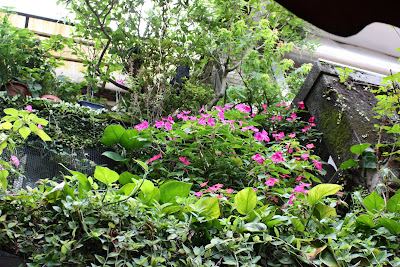 Even the street signs looked pretty to me, surrounded by Chinese lanterns. 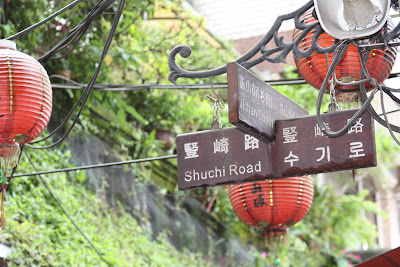 I passed by one shoe store but couldn't pass the 2nd. They had the most unique, beautiful wooden shoes. The first pair I tried on were high heels made of multiple colored wood. They were SO beautiful and unique! But the heel wasn't actually under your heel so walking on them was a little tricky. It made Eric nervous! I was about to buy them anyhow, when I spotted this: 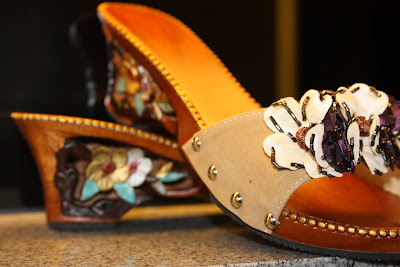 When I was in Hawaii (about 30 years ago!!) I bought a pair of shoes with hand carved heels. I loved them. Not only are the heels on these shoes hand carved, but the flowers are PURPLE! I tried them on. My toes hung over the end. I asked if they came bigger. The girl had no English. She brought me another pair. Same size. I gestured - LONGER. No, she shook her head. She tightened the strap over my foot. No I said. BIGGER. I gestured some more. She gestured. She told me "it's okay". (She has a little English.) Well, as it turns out, at least as far as I can tell, the base only comes in one size. If your toes hang over the edge they make the top part smaller so that your toes can't go down so far. Now your heel hangs over the back. "It's okay" the girl said. She pointed to her own feet. Her heels were over the back. They custom fit them (sort of) right there. So how could I not buy carved, purple flowered, custom fit shoes? I bought them. Here is the girl attaching the strap for MY shoes: 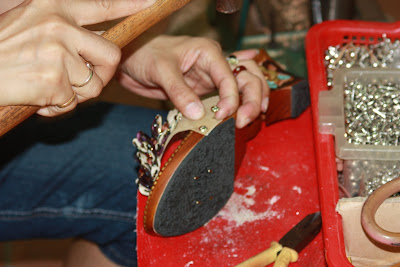 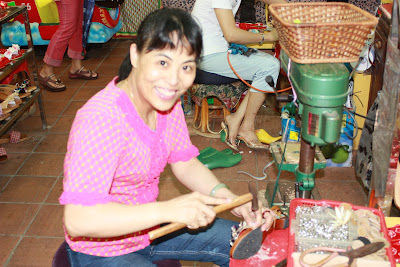 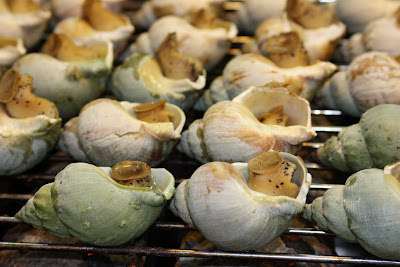 Okay I have to admit, this gives me the shivers. We have snails this size in the creek behind our house in Virginia. I just cannot imagine how hungry I would have to be to eat one of those slimy, nasty things. So, no thanks, I'll pass on the snails.
How about red-hot peppered, whole, tiny fish? You can't really get the full effect from the picture. This was part of a huge pile of little fish. 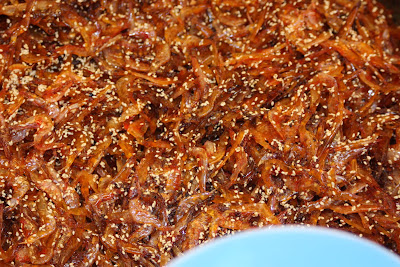 I'm not sure, but Eric says I ate some of these when we went on the realtor tour several weeks ago. I think he's wrong. I think what I ate was shrimp, but it did look a lot like this, so maybe. But I'll pass this time, thanks.
Tried that before, you say? Feeling adventurous? How about squid on a stick? 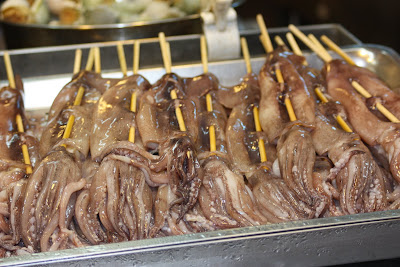 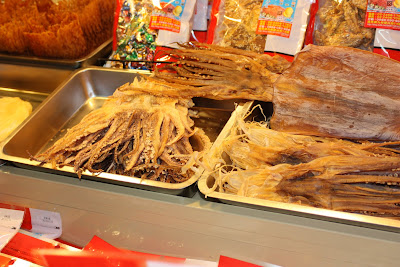 I think I could go without eating for a long time, actually.
However, Eric and the kids are hungry for some "real" food. This, honestly, was the best part of the day. We were taking a break in a tacky little store when I noticed a sign for a cafe. I went to investigate and found the most breathtaking view. Check this out: 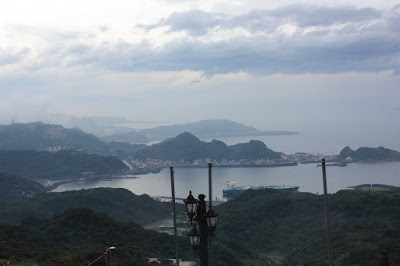 I had no idea we were anywhere near the ocean! Here is basically the same view, but I rotated the camera to show the outdoor seating. On a different, non rainy day, I think I could sit there for hours! 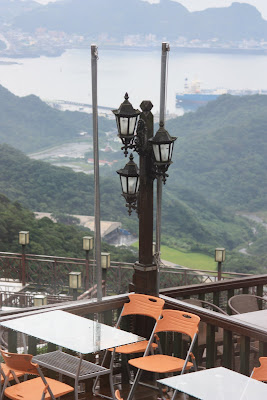 Since it was raining we sat inside. But this was not too shabby either! 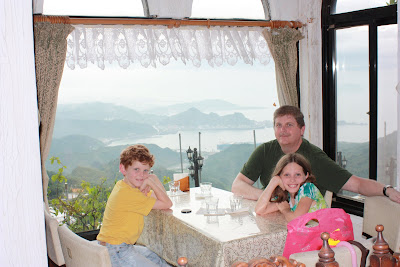 I forgot. Chinese lunches always come with soup. Thankfully, this didn't seem to have anything weird in it. (Like squid!) It seemed to be some sort of vegetable chowder. Eric actually liked it. I tolerated it. I might have liked it except for what I call the "foreign freak-out factor". My body just says no whenever I think too much about what MIGHT be in foreign food. I ate a few bites. It was okay, but my body was threatening to revolt. 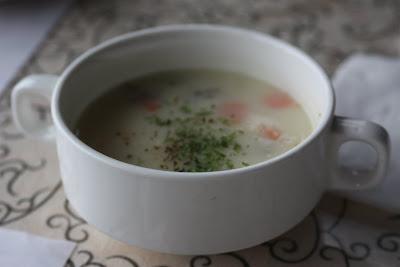 I did manage to eat my beef with scallions. WITH chopsticks. This was my first time using chopsticks. I missed the first time and the piece fell to the floor, but I got better. I'm pretty sure this was actually beef. Pretty sure... 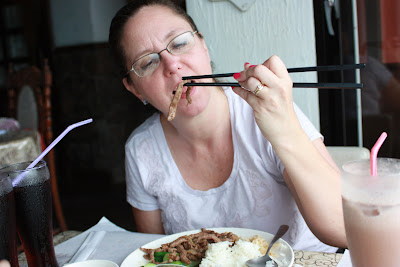 And now, just a couple of random photos taken on the way out of town. 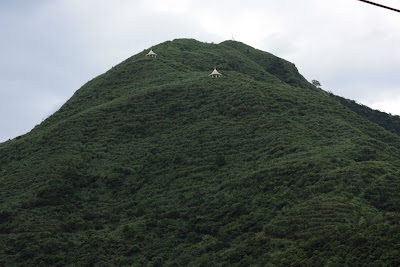 Always there are temples. Temples EVERYWHERE. If you have a keen eye, you can see one at the top of the first picture in this post. This temple, in the midst of a mountain, is the hugest one I have ever seen. This was taken from a long distance away. 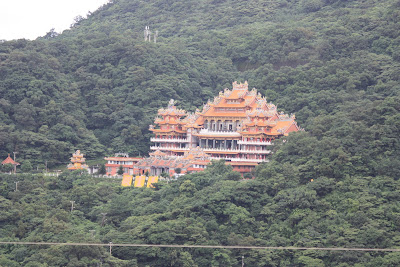 We had a great day, a really great day.
Posted by bristowmom at 8:13 PM

Cool looking town. Those lanterns make me think that it would be really pretty at night.

I love the picture of Eric and the kids, the bright colors in the foreground and the grayish screnery in the back. It really makes them standout in the picture.

I can't wait to see you in your new shoes, what will you wear to go with them?!

Love it! The soup looks wonderful!

Snails on the other hand, look disgusting. I don't care for shrimp because they remind me of worms...

R - I have a mental block about you hating shrimp. In fact, for some reason I always think you love them! So please forgive me if I try to feed them to you in the future. Perhaps you would like the squid? ;-0