24 hours ago I was talking with my Mom. It would be our last conversation on earth. About 11-1/2 hours ago Mom slipped the surly bonds of earth and went to meet her Heavenly Father and her Saviour, Jesus. 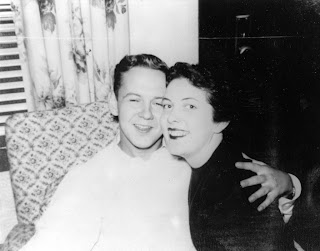 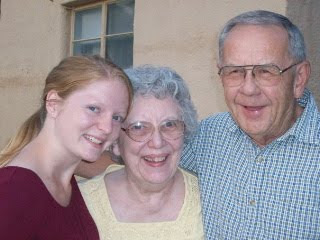 They loved each other a lot. They were very good to each other. They never fought. In recent years they did the crossword puzzle together every morning. They played Scrabble or Cribbage almost every night. They would play one game for weeks on end, keeping track of who was on a winning streak and reporting the details to me. When Mom got ill in April, Dad was lost. He continued to fold the crossword section of the newspaper each day, the way he always had. When I arrived about a week after she went into the hospital, there was a pile of crossword puzzles waiting to be worked. Mom rebounded and they were able to resume the puzzles for awhile. I don't think they ever played Scrabble or Cribbage again. I think Mom was too tired by nighttime. 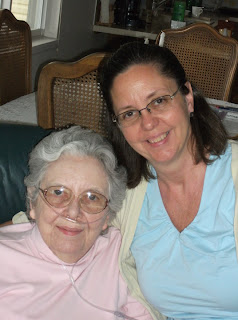 Mom had 2 older sisters. Their mother died when my Mom was 14. Their father when Mom was 17. Mom lived with each sister at various times. The oldest, Velma, is still living. 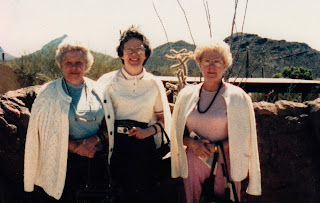 This is my family, about 1975. Everyone laughs at this picture, mostly because of the leisure suits. I don't mind. 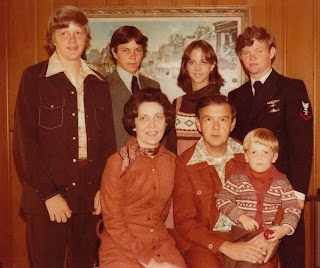 This year I am reading through a devotional book Mom gave me at Christmas, called Selah, Pause and Consider. It was written by a friend of hers, Lois Tupyi. On August 24th the reading was Job chapters 1 and 2, and then the text of the devotional is about being tested. Part of it says:

"One would think that God would shield His most faithful followers from Satan's attacks instead of exposing them. But God knows that as their faith grows so does their ability to endure great trials and persecution. Instead of needing more protection they are fit and ready for the battle, having been trained by the Master Himself... God knew you were ready for the challenge."

Mom was trained by the Master Himself. She had trials in life, and the process of dying was a difficult trial. Mom never complained about any of it. She prayed. Always prayed. She was ready for the challenge.

Now I must be ready for the challenge of living without my Mom. Until April I talked to her all the time. Sometimes daily, but not always. When I had trials I called Mom. I complained. Mom listened. She encouraged. When I was wrong she pointed me to the truth of Gods Word. When I had triumphs I called Mom. She rejoiced with me.

Since April I continued to call and talk as often as I could. Even yesterday Mom asked about our adjustment to life in Taiwan. She asked about the kids and their new school. She asked about Eric and his job. That was Mom - never selfish, never focusing on her challenge but instead caring about and praying for everyone in her life.

May I be just a bit like her.
Posted by bristowmom at 7:55 AM

What an amazing testament to your Mom and your parents’ marriage. How wonderful when God gives us parents who can show us the way and gently remind us when we stray. She has been a blessing to you, and you are a blessing to your family and to us who know and love you. I’m sure your Mom is very proud of the wonderful woman you have become. Relish these special memories of her and her life.

Beautiful. My eyes filled with tears reading this. Your mom was so wonderful and kind when I came to visit you in Idaho. I remember having lunch and the salad with the small pasta rings. I know your heart is breaking but God will give you comfort. cdg

I am so sorry to hear of your loss, I know it's so difficult to miss someone so loved and dear. But the more I study God's word, the more excited I get for others to move on to heaven and be in the presence of Christ. What a wonderous blessing and won't it be amazing-- JUST Amazing to see them again soon!