A Stroll Through JoAnn's Iris Garden

Yesterday Eric left work early in order to take me to lunch and to view some Parade Homes.  (For international readers, every spring and fall the Builder's Association sponsors a "Parade of Homes" in which builders open recently completed homes for the public to tour.)  It turned into an afternoon of pleasant detours, ending with a stroll through JoAnn's Iris Garden.

Many years ago I worked for Joann's partner and learned of her garden.  It is open to the public and she sells the rhizomes.  I visited the garden way back then and at the time they were way out in the country.  Today the most expensive suburb of Boise, Eagle, has grown around their property.  The iris garden is a pretty oasis in the midst of huge suburban homes.

There are 25 iris beds, each planted with many varieties of Iris.  Trying to choose which to buy gets a bit overwhelming!   JoAnn told me she actually has fewer varieties than in the past because customers were so overwhelmed that they left without making a purchase. 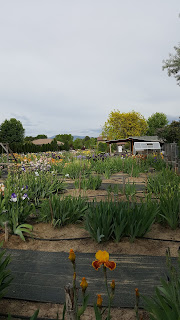 When we purchased our home there were many irises already in place, but I was deeply disappointed with the colors - white and something we call brown.  (The brown is probably some shade of orange. )  Shouldn't irises be purple?  Walking through Joann's garden we saw many colors,  including the dreaded orange, but we needed purple!

We chose 2 varieties,  Eric preferring one and I the other.  (Although now I can't remember who preferred what.) 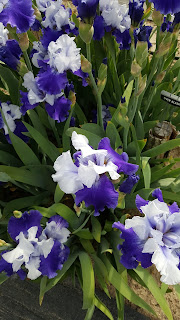 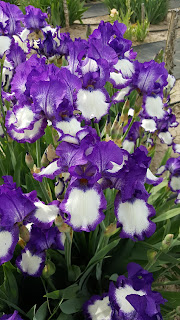 Scattered throughout the Iris beds were lupine, which have never excited me, and around the perimeter of the garden were several clematis.   You probably know how I feel about clematis!  I have seen red clematis twice recently and I believe I "need" one for my garden. 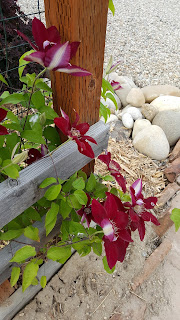 Our day was supposed to end with a stop at a nursery to purchase flowers for my many pots.  However, due to all of our detours, the nursery was closed when we arrived.  That is a good thing, I think, because I will go alone today and my mind will not be overloaded from all of yesterday's beautiful sights.
Posted by bristowmom at 11:19 PM

We used to visit an Iris garden in France, and couldn't believe the variety of colours. I love the clear yellow ones.

just popped back for a browse and realised I haven't 'followed'. I am beginning my letter and was looking for inspiration, the red clamatis is beautiful - I have never seen one that colour.