Fire In the Sky

Back in February we went to a Chinese Lantern Festival. It is an annual event that takes place around the celebration of Chinese New Year. Chinese New Year is different from our New Year. They go by a Lunar calendar and so the "new year" does not begin on the same date every year and it is certainly not January 1st.

A friend talked me into going and I, in turn, talked Eric into it. We did not relish the idea of joining the crowds that we knew would be there, but we decided this was a unique, not-to-be-missed event. The crowds were unbelievable - the worst I have ever experienced. But I guess my feeling about crowds is not universal since my friend and her family thought the crowd was part of the fun. Leaving the venue took at least (at LEAST) 30 minutes. The entire time we were in the middle of a crowd packed so tight that you had to shuffle you feet to move and the people behind you had their hands on your back PUSHING you. Ah yes, what fun!

Anyhow... Here is where we were: 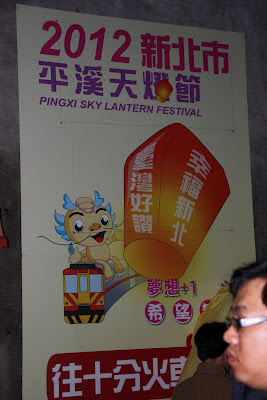 I knew when I left home that I should bring my tripod but I didn't want to hassle with it. Not a bad choice really, because it probably would have been trampled at some point. Nevertheless, the fact that I didn't bring it left me with photos like this: 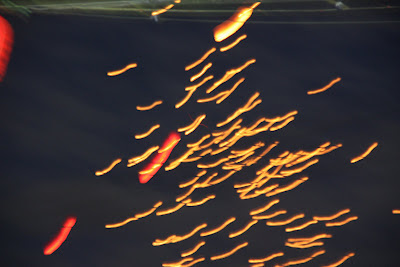 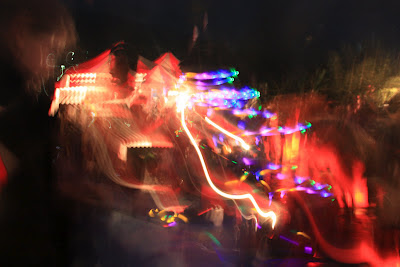 And while I think that last picture is cool in a way, no one would ever look at it and guess I had been to a Chinese Lantern Festival!

As long as I stuck to close targets I did okay. 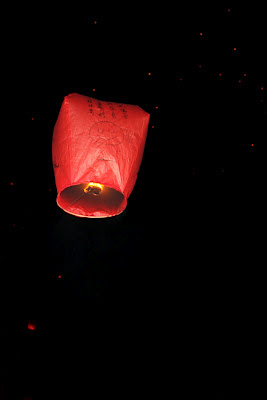 So shall I share a little of the process of the Lantern Festival? Because it isn't just about going and watching lanterns; you actually purchase and send off your own.

First you follow the crowds (as if you have a choice!) to the shop that sells lanterns. 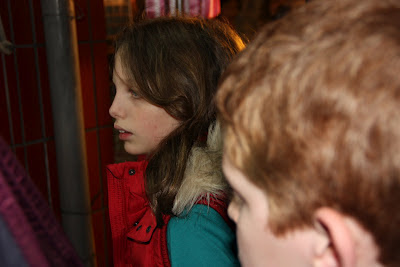 If they don't have the color you want (red, of course!) then you yell at one of the workers (thankfully the kids have learned colors in Mandarin, so they could tell him what they wanted) and then you stand firmly in place while getting jostled back and forth by everyone in the country until someone finally comes out with the color you've been waiting for. 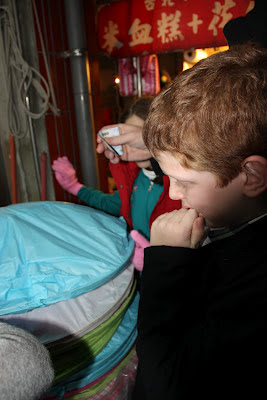 Once you have your lanterns firmly in hand you raise them above your head, pivot in place and work your way against the tide of people toward the area where the fun begins. Oh wait, I forgot, this is part of the fun! 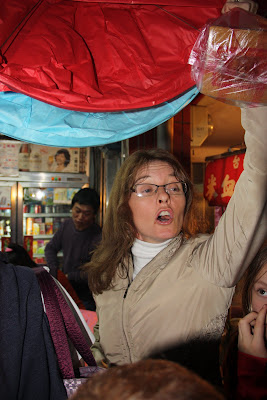 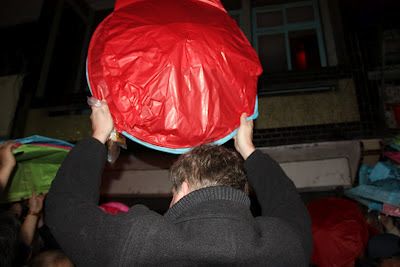 The lanterns must be carried above your head the entire time or they will be crushed by the crowd. I kid you not. 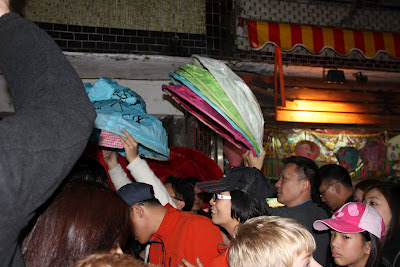 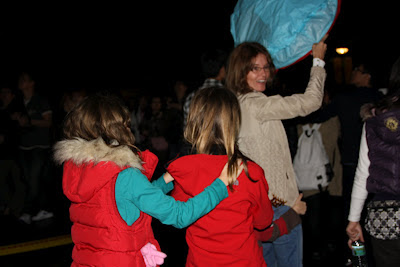 Don't let that last picture fool you. It only LOOKS like there is open space between people. A couple of people must have just fallen dead or something. Ok, I'm kidding a bit, but only a bit. If you look close you can see little arms holding on to the back of my friend - they belong to her son. And my daughter has her arms on her friends shoulders. They were not being funny. If you don't hold on to the people you are with you will be separated forever. Ah yes, we're having fun now!

Now the real insanity begins. Have you ever wondered what makes a Chinese lantern float? Probably not. I hadn't given it 2 seconds of thought prior to this evening. But just in case you want to know, I'll tell you. Fire. You light a fire inside of a PAPER lantern. Perfectly safe. Don't worry. What's the worst thing that can happen with a little fire and 2 billion people packed into 1 square block? 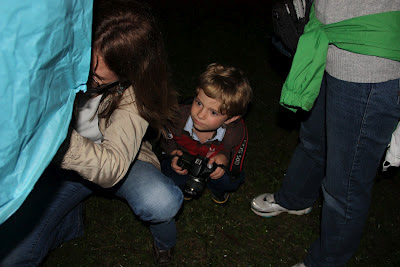 Once the fire is lit you and a few friends hold the lantern in place until it gets good and hot. 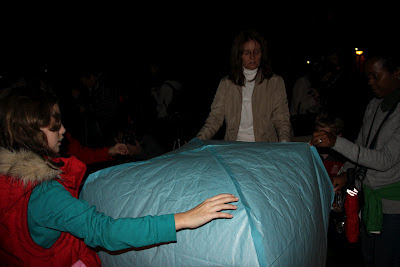 Then you let go and step away and the lantern begins to float up into the air! 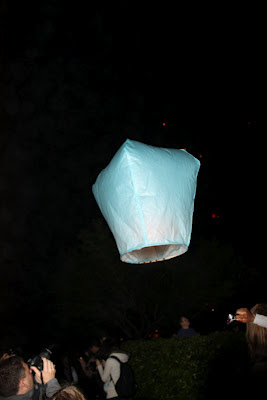 And it really is rather magical.

Did you think I was kidding about the fire? 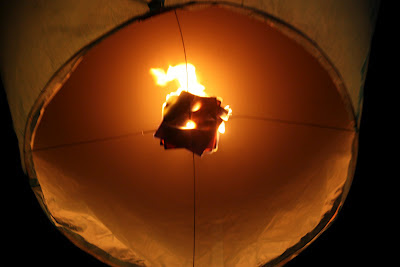 Nope. I wasn't kidding. Fire inside of paper. Crazy if you ask me! 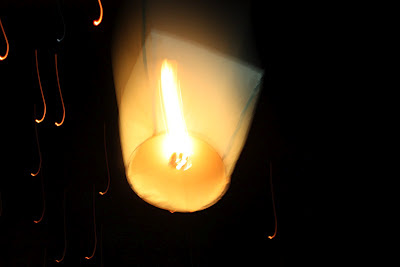 So what do you do next? You repeat the process. 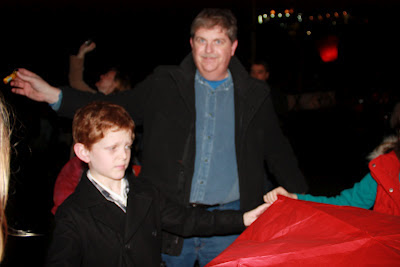 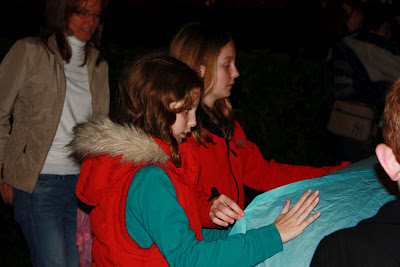 And you try not to think all those crazy thoughts about fire and your innocent little children and what will happen if something explodes or fire comes raining down out of the sky. 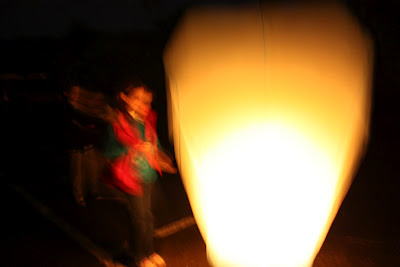 Because as far as I can tell nothing ever explodes or comes raining from the sky.

So if you are someone NOT like me you don't think all those crazy thoughts. You just have fun. 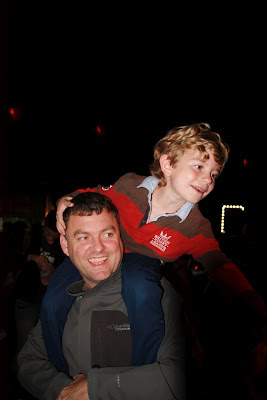 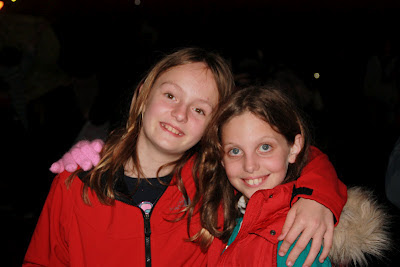 And if you're lucky, you get one sort of good picture of one of the orchestrated send-offs that happens every 30 minutes. THIS... 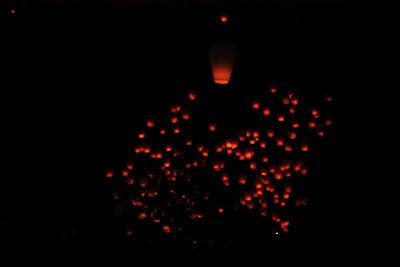 Thankfully I'm moving back to the States so I won't have to do that again next year!
Posted by bristowmom at 12:18 PM

Amazing! I'm sorry you had to endure that, but I love the detailed description and all of the play-by-play photos -- THANKS!

Interesting to experience it with you. I did not realise that the lanterns were so big as I have never seen them close up.

Some people are starting to send lanterns into the sky when celebrating here and there is cause for concern about resulting fires.

Barbara, it is sometimes funny, sometimes alarming the way people here don't worry about accidents. In some ways it is refreshing. The U.S. Is so over-regulated that it is sometimes nice to just be able to do what you want. Although, I must say, Taiwan seems to be the polar opposite of America as far as regulations. Sometimes I think they ought to have a few for safety's sake. I should and could do a whole post about the differences.

Wonderful sight to see them in the sky, but as Barbara said, there is a concern here that accidents happen when they drift down into fields.