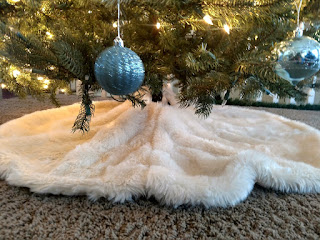 This year, for the first time in my life, there are no presents under my Christmas tree.

I admit, that sounds more dramatic than the actual facts.  Allow me to explain, beginning with a bit of family history.

Both of my parents grew up with alcoholic fathers. Due to their drinking, neither of my grandfathers could hold a job so both families were quite poor.  I don't recall my father telling me any stories about Christmas as a child, but my mother told me a story that broke my heart.

One Christmas when my mother was a little girl she was hoping for a new doll for Christmas.  I imagine she may have hoped for other surprises as well. When she approached the tree that Christmas morning there was indeed a doll under it; however, it was the doll she already owned.  The doll was lying under a new doll blanket, probably hand made by her mother.  That blanket was my mother's one and only Christmas present that year, which is not actually the worst part of the story.  You see, my mother had two much-older sisters who were married; one sister had a daughter just two or three years younger than my mother.  A short time after my mother discovered her meager Christmas gift, her sister, brother-in-law and niece arrived bringing with them the niece's Christmas gifts.  I don't know what all of the gifts were, but I know it was plural - giftS, and I know one of those gifts was a puppy.  My mother was of course an adult when she told me this story and in many ways I'm fairly certain she had moved on from the sadness of her childhood.  Nevertheless, the fact that the story left me with such sadness makes me believe the sadness was still under the surface somewhere and I picked up on it.

Fast forward quite a lot of years.  My husband also grew up with an alcoholic father who couldn't keep a job. The poverty he grew up in is unfathomable to me.  I'm sure all of their Christmases were meager, but the story of his that most sticks in my brain is that of one of his birthdays.  Like my mother's sad Christmas, my husband received just one gift: a pack of gum.

I tell these stories because I believe they help me understand something of a struggle I have had.  I did NOT grow up in poverty and I did not have meager Christmases.  On the contrary, I have memories of ever expanding piles of presents under the Christmas trees of my childhood.  We were not rich and I did not get every single thing I ever wanted, but I got plenty.  More than plenty, honestly.

But these stories; these stories broke my heart for people I love.  I didn't know for many years that my approach to Christmas presents was a reaction to the emotion of these stories, but I have discovered that I spent much time and effort trying to make up for past hurts suffered by people I love.  It became crucial to me that each and every person to whom I gave a gift would be thrilled with the present.  Some times my efforts were a resounding success and that gave me great satisfaction.  Of course, it was not possible to achieve perfect success every time but it seemed that at least people knew I tried to give wonderful gifts and that was enough for me.

Fast forward again, not too many years this time, to my children. The Christmases my children have experienced, well, let's just say they were nothing like those of my parents.  One other historical detail here will help to explain why my children's Christmases were what they were:  my husband, in reaction to his childhood, readily admits he wanted his kids to have EVERYTHING.  He did not want them to long for things the way he had.  So, yes, we over did Christmas.  A LOT.  And sadly we learned that children who are given much do not appreciate it.  It's not their fault, they don't understand anything of economics or their parent's emotions or that there are kids who get nothing for Christmas.  It's our fault.  We understand that.  But how do you change your children's expectations when you've nurtured their greed, and when you yourself are trying to make up for the hurts of others by giving the best gifts always?

Unbeknownst to me, through all my years of trying to give the best gifts, I was setting myself up for a huge emotional tumble.  The tumble came last year.  It was the worst Christmas of my life, the nightmare I had long feared.

I don't remember what gifts were had for our kids, but I know I was still trying with everything in me to make my kids happy.  Not just happy, I wanted them ecstatic.  I wanted a reaction like the year we gave our daughter her first cell phone.  She squealed and screamed and jumped for joy.  She hadn't expected it.  She was THRILLED.  Boy, that was a banner year for me.

No, I don't remember what last years gifts were, but I will never forget that they were not enough.  Unbelievably, my son came into my room after gifts had been opened on Christmas Eve.  (My family tradition has always been family gifts are exchanged Christmas Eve and more gifts are received from Santa on Christmas morning.  Even after the kids were old enough to know there is no Santa, we continued with the double dose of presents.) My son came to COMPLAIN about his gifts.  The details escape me.  I do know that I believed he would be happier once he saw the rest of his gifts on Christmas morning, although I don't think he actually was. Mostly I remember the crushing emotion of the entire debacle.  I had TRIED and failed to satisfy my son's greed, the greed that had been planted and nourished over the years by my misguided, misinformed choices.  My failure seemed to have replicated for my son the experiences of my mother all those Christmases ago, the deep disappointment in not receiving material gifts they had been longing for.  I was in agony but I was also angry because my son had not gone WITHOUT as my mother had, he instead had become so spoiled that nothing was ever good enough.

I can tell you I was in tears last Christmas.  I felt like I could not breath.  I was crushed by my failure. I realized that I had set an impossible standard for myself, but I doubt my reaction was the healthiest, best choice.  I decided on Christmas Eve 2016 that I would not buy presents this year.  I would not set myself up for that crushing disappointment again. I have stuck by that decision and my husband agreed to go along with my plan.

We told the kids of our decision some time ago.  It's not as draconian as it sounds; it's not that our kids are getting NOTHING.  We are giving them cash rather than gifts.  Not draconian enough, apparently, because as Christmas approaches I find that I am filled with dread:  what if they still think what we give them is not ENOUGH?

Christmas is not supposed to be about gifts, I know this.  Yet I love gifts.  I LOVE gifts.  I love receiving gifts and I love giving good gifts.  And I'm 6 days away from a gift-less Christmas.

I realize that through this post it sounded like it would end with a wonderful lesson learned and happy anticipation of a more meaningful Christmas.  I wish that was the case.  It's not.  But I think there is progress.  I am aware of my mistakes, I am aware at least somewhat of my motivation.  I guess I'm hoping that we all survive this Christmas and afterward have a healthy discussion of how we should actually be approaching the whole thing.  Maybe next year I'll have a neat and tidy answer.  But for this year, there will be no presents under the tree.
Posted by bristowmom at 12:32 PM

What a hard emotional time for you. I feel that children today are so besieged with media advertising, being told they NEED this and that, comparing the latest gadget with friends....
But acceptance of reality is hard and it is a lesson that children will have to learn as the world gets poorer.
I'm sad for you that your own Christmas has been so flattened by other peoples expectations.

Your posts have not been in my reader ..i wondered why you had been absent in blogland! I just read your post today, i will write to you about it. We gave our boys cash for some years, it worked, they learned the value of money, enjoyed sharing with us the shopping experience in the January sales, looked forward to choosing their gifts, it is a good,plan. This year my youngest age 19 said let's not do presents or money at all, so we went with it and just enjoyed the day and each other's company. I know well,that feeling of trying to meet the standard you yourself have set, we are so hard on ourselves! You are a good mum and your kids will look back on this and Love you the more for it I am sure. Blessings for 2018 x

wondered how it went? hope you won't beat yourself up too much for just trying to be a good mum. We used to give our boys money and encourage them to shop in the sales, it took all that nasty pressure off and they were very happy with this.

I appreciate you sharing your heart with us. It is hard, I find, as well, to find the balance of giving and giving too much! On Christmas morning, we do have lots of presents, but our first focus is on the Christ Child and the Christmas Story. It is understood, even of the smallest child, that the story will be read first, before any gift is opened, for Jesus is the first gift of Christmas. But, after... Gift after Gift is opened, I completely understand how it is hard to feel satisfied with earthly things. We also give gifts that give to others. One year, my sister gave me a hairbrush,but it was much more than that, it meant that someone who had very little, would be given a hairbrush, too, and a grooming set. I broke into tears. It was, in spite of all the lovely gifts I had been given, my favorite that year.

God's Blessings to you, Net