Before we were married I began stitching a Christmas stocking for Eric.  We were married 4 years before Anna was born and some time after her birth I stitched her stocking.  Two years after Anna was born we welcomed Ethan and I began a stocking for him.  I actually misplaced that stocking so I purchased another shortly before some Christmas  - probably his 3rd.  His is the most detailed of the family and I quickly realized I was not going to be able to complete it before Christmas.  In fact, I did not complete it for several years!  (I habitually pick Christmas stitching up a few months before the holidays only to abandon it a few days prior to Christmas when I realize I can't possibly finish.)

Once I had finally finished Ethan's stocking, I began to work on mine.  I finished the stitching a few weeks ago but hadn't bothered with assembling it until last night  - when Anna told me peanut cakes (our favorite Christmas treat) could wait but I  MUST finish my stocking.  So off I went to my craft room.

In the course of years and multiple moves I had lost the felt which was meant to be the back of my stocking.  (I did, however,  find Ethan's original stocking!) As I rummaged through my craft room searching for the felt, I found something better and inspiration struck.  Actually I found 2 items: a child size pillowcase that had been my Dad's and my favorite fabric purchased in Taiwan.

The pillowcase was cream with a hand crocheted edge.  I feel rather certain that my grandmother made the case.  If not her, then likely her mother.  I had actually used it on a small pillow for my children when they were little,  so that pillowcase held multiple levels of sentimentality for me.  Over the years though, age was catching up with it and the seam was fraying, rendering it useless as a pillowcase.  It struck me that the crocheted trim would be lovely at the top of my stocking! And since I was going to cut it apart I decided to use the body of the case as the lining for the stocking.  I love these moments of brilliance - they are so painfully rare.

What to do about the back of the stocking?  I have a box of beautiful fabrics I purchased in Taiwan and Vietnam, including many BEAUTIFUL silks.  My favorite fabric though has always been the bright floral Hakka pattern.   The Hakka are the indigenous people of Taiwan. Based on the exuberance of their signature fabric I'm certain they're my kind of people!   I purchased the fabric in 3 colors: red, purple and blue.   I chose the  blue for my stocking, and the reason prompts me to share another detail of the piece.

The kit for my stocking was purchased eons ago.  It has made many moves with me, likely including the move to Taiwan.   As I was feverishly working on it last year, I realized that as you peek into the windows of the house it's walls are aqua or turquoise colored.  The funny thing is the walls in the dining room of my current home - which you see through one of my front windows - are turquoise! That knowledge prompted me to use turquoise thread for my name, though the pattern stated it should be green.  The pattern also included an alphabet in block letters, similar to those for the rest of the family.   I decided to go off script so I looked online for something more my style.

Since I had focused on turquoise for my name, I decided the blue (turquoise-ish blue) would be a great choice for the back.  I am incredibly pleased with the finished product.   The only problem is that now I feel like the other stockings are a bit boring! 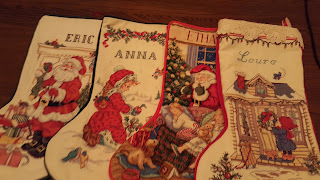 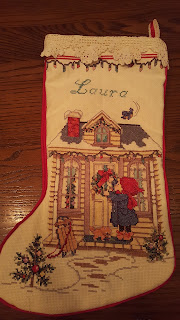 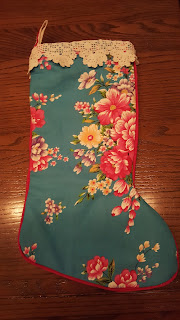 And now please excuse me, I need to get back to making peanut cakes.

I love the way that yours reflects you uniquely.

Could you let me have your address please, and I will send you a little piece of fabric!