Places in Vietnam: Hoi An

Without question, if we had continued living in Asia I would have taken the family to Vietnam. It was nothing like what I expected. My trip was a whirlwind, lasting just a few days, so I know I saw only a few highlights. It would be fascinating to spend more time and see more of the country. However, from what I did see, Hoi An was the most unforgettable. It is a lovely old colonial town. Sadly, not much of this style survived the war.

Hoi An is a Unesco World Heritage site, and this is part of what their website says about the town:


The town is a special example of a traditional trading port in South-East Asia which has been completely and assiduously preserved: it is the only town in Viet Nam that has survived intact in this way. Most of the buildings are in the traditional architectural style of the 19th and 20th centuries. They are aligned along narrow lanes of traditional type. They include many religious buildings, such as pagodas, temples, meeting houses, etc., which relate to the development of a port community. The traditional lifestyle, religion, customs and cooking have been preserved and many festivals still take place annually.
The people were generally very friendly.  I noticed one thing which I found interesting:  There were a lot of locals who seemed to be just hanging around in various parts of every street.  I cannot be certain, but I do not think they were just passing time.  I suspect they were actually the primary means of communication between shopkeepers, a sort of primitive internet if you will.  I had two experiences which caused me to draw this conclusion:

1) I was in the first shop of my day looking at lovely silk fabrics and asking prices.  Because it was the first shop I didn't want to buy anything until I had an idea if their pricing was fair.  I left and walked a short distance to a second fabric shop.  When I entered the shopkeeper was not on any telephone or computer.  Before too long I asked the price of a fabric and was told something like "You were just in the other shop, the price is the same."  How did she know where I had been?  Somehow that had been communicated to her and I think the information came by runners.

2) I was looking for a very particular souvenir for my son which I finally found in one shop.  The shopkeeper here (the only unfriendly person I encountered in Vietnam) gave me an exorbitant price when I asked and he was absolutely not willing to negotiate.  Shortly thereafter I met my friends for lunch and told of my frustration over the situation.  One friend, our defacto leader who is an amazing negotiator, was convinced she could get him to bring his price down so she went to have a crack at it.  She also met a stone wall.  It is, of course, possible that this man was just grumpy, but I think someone watched me go to the restaurant and reported to him that I was sending reinforcements.

I'm not sure of that, it was just the feeling I had, but I found it an interesting possibility. 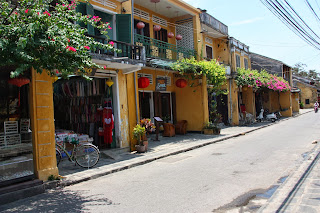 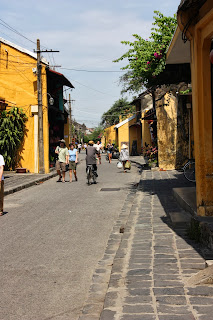 The exuberant colors of the chinese lanterns appealed to my love of color.

At our hotel there were lanterns hanging in the trees.  There were lit at night, which was beautiful.  I'm afraid that without a tripod I could not capture the night time scene. 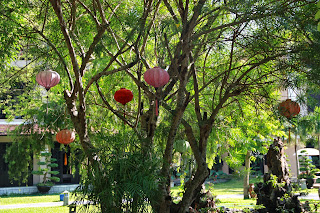 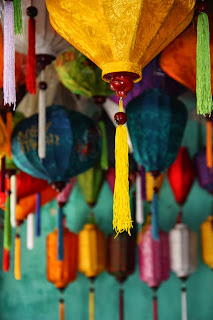 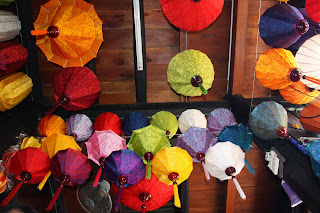 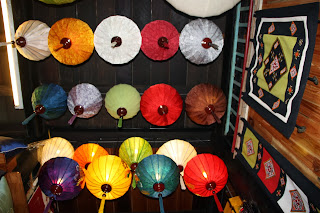 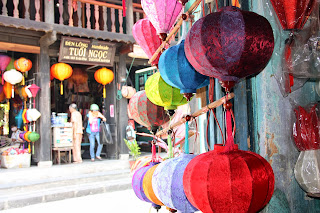 One side of the famous Japanese bridge.  It's a very old wooden structure which crosses the narrow canal. 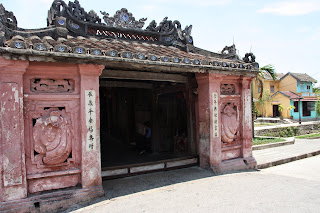 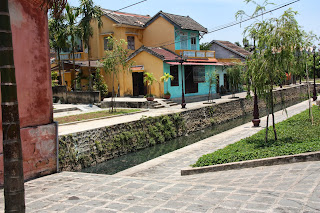 Most likely a temple.  (I am judging based on the decoration on the roof which is similar to that found on Taiwanese temples.) 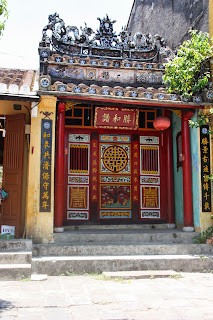 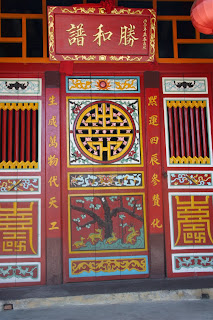 What appeared to be dishes used as decor at the top of the temple: 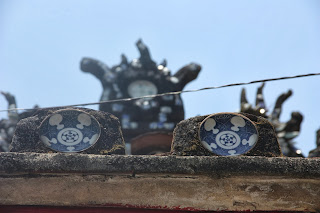 Of course I had to photograph some of the flowers! 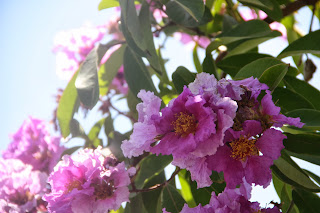 The main bridge spanning the river which runs through town. 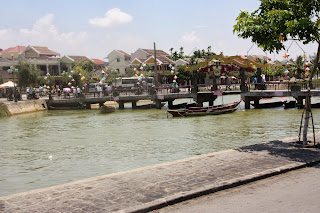 I'm embarrassed to admit I have no idea what this actually is.  My guess is something to do with fishing, but I was walking alone and had no one to ask. 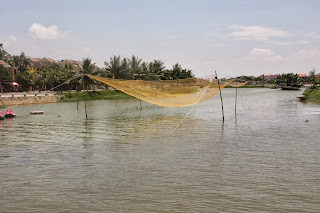 Pictures from on and around the bridge: 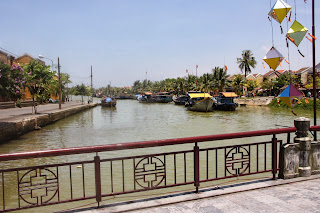 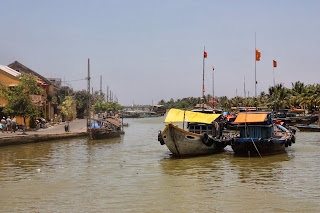 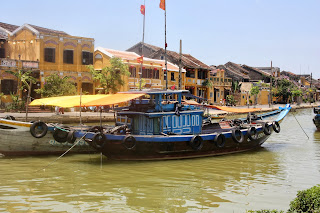 That round thing is actually a fishing boat!  I have no idea how you control it. 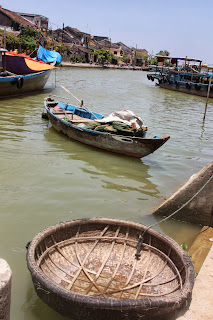 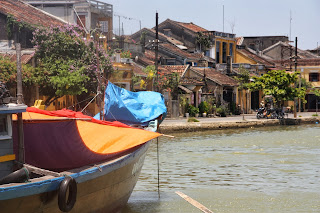 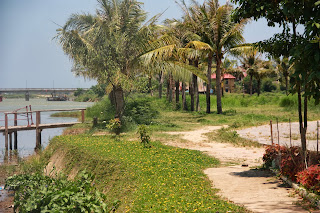 Passing by a bar during the afternoon, I thought the sheer purple curtains were lovely.  I am sure the light cast through these at night would be beautiful. 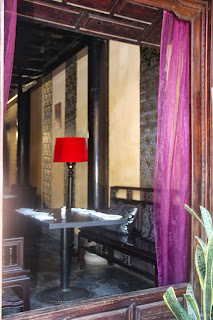 At the entrance to a restaurant, a rack on which to hang your scooter helmets. 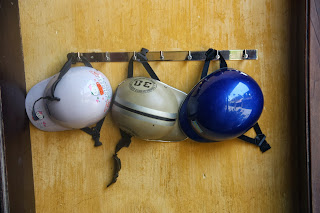 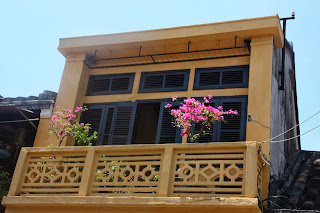 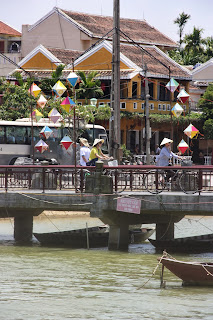 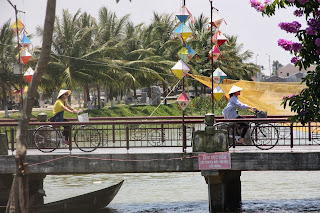 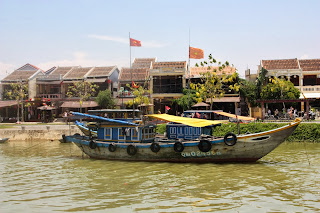 It was quite hot and humid in Vietnam.  This fisherman was apparently taking a break out of the sun. 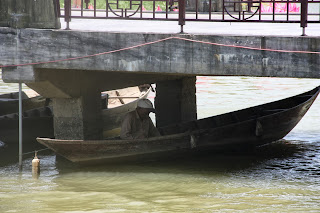 I apologize that my narrative is lacking.  Hopefully you find the pictures enjoyable.
Posted by bristowmom at 3:51 AM

Your pictures are fascinating. The colour and life is beautiful. And the flowers....!

Fantastic photography, you, and as Julia Child says, never apologise! You're wonderful and we appreciate the armchair travel opportunity.

Lovely pictures - we walked some of the same streets! the ones with the bouganvillia - I love that plant - it won't grow well in the UK although some garden centres selling it here. I took some pics of the Japanese bridge but couldn't find them for my post! it was pretty and the little temple inside was a strange place. I would, like you, love to go back some day.