Forrest had a Bad Day

I took Forrest to the vet yesterday because he had developed a swelling on his face. The short story is an abscess formed around a piece of cheet grass which the vet can only guess he ate. They lanced it and sent him home with an open wound. (Not something I do well with, but this story is about Forrest.) I've had to put the cone of shame onto him to prevent his scratching the open wound. To put it mildly, Forrest does not like the cone of shame. Look at this: 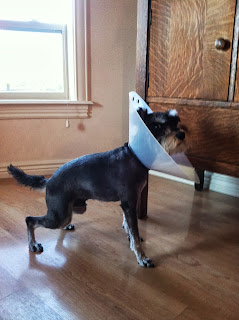 This is not a picture wherein I captured him in motion. No, when you put a cone on Forrest he freezes in place and will not move. He won't eat or drink or lay down. Honestly, he won't move a muscle! Poor Forrest, he had a bad day. And he's likely to have a few more while we wait for his wound to heal.
Posted by bristowmom at 11:21 PM

Poor old thing, it must feel so strange!