Because it's been 2 months since we've been to Bali I have decided to do one final post with some of my favorite pictures all thrown together.

This picture reminds me of something that would appear in National Geographic. Never mind that the monkey was in a zoo. Just pretend you don't know that, and the picture will seem awesome. 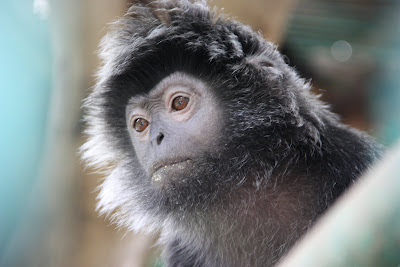 Ethan hates this next picture and wanted me to delete it but I refused. It is one of my favorite pictures ever of him, because it captures one of the funny faces he makes. 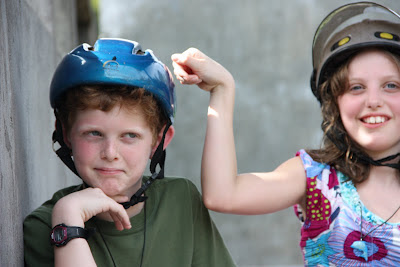 Of course no list of my favorite photos would be complete without a flower picture or two! (Usually 10 or 20, but I think today there is only one.) 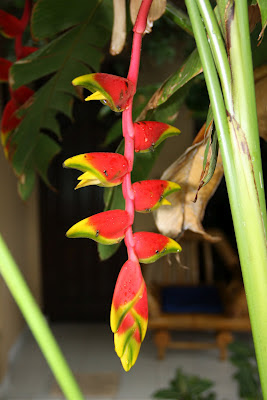 This next set of pictures was originally slated to have it's own blog post. It would have been titled either "I Love a Parade" or "A Happy Accident". One day as we were trying to get someplace in a car we hit a traffic jam. Everything stopped. Completely. Turns out the local villagers were on their way to the temple for a big ceremony. There were drums and lots of people carrying offerings in baskets on their heads. Fun to see. 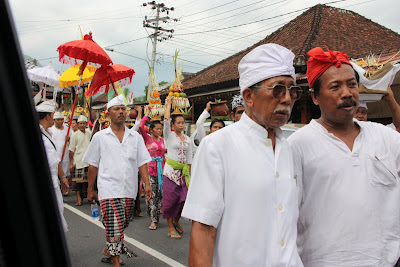 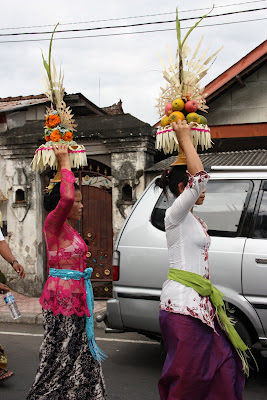 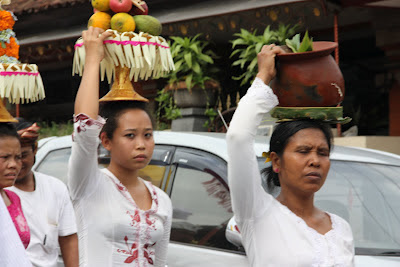 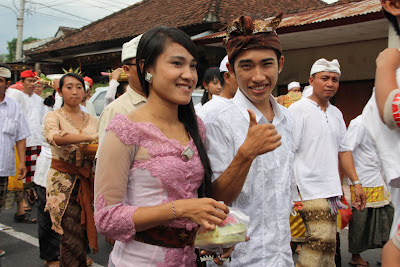 Okay, maybe I have 2 favorite photos of flowers. I guess I didn't count this one, since it's not JUST a flower. It is a path with a beautiful flowering bush. I couldn't resist. 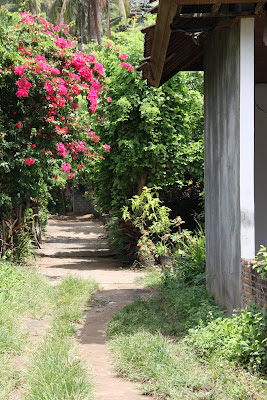 When I took the flower bush picture I was wandering about on my own, the rest of the family having gone on another little adventure. If this had been a blog post it would have been titled "Most Fun I Didn't Have". Eric, having been a submariner in the Navy, couldn't resist the chance to take the kids on a submarine ride. I had done this long ago on another island, so I passed. (It's an okay experience, just not fantastic enough for me to need to do it twice.) 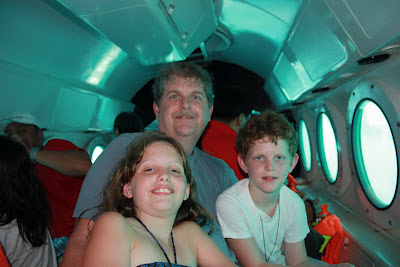 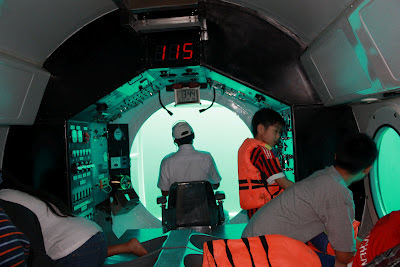 As I was passing a large house (with it's own 2nd floor temple) this little boy spotted me: 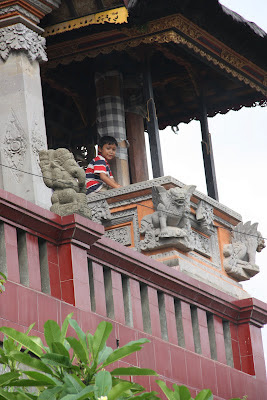 And probably because I had a camera he called to all his playmates to come have a look. (There were more children then you see here. They were popping up and down so I couldn't get a picture of all of them.) 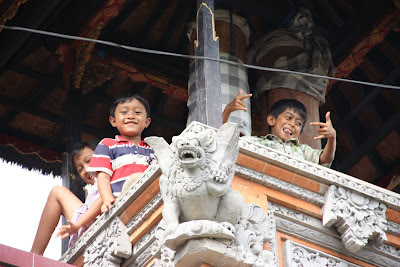 The post for these photos would be called something like "Bali: In Living Color". I cannot resist the local markets, even though I never buy anything. They are bursting with colors and strange-looking foods. 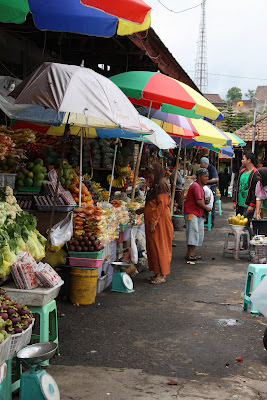 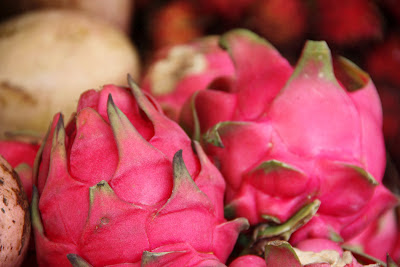 Thankfully I had my camera trained on this woman before she turned toward me, because she didn't look happy about being photographed. I guess I broke my rule of never photographing people without their permission. I had actually wanted a picture of the back of her head, because the headpiece she was wearing was made of beautiful lace. Somehow I didn't think she would agree, so I just moved on. 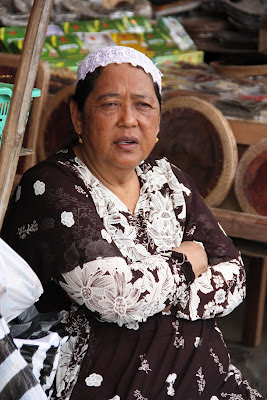 See the spiky thing at the bottom left? If you've never been to this side of the world my guess is you don't know what it is. If you have it is something you will never forget. It is called Durian. It is a hugely popular and somewhat controversial fruit. The smell will knock you over. Seriously! The buses in Taiwan (and I think the MRT stations, although I cannot remember for sure) have signs saying you are prohibited from bringing Durian aboard. It is that bad. 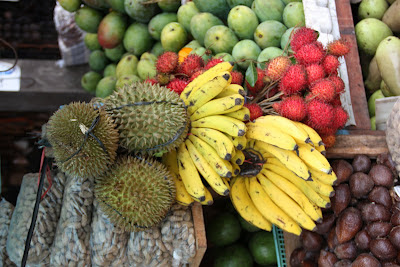 The market has bags of fresh spices. This must be heaven if you love to cook. 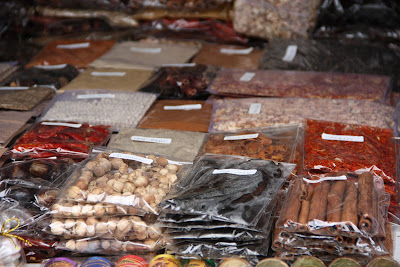 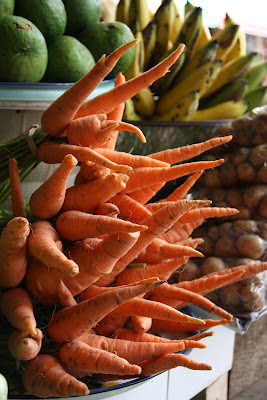 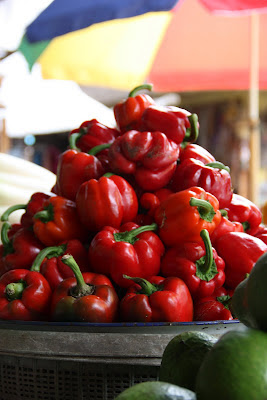 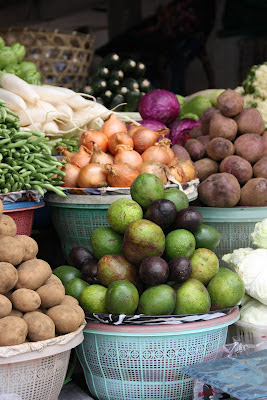 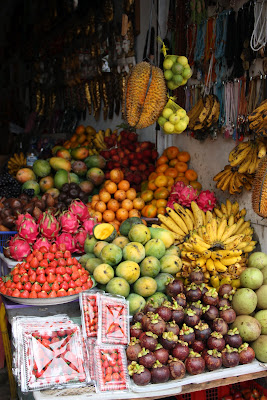 I do not know the name of this next fruit. It is one of the few things I agreed to try. It was actually quite good! You break open the outer skin (it breaks easily into 2 pieces). Inside there is a whitish fruit with a large pit in the middle. I don't plop things with pits into my mouth because I have a thing against spitting, so I just nibbled around the pit. It was exceedingly sweet which, of course, pretty much guaranteed I would like it! 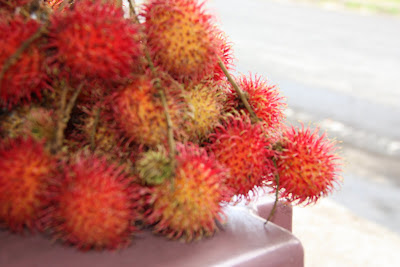 Finally, we took a little side-trip to Git-Git Falls. You must pay to walk along the path to the falls. 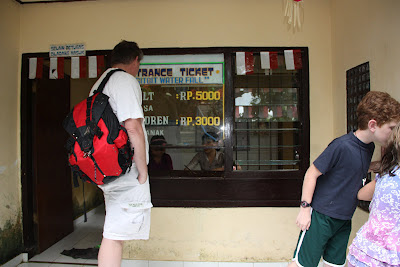 The walk itself was full of interesting sights. I took this photo of a rooster, and wished I had been photographing more of the birds. They are everywhere in Bali and they come in such an array of colors and patterns. Before this trip I had no idea roosters were such a varied, colorful species. 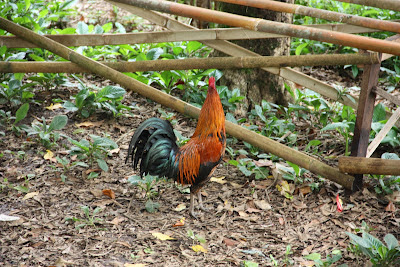 A restaurant along the path. As with most places in Bali, it does not have walls. 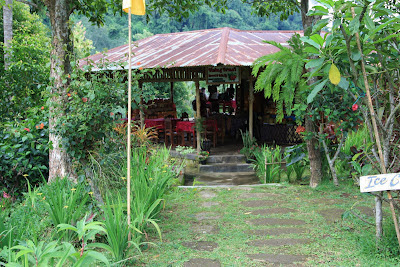 The path led through the ubiquitous rice paddies which, I think, are always beautiful. 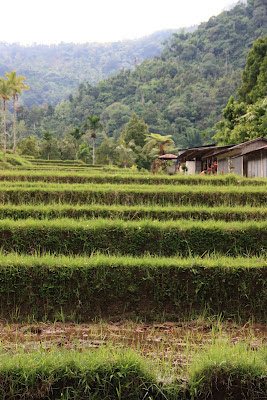 Bali has learned to capitalize on tourists. Along the serene path are huts full of vendors selling all manner of trinkets. Yes, we bought some things. How could we not? We had children with us after all. And actually, some friends had requested we bring back a specific item for them which we found here! 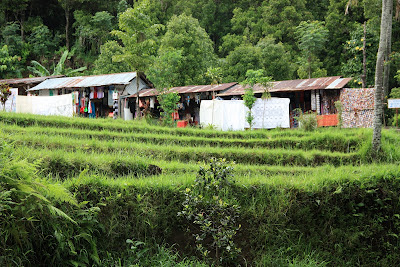 Finally we came to the waterfall. 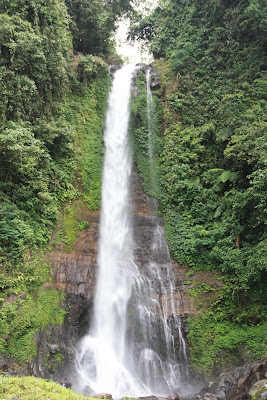 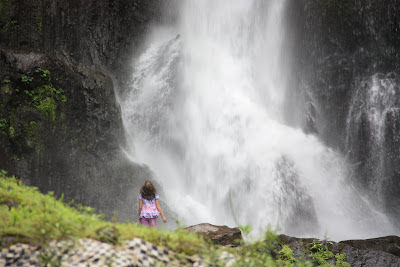 In a few days I may have some surprise news. Be sure to check back!
Posted by bristowmom at 8:50 AM

I love your vegetable photos.-msw

Thanks! I am hoping when I get back to the States to see if I can get them printed at a photo shop - LARGE. I think they would make fun artwork.

Hi!
The fruit is called Rambutan.