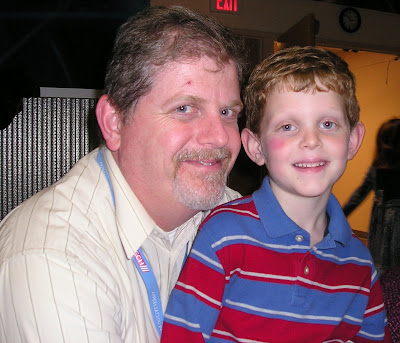 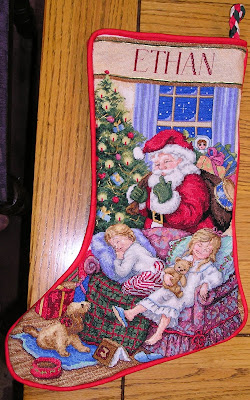 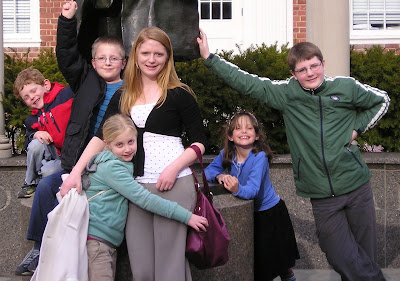 I am just posting a few unrelated photos today, in order to update various family members. The first was intended to show Ethan's first (possible) black eye. I'm not sure it is going to turn into a black eye. It looked blue under his eye earlier today but tonight I mostly just see the red cheek, so he may yet escape the whole black eye thing. He and the neighbor boys got a bit too wild today and apparently Ethan was pushed into the edge of a table. Thankfully I wasn't home at the time. If I had been here I'm sure he would have cried himself to sleep but instead his beloved cousin took him outside for a rousing game of cap guns and he quickly forgot his misery.
I just realized that distant family members are likely surprised by the photo of Eric as well - since he has somewhat recently grown a bit of a beard. He was quite unhappy when it came in entirely gray, but I am secretly amused by it. I think I like it and he thinks he does, so we think it is staying.
The second picture is, yes, from Christmas. I am ridiculously proud of the fact that I FINALLY finished Ethan's Christmas stocking. I was hoping for a better picture but this is the best I have. The detail on this stocking was unbelievable and I wanted to be able to show it so I would have an excuse for taking 3 years to finish it. Since it doesn't show up well you'll just have to take my word for it.
The third picture is meant to reassure my SIL that her beautiful daughter is alive and well, and also for my parents to see many of the grand kids that they rarely get to see. My niece has been visiting since last Monday. She is planning to go home on Thursday, although we are contemplating methods of inducement to get her to stay. How we would all LOVE for her to stay. Alas, I am sure her parents would not be pleased if we kept her, so we will have to give her back later this week. This picture was taken in Annapolis, but I decided to focus on the kids rather than any scenery because I specifically wanted a photo for the above-stated reasons.
Gotta run...
Posted by bristowmom at 9:16 AM