We've had Forrest, a miniature Schnauzer, for 3-1/2 years.  He is the perfect dog for us.  Some time ago I began to think a second dog would be fun so from time to time I looked at our local animal shelter.  One month ago we found an adorable little guy who we thought would be a wonderful addition to our family.  We brought him home and named him Pluto and we all sort of fell in love.  Crazy.

Two weeks later I was at a friend's house when I received a call from a nurse regarding my Dad.  "...blah, blah, blah, might be cancer...".  I hung up and within moments the phone rang again.  It was my Mother-in-law calling from the emergency room where she seemed to be having a heart attack.  Two days later she was having open-heart surgery and plans were being made for her to recuperate at our home.  Currently she and her best friend are staying here.  And I've accompanied my Dad to the doctor and my brother took him to the hospital for a biopsy and next week we 3 will see the doctor again for results.  Meanwhile,  I was trying to housebreak Pluto.  Busy.

It became clear I couldn't do all of these things simultaneously,  and so the puppy, dear sweet Pluto, had to be returned.   Hard.

The day we went to meet Pluto I felt a prompting to pray but I ignored it.  The day I returned him I wondered in anguish how I had messed things up so badly and a small voice told me I should have prayed.  God knew about the crazy that was coming my way and if I would have "waited on the Lord" before making a decision my family could have been spared this sadness.  Sad.

I miss Pluto.  I doubt my kids would ever believe me, but I'm pretty sure I miss him more than they do. 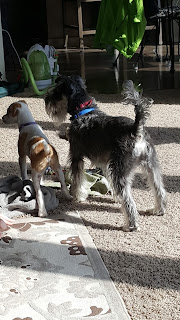 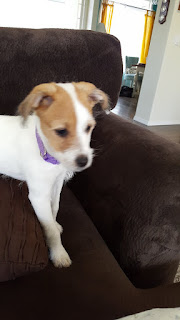 Posted by bristowmom at 1:32 PM

You have been going through some sad times lately. I'm sorry to hear about the illnesses that have struck your Dad and mother in law. Such a shame about the little dog, but there will maybe a time in the future when another one will be right.

You have held up admirably under a great deal of stress. You have only mentioned some of the factors... We are proud of you at this end. I am sorry about Pluto.