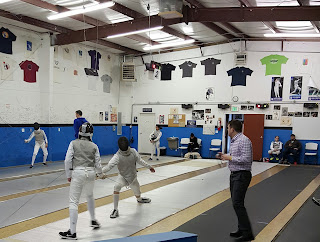 Ethan has long had a fascination with swords and sword-like implements.  From wrapping paper rolls to plastic light sabres to daggers and samurai swords, if he can swing it he loves it.  So 3 years ago, when we were set to arrive in Boise at the beginning of summer, I was happy to find a fencing class to help fill the long days.

Sometime last year the man who taught that summer class started the first fencing club in Boise.  Ethan was one of the first students which was nice because for a time he basically received one-on-one lessons.

Ethan is now at the point of attending competitions and this past weekend the entire family travelled to a competition in another state.  The competition did not go well for Ethan. I believe he decided early on that he could not win therefore he didn't.

The experience woke me up.  My parenting style seems to be opposite of most these days.  I would say I take a hands-off, sink-or-swim approach to everything including fencing.  I am the driver and the check writer.   Beyond that I thought I could be Ethan's head cheerleader, but this weekend showed me that I need to be more.  I know nothing of the rules of fencing therefore I am incapable of offering any advice.

Eric and I struggled with the fact that Ethan's coach was not present.  It meant Ethan was on his own out on the fencing strip while his opponents had coaches encouraging and instructing. Ethan is smart and strong and I believe fencing is the perfect sport for him, but he is also driven which results in him not being okay with anything less than 100%, first place, the best.  I could not convince him that there was great value in the experience,  that it's not about winning. At the end of the competition we were all frustrated and crabby.  I badly wished his coach was there to help, but I realized that I am going to have to step up and learn some things because I don't know how often a coach will be around.  So today I begin the process of educating myself in the sport of fencing.

My comment was too long so I'm writing you an email.

My poor kids. I knew nothing about any of their extra-curricular activities. I just drove and showed up. Maybe youtube would be the most painless route.

Very poor that the coach wasn't there. My grandson fenced for some years and entered competitions all over England. He enjoyed it but as he is now 23 and working , he doesn't have time any more.