Adventures in Camping without a Man

Eric is away on business again so the kids and I ventured out on our own this week.  We went just a few hours north to Stanley Lake, Idaho.

Idaho is a much maligned state, which is easy to understand if you drive through on it's only freeway.  Interstate 84 stays in southern Idaho which is practically nothing but sagebrush and sand.  (Interestingly, despite the fact that my iPad auto corrects and auto capitalizes, it never auto capitalizes Idaho.  Apparently programmers don't even know Idaho is a proper noun!)   However, if you travel just a little bit north in Idaho you will find some of the most spectacular scenery in the U.S.

This is where we camped, on Stanley Lake with McGown peak as a backdrop. 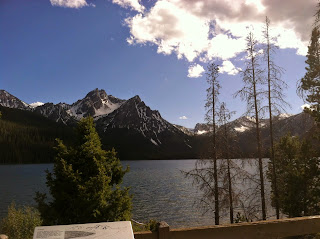 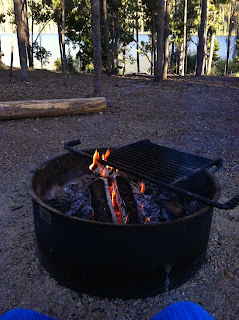 A funny thing happened while we were camping. We had been at our campsite just a few hours, had roasted the obligatory hot dogs and then marshmallows and I was washing dishes while the kids played outside. Suddenly I heard a strange hissing sound coming from the engine compartment. I rushed out. The kids were looking frightened and there was steam coming from under the hood. I grabbed the fire extinguisher and the dog out of the RV and told the kids to run get the camp host. But within a minute or so the hissing and steaming stopped. I stood for a few minutes, completely befuddled. Turns out the host was gone and there seemed to be no one else around who could help me. I was at a loss to know what had just happened. The engine had been off for at least 3 hours so I couldn't imagine what happened. I did what I always do when I have a problem - I sent a text to Eric. In Singapore. Silly! But he responded and through multiple texts we tried to figure out what had just happened. His conclusion was a hose from the air conditioner must have broken. I settled down and prepared to enjoy the great outdoors.

The next morning, Ethan handed me a piece of paper and bolted out the door. The paper was folded twice and he had written "urgent" on the front. I unfolded it to find Ethan's mea culpa and a plea that I not kill him! Turns out the kids had been sword fighting with the roasting sticks and his stick had flown off the handle (literally!) and, as he put it, "into the RV." There was time separation here, so I thought he meant it had gone into the side of the RV. I took my time thinking about it but eventually called Ethan in with the reassurance that I would not kill him. I asked him to show me where the errant stick had struck and to my horror he led me to the front of the RV and pointed inside the grill. There it was, a fairly large hole in what I thought was the radiator! Now the pieces were coming together.  I was sick. A hole in the radiator meant I would not be able to drive. We would have to be towed from a campground far from civilization, and the radiator would have to be replaced. Dollar signs were spinning through my head and I was no longer a happy camper.

In a panic, I called my brother-in-law who, among other things, is a mechanic for a friends race cars. To make a long story short, he found a mechanic in the nearby town of Stanley (population 63!) who drove to the campground to help me. GOD BLESS THEM BOTH!! When he saw the hole he told me it was not, in fact, in the radiator but rather in the air conditioning something-or-other. Turns out Eric's diagnosis from Singapore was not too far off! I was safe to drive, just couldn't use the air conditioner. WHEW!
Posted by bristowmom at 10:57 PM

Oh my!!
What a good thing it wasn't the radiator.

Looks a lovely spot to camp but you are so brave going alone. What did we do before mobile phones and texting?