A while back my husband, the puppy and I visited a popular spot in Boise, "Table Rock". It is a plateau in the midst of the town. On the edge of the plateau is a huge cross which is illuminated at night. I've heard comedians make jokes about it and I know there was at least one atheist group that wanted it removed.  Thankfully the group was unsuccessful, because the cross is one of the things I love about Boise. 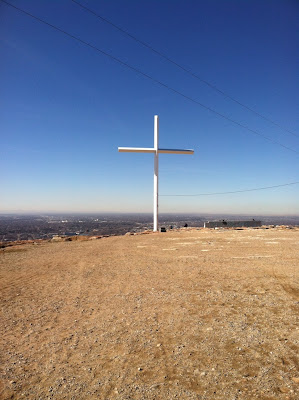 There are trails that you can hike from the bottom to the top of Table Rock.  I didn't actually realize that before we were at the top.  We drove most of the way, but at a certain point the road was closed so we did "hike" part of the way.  Here is my husband standing near the edge.  Can you see the mountains way off in the distance?  There are mountains to the north and south of the city, and mountains are always beautiful. 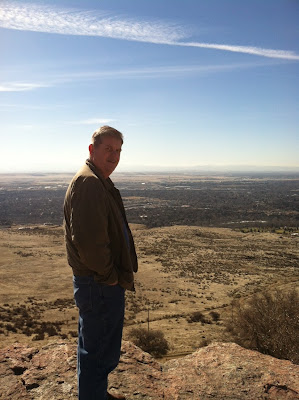 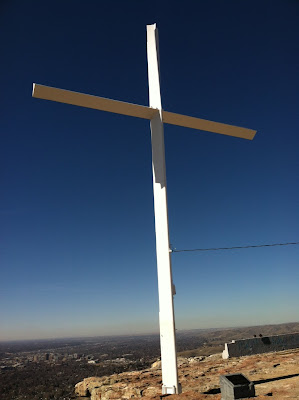 The (small) city of Boise is in the distance to the right. 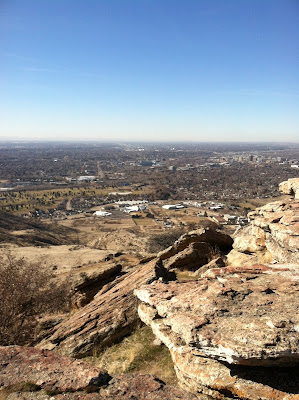 Eric and the puppy, hanging out at the edge of the plateau with the city behind them. 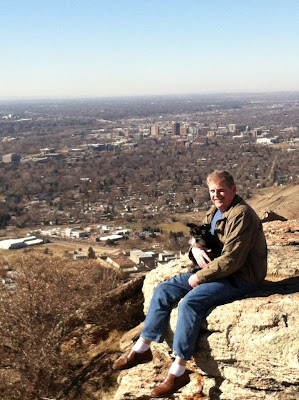 A bit of news for those of you who "know" me through blogs: In less than 1 month we are moving again! We have found a lovely home which sits on "the rim" - the edge of a cliff. It has sweeping views of the city, the Snake River and Table Rock. We cannot wait to get there!
Posted by bristowmom at 11:55 PM

Lovely to see you again. I look forward to hearing about your next move.

Well, hello! I had completely lost track of you and am so pleased to find you again.:) My sister lives in Boise; I shall have to have her take us up to Table Rock the next time we visit. Are you missing Taiwan or is it nice to be home? ("Both" is a completely legitimate answer.) Best of luck on your move!

So watch this space I guess to see where you are moving too.