As I was researching hotels before our trip to Bali, I looked at one called the Melka Excelsior. It's main claim to fame is that they have a dolphin pool and offer you the opportunity to swim with the dolphins. While I thought that would be great fun for the kids, the reviews I read of the hotel were awful so I chose another hotel to stay at while in Lovina. There is not a lot to do in Lovina, mostly you just stay there so that you can go out to the ocean to see the dolphins (which I posted about here.) So when we found ourselves with some time to kill, we decided to mosey on over to the Melka Excelsior and see if we could arrange for the kids to have a dolphin swim.

As we walked into the grand lobby we all thought I had made a mistake by not choosing to stay at this hotel. It was lovely. As it turned out, we missed our chance to swim with the dolphins since that is done only at specific times and we arrived just after one of those times. We were severely dismayed. We tried everything we could think of to get someone to bend the rules, to no avail. As consolation, the hotel also offers pony rides on the beach so we signed the kids up for that.

On the way to the pony corral we were guided through the hotel's small zoo and past the dolphin pools. (Sniff, sniff. We really wanted to swim with the dolphins.) Our guide asked if the kids would like to pet the dolphins. Why, yes! That would be better than nothing. And so it began. 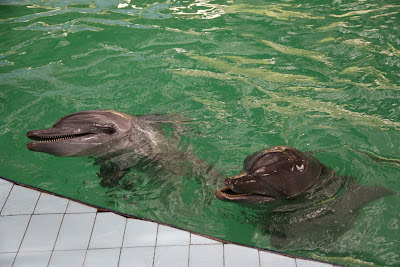 There were lots of men in wet suits around, I assume they were all part of the dolphin training crew. Very quickly several of them came to the rescue of the poor children whose parents had messed up by not getting them into the swim program. While one trainer called the dolphins into position, another gently led the kids toward the dolphins. They were quite hesitant at first. 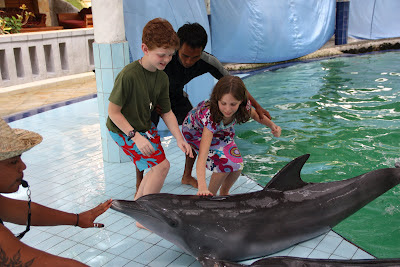 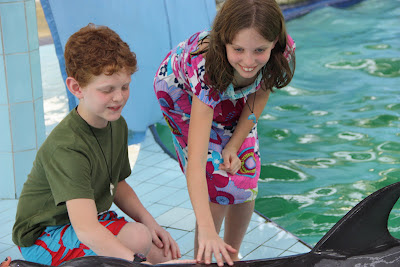 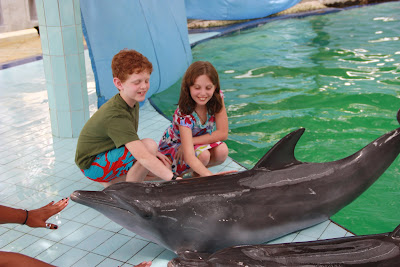 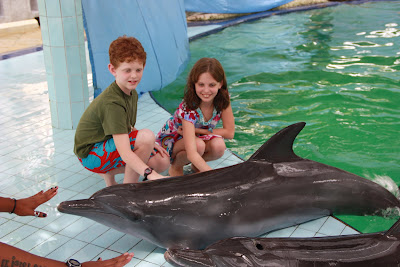 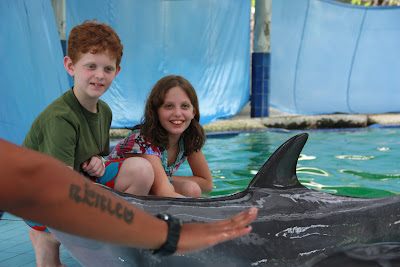 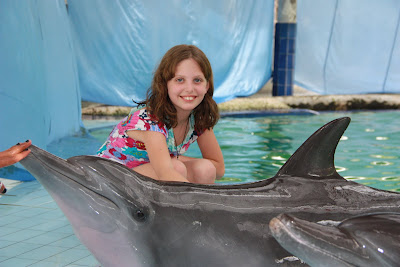 I'm not sure what that face was about, but I think it is funny! 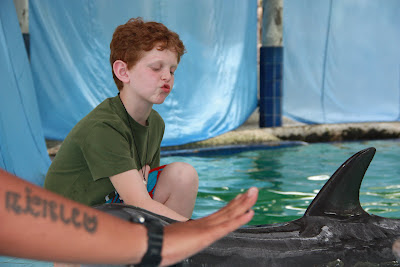 While it had been impossible to bend the rules for a dolphin swim, the staff at the Melka Excelsior did everything they could to give my children a wonderful, memorable experience with the dolphins. And at the end of the day the kids (Anna, especially) realized they would have been too scared to actually swim with the dolphins. Petting them was just exactly right for my kids. And then they got a pony ride to boot! (That was a bit of a let-down, so hurray for the dolphins!)

I have looked back at the reviews to try to remember why I elected not to stay at this hotel. I'm a bit suspicious that perhaps the reviews are written by owners of other hotels in order to steer guests away from the Melka and into their hotels. Because although I didn't see inside any of the rooms, from the outside everything looked very nice. Oh well, we stayed in a nice enough place. I hope to put up pictures of the places we stayed soon.
Posted by bristowmom at 7:16 AM

Sometimes, I think, people put on unpleasant reviews for no reason except to boost themselves.
The children must have loved those few moments with the dolphins!

You have such a cool blog. msw

Great experience for the children.

Has been quite a bit of publicity here about untruthful reviews on hotels and some have caused owners to lose money.