...I have toured half of Taiwan. Or at least it feels that way!

I have a new friend from Bible Study who has offered to show me Taiwan from an insider's point of view. In addition, another Taiwanese friend - who currently lives in America which is where I met her but is MORE currently visiting her husband here in Taiwan - (got that?) is showing me around. I am exhausted, but it's a better sort of exhaustion than that which I felt 2 weeks ago.

My pictures are in backward order because I am trying to hurry.

Yesterday Gloria (my new/old Taiwanese/American friend) took me to Danshui. Then, just as were were stepping off the MRT preparing to go our separate ways, Eric called to say he would be home to get the kids from the bus so I didn't have to hurry home. Accordingly, we shopped a Shilin Street (day) market AND the Shilin night market. I left home at 8 a.m. and returned at 10 p.m. with extremely tired feet and legs. We had been walking almost that entire time!

We also did the tiniest bit of shopping in Danshui, at the end of our tour. Here is the street in Danshui. 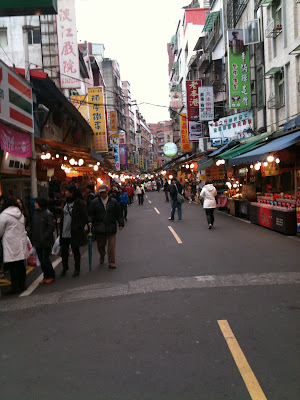 We stopped for lunch at a restaurant whose owner is a friend of Gloria's. The interior was decorated very nicely. It is 3 stories and has a nice view of the river. Gloria was determined to get me to try Taiwan food. Because I trust her I did try several things throughout the day. At the restaurant I had some beef and rice (safe) and I tried a couple bites of things out of a pot of stuff that was brought to our table. There were shrimp which I normally love. However, in Asia shrimp are cooked straight from the water with nothing removed. I told Gloria I cannot eat something that is looking at me so I refused to try the shrimp. I also refused to try the clams. I tried a bit of a dumpling and some other noodles but because they had been in the mix of this pot I didn't like the flavor. There were also meatballs (different from American meatballs) tofu and egg dumplings in the pot. Sorry but I didn't try any of it. The flavor was too off-putting to me. Nevertheless, the place was beautiful and I would probably go back. 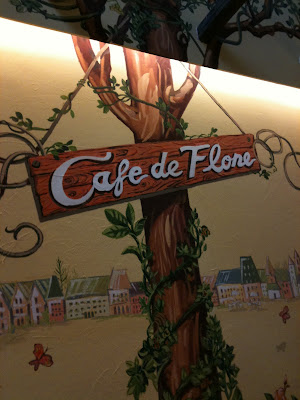 A bit of the boardwalk in Danshui. (Just FYI, we were technically in Bali, not Danshui. But it was Bali, Taiwan not Bali, Indonesia. The latter would have been much warmer!) The boardwalk was lovely. Well-maintained. Unfortunately it was quite cold and windy, but that meant we had the place almost to ourselves! 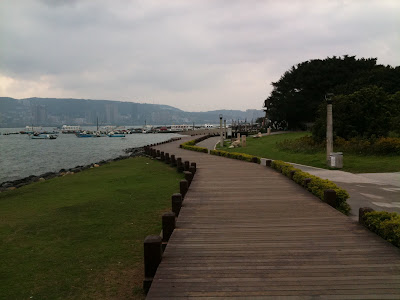 A lovely Catholic church in Danshui. Excuse the darkness of these pictures - I forgot to bring my good camera so all were taken on my phone. 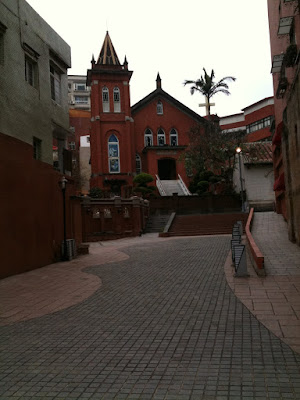 Another lovely restaurant in Danshui. This would be a wonderful place to sit on a hot summer afternoon. It is right on the riverfront. 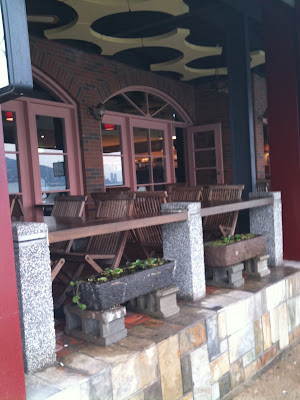 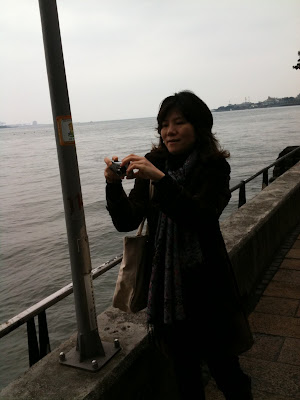 I will need to go back on a nice day with my good camera. Danshui was a lovely area. The river is wide and empties to the ocean. There are many mountains around and also a lot of very modern, tall buildings. It reminded me a bit of Seattle! 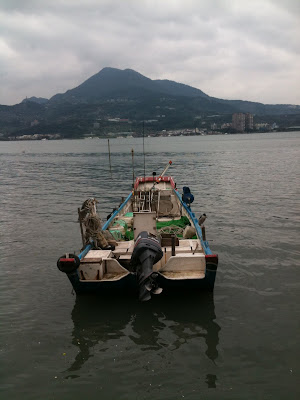 Earlier in the week and closer to home I was documenting the fact that spring has arrived. These flowers are at the entrance to our church. 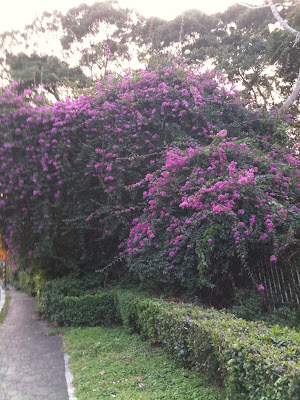 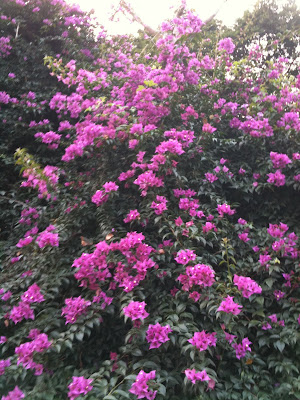 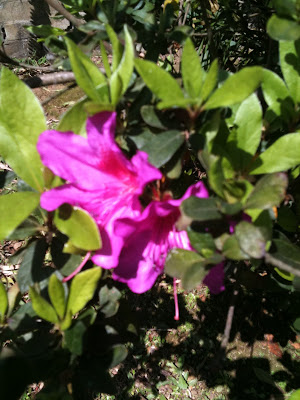 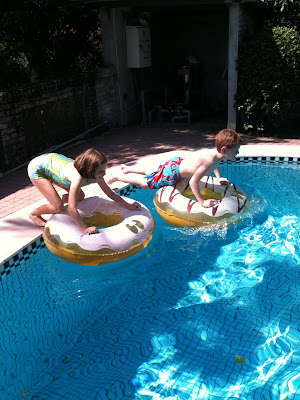 On Tuesday I accompanied Sandra to the Botanical Gardens. There wasn't much to see in the way of gardens. The area has large ponds which fill with Lotus flowers in June and July. I will go back then, I hope, to take pictures. However, there are many other wonderful things to see in and around the Botanical Gardens. One thing which wowed me was an old style Chinese house. Sandra told me that she grew up in something similar to this and as we walked through she shared a few of her childhood memories. Priceless tour - not something you could get from any paid tour!

My excuse for poor photos THIS time is that Sandra is giving me whirlwind overview tours so doesn't stop long for me to take pictures. The idea is that if I like something I can go back on my own and explore further. I will definitely be going back here. There is much to explore.

This is inside a beautiful and very large room of the house. In the far back of the picture are door which enter into the homes courtyard. As I understand it, various family members would have lived in separate rooms on either side of the courtyard. The parents and/or grandparents lived at the far side - across from the courtyard entrance. Maybe, HOPEFULLY, I will post take some nice pictures someday and post them with a more complete explanation. 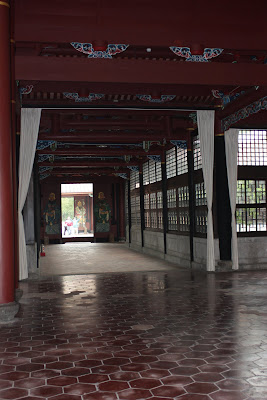 A pretty little waterfall within the Botanical Gardens. 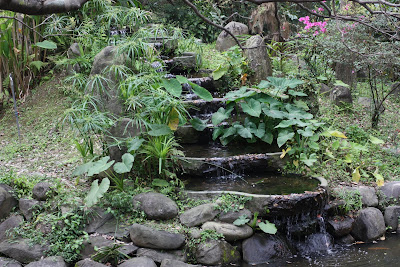 Part of the walkway through the gardens. Sandra said tourists never go to this park - only locals. It is wonderfully peaceful. 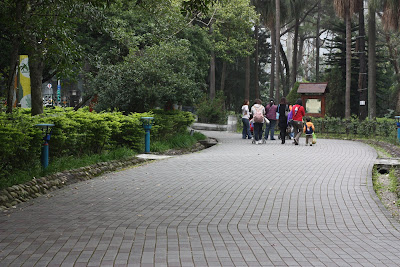 There were a few Iris near the edge of the ponds. 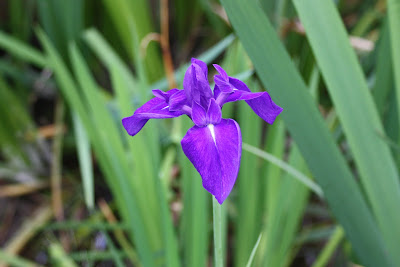 There is also an art museum. These paintings are hung OUTSIDE. I loved looking at them, although I had to hurry past most. 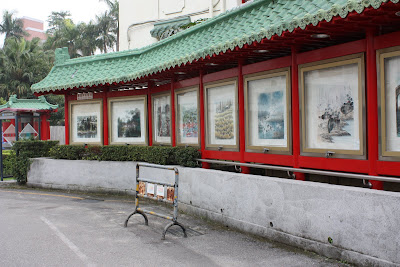 We did linger in front of this painting because, similar to the building we toured this depicts the way Chinese lived in the past. Sandra took quite a bit of time explaining it all to me. 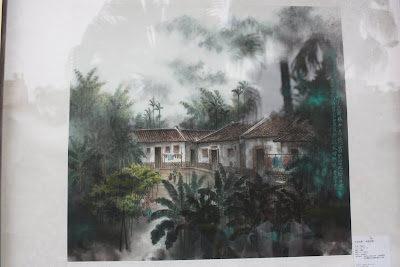 This is the South Gate of Taiwan, erected during the time of Chiang Kai Shek for protection. Originally there were soldiers with guns up there, ready to shoot any attackers. Now it is surrounded on all sides by very busy streets. 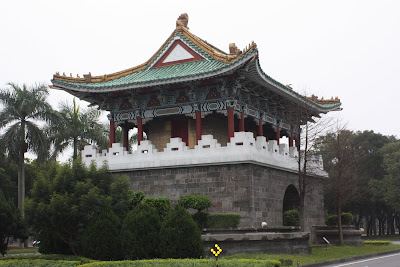 And this is Sandra, my new friend. I have been greatly blessed by wonderful friends this week - old and new. 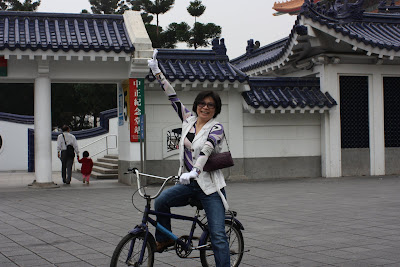 Just a few more "spring shots" - all taken at our home. 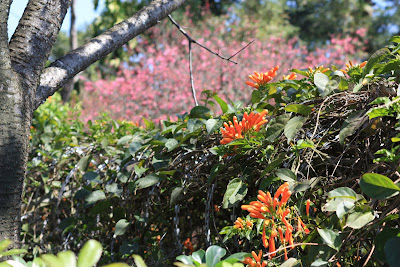 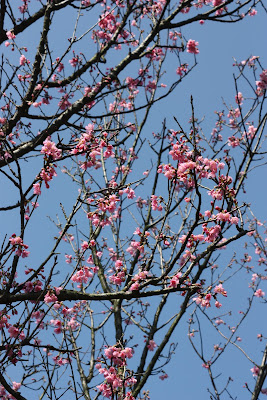 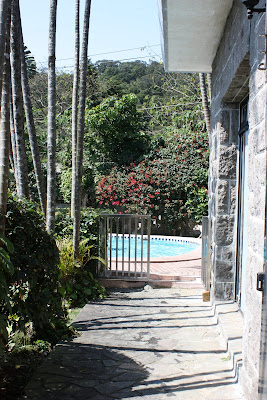 Posted by bristowmom at 1:25 PM

What fascinating photos, all so different to our life in the West.
I'm so glad you are finding good friends.

Gorgeous pictures and scenery! What an opportunity for you.

So great to hear from you! Thanks for the mini-tour. It all seems so facinating and such a gift to be able to see the "real" Taiwan with good friends.

One thing stands out to me in all of your photos from Taiwan - a lack of litter. The streets and sidewalks all look so clean. People there must take great pride in their cleanliness. Not so here, people seem to litter all the time figuring somebody else will clean up after them. (Which they do.)

TW, interesting that you would comment on lack of litter because I always think it is so dirty here! The sides of buildings are all blackened. But you are correct about the lack of litter and I shall have to keep that in mind. Denise told me that in India everyone sweeps their trash onto the streets. Sounds like the difference between India and Dubai is that in India no one bothers to clean the trash from the streets!