My husband just returned from 2 weeks in Taiwan and I have to share a story from his trip.

The kids love it when Dad travels because he returns with gifts. Anna told him she wanted a Japanese dress. (She calls everything Asian "Japanese".) So for the first week and a half whenever Eric was anyplace with stores he looked for authentic Asian clothing. Unfortunately, Taiwan has become so westernized that he could not find anything. All of the stores he was seeing were the same stores we have in America. Just a day or 2 before the end of his trip he mentioned to someone at work the fact that he could not find any of the clothing he was looking for. That person went to his secretary and instructed her to help Eric find what he was looking for. The secretary apparently went to the executive floor and returned a short time later with instructions for finding a dress. She had instructions written out in Chinese! However, she explained to Eric exactly where he was going to go and how much he was to pay for the clothing. Her telephone number was on the paper and she said if the store owner tried to charge him any more than the amount she stated that he was to tell him to call her. The secretary called a cab, took Eric to the cab and explained to the cab driver, who only spoke Chinese, everything that was to take place. Eric said they then left on an adventure through narrow winding roads and down back alleys. They arrived at some remote building and, as he had previously been instructed, he climbed the stairs to the 2nd floor and knocked on a door. He was let in by "a 200 year old" Taiwanese man. The man's wife was at work sewing garments together or embroidering them or something. Neither of them spoke a word of English and Eric doesn't speak a word of Chinese, but the secretary had told the man exactly what Eric wanted and apparently had negotiated the price. (I wonder, if the man tried to charge too much, HOW exactly was Eric to tell him to call the secretary?) Eric came home with this beautiful dress for Anna: 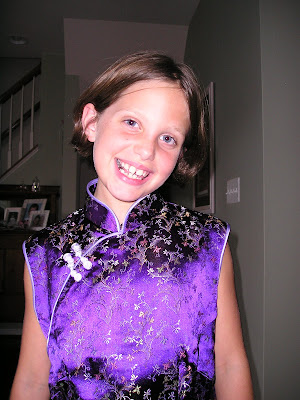 Posted by bristowmom at 4:53 AM

Beautiful story for a father's love and a beautiful dress...