We had a graduation today - preschool graduation! Unfortunately, my dropped-in-the-parking-lot-and-swimming-pool-too-many-times camera didn't work very well. It decided at a critical moment to only take one picture at a time. After each picture I had to turn the camera off then back on in order to get it to take another picture. This happened just as Ethan was walking down the aisle to receive his "diploma", so I missed getting a picture of the actual event. Here he is before and after (actually the pictures loaded as "after" and then "before". Whatever!) 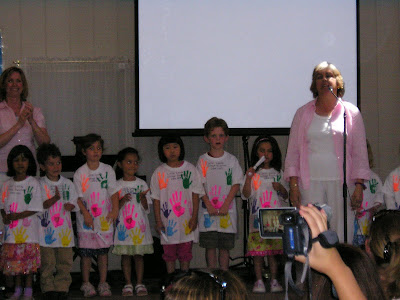 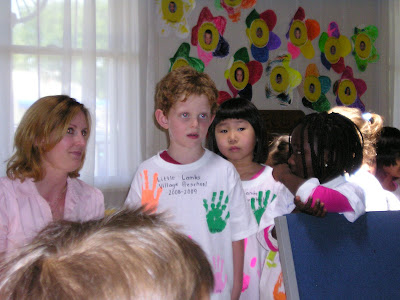 I know Mom's are supposed to get teary and emotional at these events. My baby graduating and blah, blah, blah. Not me. I do a happy dance every time they pass a milestone. Woo-hoo! One step closer to them growing up and leaving me in a peaceful house! I'm a rotten mother, I know.

By the way, do you notice his funky hair? He decided to give himself a haircut a few weeks ago. Chopped a section right out of the middle. He has no idea how goofy it looks. Often it curls up on either side and looks like he has horns! I guess it's time for a summer shave.

Oh! One more thing. Each year the school has had them glue their picture on to a flower which says "I'm blossoming into..." They put what the child says he is going to be when he grows up. Last year Ethan's grand ambition was to be an ice cream salesman; you know, the guy who drives around in the truck playing annoying music and selling highly overpriced ice cream? This year, thankfully, he has set his sights a little higher. He now intends to be a secret agent. No free ice cream for me I guess. Maybe a cast off car or two? You know, James Bond BMW's and such. Nah, by the time he is old enough to cast off a car I'll be way too old to get into a sports car.

Posted by bristowmom at 4:45 AM

There is still time. Maybe next year he will go back to ice cream sales. I love the photos.

I remember how I handed him a sundae once and he wept and said, "I hate sundaes." LOL

You're right R! I had forgotten about that incident. But perhaps there was some logic to his past choice: he wouldn't eat the profits!

He definitely wouldn't if you sprinkled meat on top!

I am belly laughing.