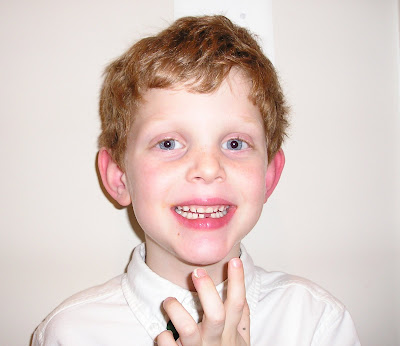 I suppose you don't see what the big deal is, so I'll explain. These events are just happening too rapidly for me!
I returned from Mexico exactly 1 week ago, at which time I was informed that he had his first loose tooth. I almost didn't believe it because he is JUST 5-1/2 and I didn't expect this until AFTER he turned 6. The next day he told me he has 2 loose teeth. This morning I found that a new adult tooth had already broken through behind the baby teeth. And now, just a few minutes ago, he pulled it out! What???
First of all I think Anna was a bit older when she discovered her first loose tooth. Then it remained in that state for weeks. I know because Eric was in Singapore at the time of the discovery and I was panicking - I am the most squeamish person on the planet and I am grossed out by loose teeth - what was I going to do if I had to deal with it actually coming out?!!! Well, Dad made it back with her tooth still intact. The big day arrived, but it wasn't just a matter of the tooth falling or being pulled out. Oh no! Anna held a tissue in her mouth over said tooth for 5 hours! (She appears to take after her mother in the squeamish department.) Once Dad came home from work he finessed it out of her mouth.
So along comes Ethan... One, two, three... all done! I'm still in shock.
I guess there really IS a difference between boys and girls.
Posted by bristowmom at 5:34 AM