Where We Stayed in East Bali

We stayed at two places in east Bali, although that had not been the original plan. Strangely, the one place we were most anticipating ended up being the one place we could not tolerate! I think I will not give the name of the first place because the fact that it didn't work for our family does not mean it was not a good place. I wouldn't want to give the place a bad name. The property was lovely. The issue was, well actually there were two issues: First, once again the fact that Balinese people don't mind sharing their homes with nature became an issue for us. We were visited on our first (and what turned out to be our last) night at this property by an ENORMOUS spider. Which shouldn't have bugged us that much, because we sometimes have those in our house in Taiwan. But for some reason that spider seemed to put every one of us over the edge in terms of what we could tolerate. Second, the food. I personally could go back to stay at this property just FOR the food. It was amazing - healthy, tasty, unique and local. I normally am not into "health" food but this property has a garden from which they pick ingredients for the days meals. They have everything there, including coconuts which they pick fresh for the day. Here is one of the staff climbing a coconut tree to get the daily supply: 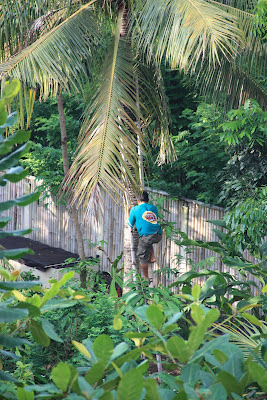 They cut several of the coconuts open and gave them to us in various forms so that we could eat the meat and drink the "milk". 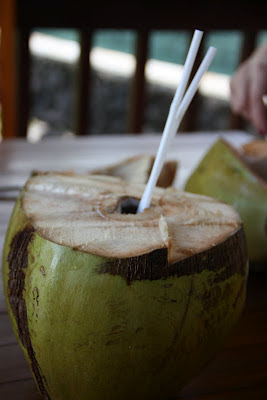 Trying it made me nervous because I do not usually like things that are new and different. But I figured I had nothing to lose, so I tried. I can not say I loved it, but I do think if I lived there and ate this stuff every day I would develop a love for it.

One of the things we were served at this property was a dessert "pancake". It didn't look anything like a pancake as Americans think of pancakes. It was almost pure white and almost gelatinous (though not quite.) It was rolled up and inside was a mixture of coconut and palm sugar. We all tried it very hesitantly. Eric and the kids immediately said "no!" Most likely the texture put them off, because we all have issues with the texture of food. But for me, that pancake was so good that I am sorry we didn't stay longer just so that I could have requested more. We were also served fresh fish (nicely grilled) red rice and an eggplant curry. I have never cared for eggplant (because of the texture!) but I do love curry so I gave it a go. Loved it. It shocked me that I was eating healthy food and enjoying it! If it hadn't been for that darn spider... (I cannot help but think now of the nursery rhyme which I will twist just a litte: Little Miss Muffet sat on her tuffet eating her curry and whey. Along came a spider who sat down beside her and frightened Miss Muffet away.)

So away we went.

The kids and Eric went on a submarine ride while I did some shopping and tried to figure out where we could stay. I stopped into a little beachside place that had rooms available. It wasn't hard to figure out why.

Thankfully we had a tour book with us. I found a place that looked promising and had a restaurant, so we decided to go to the restaurant for lunch and take a look at the place. As soon as we walked into the restaurant we knew THIS was where we wanted to be. We inquired with the waiter about open rooms and were told they were fully booked. Our hopes were dashed.
But then, Eric decided to go to the front desk and ask, just in case. When he came back he said they had one room and they would hold it for us to look at after lunch. The room was small for 4 people, but we were so at the end of our tether and the property was so lovely that we didn't hesitate to take it. And so, the place we stayed in East Bali was the Alila. A lovely place. I would recommend it in a heartbeat.
Once again, I am using a photo of the room from TripAdvisor because I didn't remember to photograph it myself. This photo of Alila Manggis is courtesy of TripAdvisor

Out of the picture, to the left, was a sort of daybed which both kids managed to sleep on most of the time! Out on the balcony is another daybed which the hotel set up as a bed for us with a mosquito net surround and regular sheets. I tried it one night, mostly because I love to sleep near the ocean and listen to the waves. It didn't work for me. I was awakened about 1:00 a.m. by a giant gecko (yes, they were here too. They are everywhere.) making his "geck-o" sound. I ran inside where, thankfully, this property managed to keep the creatures at bay.

Besides being lovely, the Alila caters to families with young children. They have concierges who lead different activities and at the spa they offer children's massages! Our kids were a bit jealous of the fact that Eric and I had been indulging in massages (yes, plural. We had several. As I said before, Balinese massage is fantastic and cheap.) So we decided to let the kids give it a try. They were hooked! Our entire family spent a lot of our time at the spa! Anna and I even had spa treatments at an outdoor pavillion which was perched at the edge of the ocean. Heavenly. 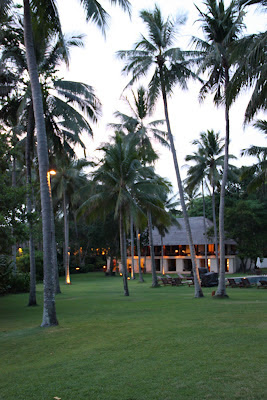 THIS was our kind of place. 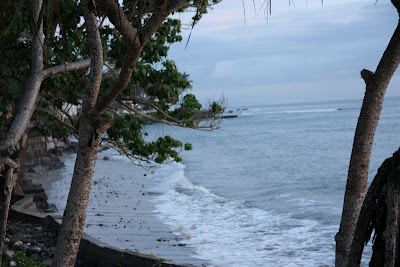 There are tables situated around the grounds near the restaurant where you can choose to have your meals. We did - more than once! Lovely. 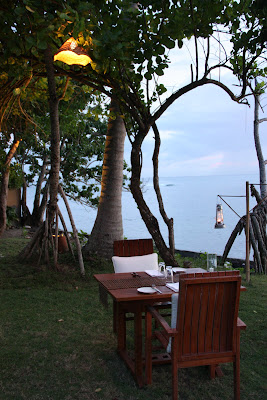 This is the actual restaurant, where we first ate and dreamed of staying in one of the lovely rooms. 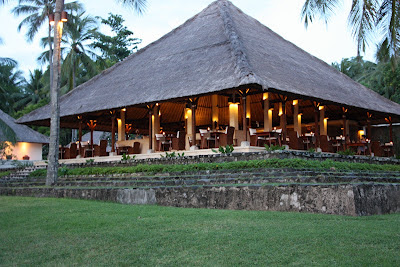 All over the property (all over Bali, actually) there are Frangiapani trees. They have the most lovely smelling blossoms of anything I have ever smelled. Hmmm - not sure if they are nicer than Jasmine but they might be. In any case, besides the wonderful fragrance they have great color. Ethan came up with the idea of inserting progressively smaller blossoms inside of larger ones, thereby coming up with these pretty creations: 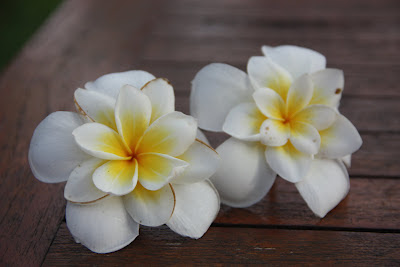 A view from "inside" of the restaurant, looking toward the sea. 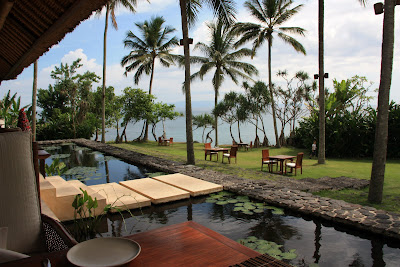 And finally, this is the view from our balcony. Paradise, at last. 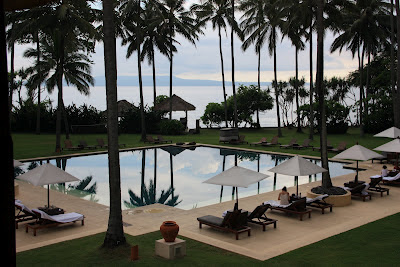 Don't think I would have wanted to join you in the first place.Even the coconuts are something I cannot stand but the second.