From Tree Top to Ocean Floor

The thing Eric most wanted to do in Bali was go scuba diving. There is a dive site that includes the USS Liberty - a cargo ship that was torpedoed (I think?) by the Japanese during the war. I believe it was beached, then later dragged out to sea.

The plan was for the kids and I to go to the beach with Eric and snorkel from the beach while he dove. I have to admit, when the day came I didn't particularly want to go. Up to that point we had been quite busy and I just wanted to relax at our lovely hotel. Thankfully, I decided I should not be a party pooper and so I went along. It wasn't over-the-top amazing, but it was a good day. Mostly I think I was glad to witness the kids having a cool new experience.

Eric saw the best sights, since he was diving. 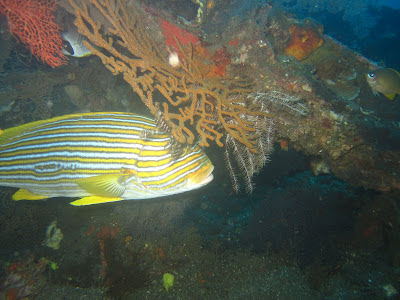 He took at least 8 photos of this creature, which cracks me up because while I don't know what it technically is, it looks to be some sort of sea snake and Eric, to put it mildly, does not like snakes. 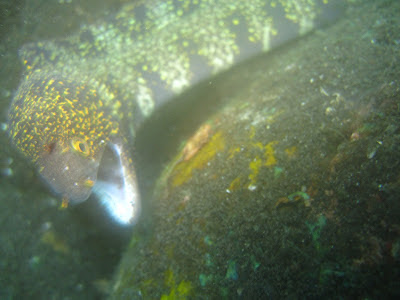 And now for my highly technical narration: This is the steering wheel of the USS Liberty. (I don't know anything about nautical terminology. My husband was a sailor so I probably ought to have picked up some knowledge from him. But I haven't.) 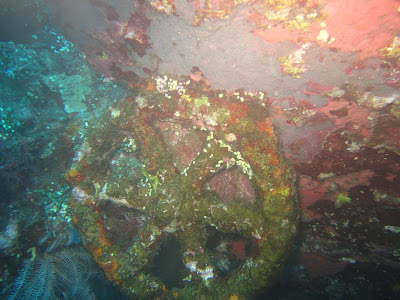 The family before we started. Thankfully you can't see any of us too well, because mostly it was not a pretty sight. They suited us up in whatever they could find. Ethan actually looked cool, but Anna was in a wet suit that must have been at least 3 sizes too big while Eric and I were squeezed into ours. 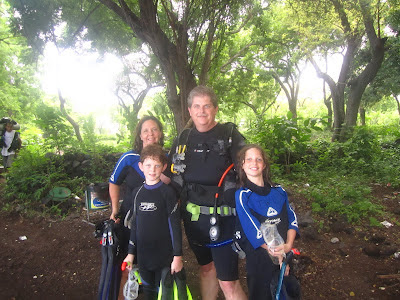 The Liberty is actually close enough to shore that you just swim to it. While Eric went under water, the kids and I (with a guide) snorkeled along the surface out toward the ship. Having never done this before, Anna was struggling a bit with her mask and snorkel. Progress was nevertheless being made, until we came to this: 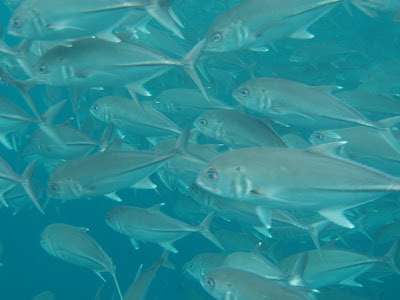 Anna, being totally my daughter, was quite freaked out by the idea of swimming amongst all of these large fish (and they were quite large.) At that point, I headed back to shore with Anna while the guide and Ethan continued on.

After the guide and Ethan returned, we decided to try again. The guide was absolutely wonderful with Anna. He stayed right at her side the entire time, sometimes with his arm around her and sometimes holding her hand to gently lead her. Here they are after successfully swimming to the Liberty and back: 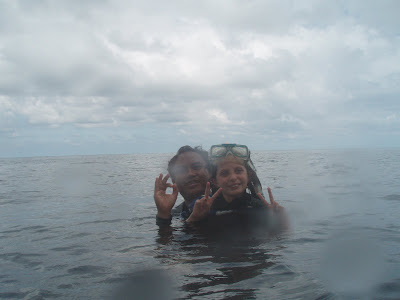 The 2 guides (our snorkel guide and Eric's scuba guide) were impressed with something about Ethan, so that they asked if he was interested in trying to dive. Silly question - he had been quite bent out of shape about the fact that he didn't get to go with his Dad. So they took Ethan just off the beach and taught him a bit about diving. Then our guide used his oxygen tank and some dual-breathing apparatus to go under with Ethan, just a few feet. 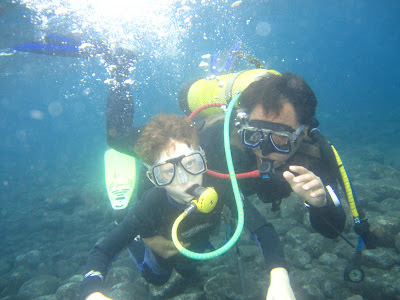 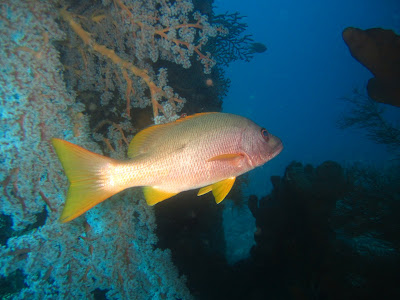 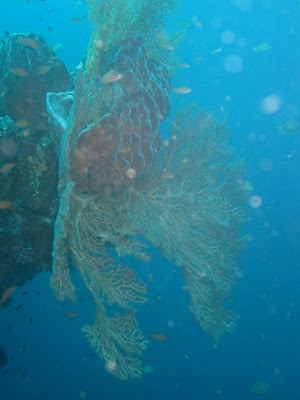 A great day. I am glad I didn't miss it. I think this will be one of those memories the kids will carry their whole lives. I hope so!
Posted by bristowmom at 12:41 PM

What a great acnievement for Ethan, and what kind guides you had.

Your sea snake definitely looks like an eel. *shudder*