"Signs, signs, everywhere are signs. Blocking out the scenery, breaking my mind. Do this, don't do that. Can't you read the signs?"

WOW. What a beautiful day. We had a blast. 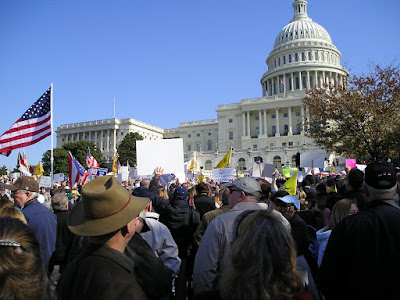 Eric and I attended the rally at the capitol along with a few thousand of our closest friends. (I guessed there were about 5000 people there. Eric guessed 20-25,000. The number we've heard is 20,000, so I guess Eric wins the prize.) As you can see from the first picture, lots of people brought signs and/or flags. This is really just a representative sample of the crowd; I don't have a panoramic camera so just took this slice.

After the rally we were asked to go up and down the halls of the Congressional office buildings talking to the Representatives and asking them to vote "no" on the Health Care bill. The lines to get into the office buildings were enormous and we were hungry, so we thought we'd outsmart everyone by going for lunch. We figured by the time we returned the lines would be gone. We were wrong. There were still lines, though possibly not as long as they had been. These are people waiting to get into the Cannon Office Building. The door is at the top of the steps. 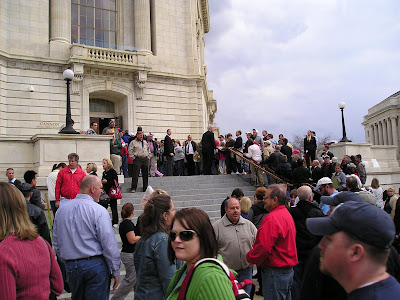 Here's a challenge: Can anyone spot me in the above picture? I'll give you a hint. I've gained 20 pounds and grown my hair since January.

While we were waiting a reporter from FoxNews came out. A large cheer went up from the crowd. I cannot even remember his name, but I was still all excited. Fame is weird, isn't it? Despite not knowing his name, I do know he is "the" reporter who traveled around with the Tea Party Express this summer. 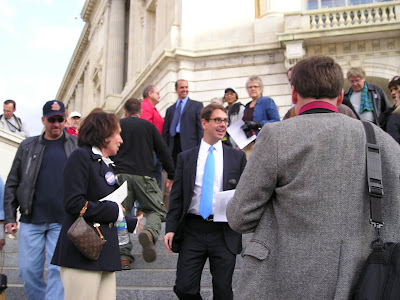 Take a close look at the girls in the middle of the next picture. Do they look frightening to you? They were taken out of the building in handcuffs. Terrorists, I am sure. Scary, right-wing terrorists. I am not sure of this connection, but here is what I think might have gone on with them: We heard that Speaker Pelosi did not like all the riff-raff gathering outside her office so she had them arrested. (Seriously!) I think that would have happened around the time we witnessed these girls being hauled out, so I'm guessing they might have been part of the riff-raff crowd. 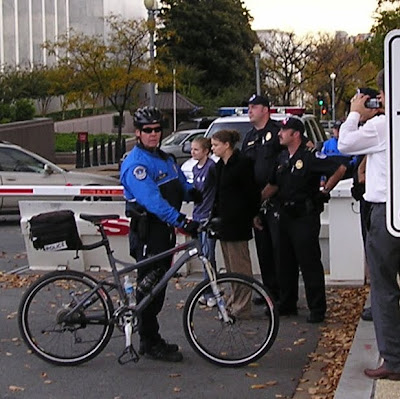 Even though the goal of the day was to seek out Congressmen who might be voting "yes" on the bill and ask them instead to vote "no", we chose to spend part of our time at Congresswoman Bachmann's office. We wanted to thank her for her work and pass on greetings from mutual friends. On the way to her office we crossed paths with Jon Voigt who was just leaving. This is the first time in my life I've ever spoken to a "star". I was going to say this was the closest I've ever been to a star, but there was that time with Bruce Willis... But I didn't speak to Bruce Willis, so this is a milestone. Jon Voigt was thanking people for attending. I thanked HIM for attending. It is amazing to me that a Hollywood type is on this side of the political spectrum. Isn't "Hollywood conservative" an oxymoron? Not always thankfully, not always. 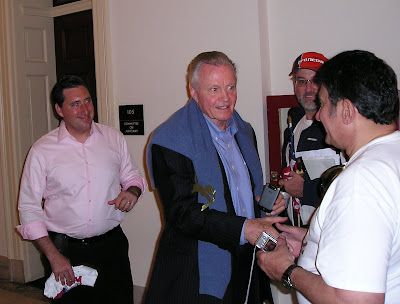 And then, I got to speak with Congresswoman Bachmann. What a gracious woman. And so beautiful. And articulate. I felt like an elephant next to her - it was awful. But I wanted the mutual friends to see that I truly did pass along their greeting, so I got over myself and had Eric take this picture. 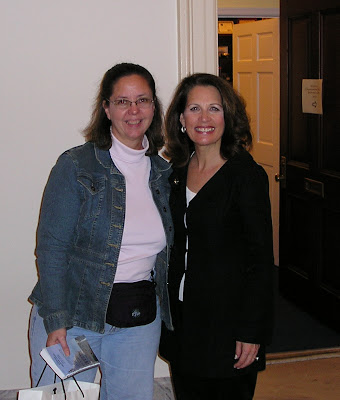 Yesterday I sent an e-mail to friends and family letting them know I would be attending this event and asking if any of them would like me to bring their name along as someone who wished they could attend. I brought with me 35 names representing 8 states! In addition, when I got home tonight others had e-mailed me so I would have had over 40 names. I wrote up a list of the people who said "Yes, bring my name! Tell my representative I want them to vote no!" I had the list broken down by state and before leaving for the rally I identified the correct representative for each individual. Unfortunately, we were not able to visit all of the representatives. We were limited by time. We wish we had brought snacks with us so we wouldn't have had to use valuable time eating, but we just didn't know. If there is a next time we would be better prepared. In addition to taking time to eat, a friend had agreed to take our kids to her house after school and we didn't feel right leaving them there too long. Here is what we managed:

Walt Minnick, 1st District, Idaho; We made him our top priority because he is a "blue dog democrat". We were a little surprised by the reception in his office - it was fairly cold. The receptionist took the names of the constituents we were speaking for and said she would pass on the message. I assumed he wouldn't have had many visitors since he's from Idaho. But I might be wrong. People were passing around lists of blue dogs and asking that we especially try to talk to them so perhaps he was flooded with visitors while we were at lunch.

Gerry Connolly, 11th District, Virginia; Word circulating amoungst the riff-raff (us) was that he had very rudely shut down a woman who tried to get him to explain why he would vote yes on this bill. I later heard a man on the radio who witnessed the scene so it wasn't just a rumor. He said the woman was on the verge of tears and several other visitors surrounded her to support her and tell her it was okay. I was too chicken to try to confront him, although I can honestly say that if I'd had more time I would have tried because our next experience was excellent.

Ann Kirkpatrick, 1st District, Arizona; I entered her office with fear and trembling. The receptionist seemed about 1 degree warmer than Walt Minnick's receptionist. However, we were told the Congresswoman's Chief of Staff would speak with us. Michael Frias greeted us warmly and ushered us into Congresswoman Kirkpatrick's office where we talked for some time. We told him right up front (as we had also told the receptionist) that we were not from Arizona but were there on behalf of some of their constituents. I doubt we made any difference in how the Congresswoman will cast her vote but I was fully impressed with how we were treated in her office.
This is why I am certain I would have tried to visit Congressman Connolly as well as Congresswoman Markey from Colorado if I'd had time. After a kind reception in what I perceived as "the enemy camp" my courage was up and I was getting in a groove of approaching the Representatives. Eric was loving it too. We would have loved to keep going. But it was 4:30 and we knew it would take a long time to get home. It did. We didn't pick the kids up until 6:30.
I feel like there is so much more I could say, but it's been a long day, it's late and I'm tired. Perhaps I'll remember and write more tomorrow.
One last thing... If you are reading this prior to Saturday, November 7th please call your Congressional Representative and ask them to vote "no". Word is that the Speaker wants to call a vote on Saturday. This bill needs to be defeated.

Thanks for seeing our rep from AZ. I didn't see my name taped to your forehead, but trust it was on your paper. Jon Voigt, I only know him from a Seinfeld show. I am sure everyones presence had an impact. And I am put out I didn't know you had your blog up and running. Found out through Mindy posting on fb!

Congresswoman Dickinson now has your name - I took it off my forehead. (Just kidding) Her Chief of Staff gave us his card to pass on to you. I believe he wants you to e-mail him. I write that in a seperate e-mail to you. Have been meaning to send an e-mail to everyone who participated with a link to my blog. Yesterday I was part too busy and part too lazy. I'll try today.