Repeat After Me: "He did not bow" 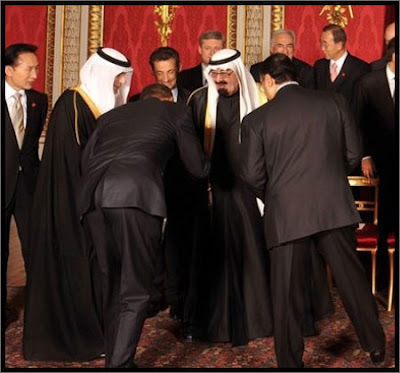 I have recently come to the conclusion that America's democratic experiment has failed. It was a grand attempt, it produced many, many good things for the world but it has ultimately failed. I think it had to ultimately fail because no government of man is ever going to be ultimately successful. The only government that will last forever is the kingdom of Jesus which will, someday, be set up on earth. I have twice received an e-mail which delineates the path of democracy. I remember when I read it I knew we were nearing the end but I don't remember the progression. I would like to see that e-mail again because I would be interested to see what comes next. I believe there was "dictatorship" in there somewhere but I don't know how close we are to that.

Since Obama became our President I have had the feeling that we were progressing quickly on our spiral away from democracy. Still, I was shocked last night when I saw that he BOWED to the King of Saudi Arabia. He did no such thing before the Queen of England. It sickens me. Absolutely, positively sickens me. This man is a fraud and a liar and.... AAAAGH! Do you know what is almost laughable? When I first saw the video of Obama bowing to the King the reporter who was doing the story said that Obama's people said "he did not bow". WHAT?? This is a SMALL example of Obama and his people. THEY LIE CONTINUOUSLY and for some reason the idiotic American people (automatons?) say "Oh! He did not bow. He did not bow. That was not bowing. He is not a Muslim. He did not bow." Isaiah 44:18 says "Their eyes are plastered over so they cannot see, and their minds closed so they cannot understand."

It is weird because I fully believe that God is in control of everything that is happening and I know that everything is for His purposes, and yet in the midst of that knowledge I just get so angry at what people are doing. At the stupidity, the lying, the blindness. I get so mad!!! But I guess that is okay. I believe King David went on a few rants before God. In the end he always spoke of God's love and said "Praise the Lord."

Posted by bristowmom at 7:42 PM

The way I see it, the battle was lost long, long ago. Now we are living amongst the ruins in the aftermath. It helps to cope if you adopt that attitude. Don't expect victories on the national level because they won't come for a long time. The best we can do now is evangelize, pass the faith on and worship God. He wins in the end.

I read something awhile back that I'm 99% sure you sent me. It talked about Christians looking to fix the countries problems through politics and why that won't work. It made sense and that, coupled with the realization that democracy has failed, has certainly brought me to the point where I no longer look for political victories. I am watching expectantly to see what God will do. But I still get mad...

Thanks for posting this.

So many Americans believe the idiot news commentators on television, that they can actually see the bowing, hear the commentary and believe it because they stopped actually THINKING FOR THEMSELVES years ago.