This month the kids started taking ice skating lessons. They LOVE it, which makes me happy. So recently we have spent our Saturdays at the ice rink getting in extra practice time. I put on my skates and go out with them. They think I can skate. The truth is, I skated as a kid but I'm a little old now and I just desperately hope not to fall.

Their first lesson was "how to fall". Ethan practices that a lot! He so loves being on the ice that he is all smiles most of the time - a very rare thing for our melancholy boy! He even smiles when he falls; well, most of the time. Every now and then he falls hard and gets upset for a bit, but overall he is just loving it. For Ethan it seems to be all about how fast he can go. They have to hop and dip and "make footballs" with their feet. He does those things fairly well, but mostly he just wants to motor across the rink as fast as he can. That seems normal to me, given that he's a boy.

Meanwhile, for Anna it's all about gliding. She enjoyed the first lesson but was a bit frustrated because she was specifically told NOT to glide. They were supposed to stomp their feet and fall correctly. Thankfully the second lesson allowed her to glide. I think I know how she feels. There is something about gliding that feels magical.

So at the moment it is Saturday, but they have gone to the rink without me. I needed a break from the constant talk. We (the kids and I) have been sick for about 2 weeks. Because of that I have slept in as much as possible. The result of sleeping in is the second I get out of bed Anna starts talking. She doesn't stop until she falls asleep. I love her but !!!!!!!!!! I need some peace!

Meanwhile...
Ethan has worn holes in all of his socks and most of his pant legs. Literally he had no socks left so yesterday we went to Target to buy some new socks. We came home with this: 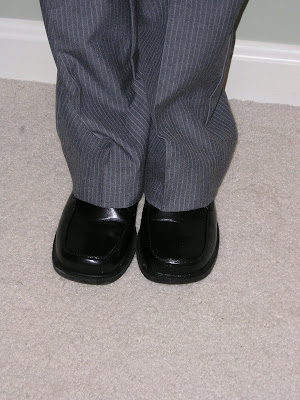 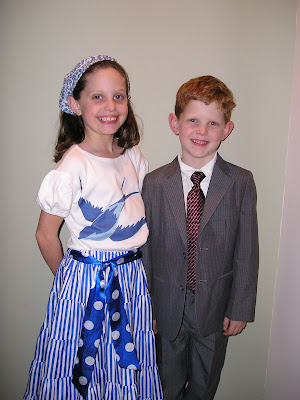 Anna first spotted the suit jacket. I thought it would take some convincing to get Ethan to try it on. (Silly me. This is the boy who loves bow ties!) He put it on and immediately wanted it. He did NOT want a sport jacket. They came in navy and black but NO, he wanted the gray pinstriped suit! And he wanted it BAD! I have to confess it did not take one bit of convincing. I about melted when I saw him in this. SOOOOO cute! For the record, next to the suits there were several ties and even a bow tie being sold. Maybe my bowtie-wearing-boy is setting the fashion trend! Anna picked up the bow tie. It was cute but I said no - Ethan already owns 4 ties and 3 bow ties so we did not need any more. He did however need new shoes. His Sketchers just weren't going to look right with a fancy suit. You should have seen his enthusiasm over getting dress black shoes! The whole thing is just too funny to me. I LOVE that he likes to dress like this. I think he is just so handsome all dressed up. But I honestly cannot figure out WHY he loves this or where it comes from.
Anna's outfit is new too, although it is not from Target. These are from the Amoretti line that I wrote about a little while ago. They arrived yesterday. Anna is, as expected, enthralled with the skirt. Absolutely, totally loves everything about it. It is her favorite color and it TWIRLS. She still loves dresses that twirl. I love that about her. I bought her another dress too but it will be unveiled around Easter. It will look very nice next to her brother's suit.
I leave you with a picture of us at the ice rink. I am going to go enjoy the quiet house! 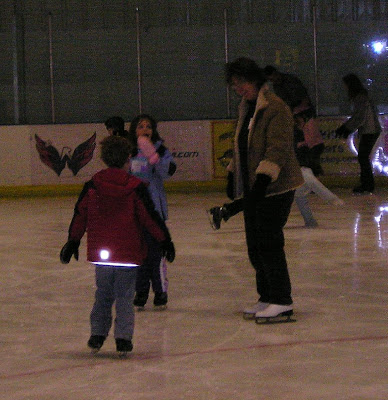 I love the photos. Don't break a leg!

Awwww....I can relate to holding onto those simple things, like when your daughter still loves skirts that TWIRL, and a son who loves bow-ties, and gliding on the ice. Simple things like that are so satisfying, aren't they!?

Jyllian has finally learned to ride a two wheeler alone (she's 8!! Kind of late!!) So we ride on a bike path and she takes great pride in knowing the rules: Staying to the right, and announcing "Passing on the left".
We've even found a creek to skip rocks on now, and we pass a field of blue bonnets on the way there. How good can life get?!?!