As you probably know, my Dad has been dealing with cancer for about 18 months now.  The good news is that, as I write this, it is still just looming in the background.  I expect that to change any day; in fact, tomorrow I will accompany him to the doctor for an update.   Overall though, Dad is doing quite well.

The not so good news is that cancer has come screaming to the foreground in Dad's friend, Peggy.  I have to admit I was shocked by this development.  Peggy seemed so healthy until a couple of months ago.  She developed a nasty cough which seemed perhaps to turn into pneumonia. In actuality she had lung cancer.  This week she finally learned that she has stage 4 lung cancer and it's time to be sure her things are in order.

I've known for weeks that Peggy has lung cancer, and I was under no illusions about the seriousness.   Very rarely does anyone survive lung cancer and Peggy is not a young woman,  so I knew how it would end.  Nevertheless,  the news today with a sort of time frame attached caught me off guard.

Peggy has become a fixture in my life,  a part of my family,  if unofficially.  Peggy always looks on the bright side of things,  gives everyone the benefit of the doubt,  and finds humor in things.  She is kind, gracious and classy, if a bit irreverent some times.  She has been a bright light in my Dad's life even as he continued to mourn the loss of my Mom. She has taken more of an interest in my kids than any of their own grandparents did, and that has meant a great deal to me.  In short, I have grown to love Peggy more than I ever thought I could and I am deeply saddened by the knowledge that I will soon be losing her. 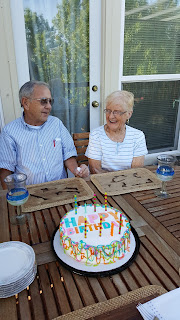 Posted by bristowmom at 2:29 PM

I'm so sorry to hear that. Cancer is such an evil disease.

so sorry that you are going through such a difficult time.