I'm back to share more of the story of our brush with fire.

I have difficulty sleeping,  so recently I've been staying get up until about 1:30.  It seems when I stay up late I am able to sleep with little or no interruption for about 6 hours.  So I think it was just before 1:00 Thursday morning when I decided to use the bathroom before going to sleep.  While in the bathroom I heard the sound of wind, so I looked out the window to see how strong the wind was.  As I looked into our backyard I thought the tops of the trees looked peculiar-  they seemed to have an orange glow.   I decided to go to another room to try and determine what was causing the glow, thinking perhaps we had left some light on.  When I looked out our front window I saw fire coming down the hill straight ahead of us as well as to my right.  My first thought was we need to get out of here, but it must have been followed by doubt about how bad things seemed.  I woke my husband and said "I need you to come look at something".  He took one look out the window and said "Get the kids!"  I asked "should we leave?"  I guess I believe I am too often guilty of over-dramatizing things so I was doubting my instincts.  Eric just said "Yes!"

I woke each of the kids and said, quite calmly, "I need you to grab some clothes and get to the car.  There's a fire on the hill."  I rushed to throw some clothes on myself and I think I wondered if I should grab any belongings.  The fire looked so ominous that I just decided to get out, and I didn't take one single thing with me.

We drove down the hill, which was just crazy.  There was fire everywhere.   My daughter was texting her boyfriend who also lives in our neighborhood.   He had been awake, and he woke his parents.   We stopped in front of their house but, comfortable that they were aware of the danger, we continued on.  (They also left shortly afterwards. )

We went to a park nearby so that we could watch the fire.  I think I thought the fire would be put out in short order and we could return home.  However, that was not what happened.  Idaho in the summer is very hot and dry.  We typically have temperatures in the 90's and low 100's with little to no rain.  The land around our neighborhood is typical of the area - sage brush and dried grass (called cheet grass).  It ignites and  burns quickly.  Fire crews from 4 towns plus the Bureau of Land Management were on the scene, because these fires move quickly.   While we watched from the park, the fire continued racing in every direction, including down the hill.  It was impossible to know if our house was on fire.  I began to worry about the fire spreading to the park we were in.  There was only 1 way into or out of the park and I was afraid if any people were evacuating we could get trapped in the park.  So, at 1:30 a.m., I called my brother to ask if we could go to his house.  Poor guy.

We were all too wound up to sleep.  We sat around talking for awhile but my daughter and I needed to see what was happening so we headed out again.  All over the city people had parked their cars and were taking pictures of the fire - at 2:30 or 3 a.m.!  We joined the crowds and talked with people for a bit.  We looked around for about an hour before heading back to my brothers house.  Still unable to sleep, we left in hopes he could rest because he had to go to work in a couple of hours.

We decided to go to a restaurant for breakfast.  In the rush to get out of our house, neither of the kids had put on shoes!  I don't know if it's illegal or just frowned upon, but generally you cannot go into a restaurant without shoes.  We tried to go to a store which we thought was open 24 hours a day, intending to buy the kids some shoes.  The store was not, in fact, open.  So we drove to the restaurant and Eric went in and asked if we could come in without shoes.  It was 4 a.m. and you could see the fire from the restaurant so they kindly allowed us in.

After picking at our food we decided to see if we could get to our house.  We could not.  There was a policeman at the entrance to our neighborhood and they were not allowing anyone to go up the hill.  He told us the Red Cross had set up an emergency gathering spot at a nearby  school and eventually we went there.  (After trying another turn at the park and discovering there were lots of mosquitoes!)  That was my first experience with disaster teams and although I didn't really need anything I was impressed by all of the volunteers.  They were ready to help with WHATEVER you needed.

Eventually we heard that we could go home.  The fire was still burning some grasslands,  but it was away from neighborhoods and the Fire department was confident it would not return.   (All of its fuel had been burned.)

That's it!  In the end there was only 1 house destroyed,  though originally we had been told 2.  Unfortunately,  the one house was an old home which had been in the family for 50+ years and we heard today it was not insured.  How awful for that family!

Here are some pictures which I captured from the internet: 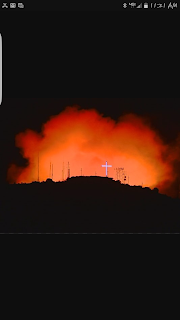 Despite the terrible circumstances,  I love this picture.  The cross is a permanent fixture on an area called Table Rock.  The cross is illuminated and is an iconic symbol of Boise.  I love the illuminated cross in the midst of the huge fire.  (By the way, it has been determined that the cause of the fire was someone shooting off fireworks up at Table Rock.  A witness says a firework went into the grass and ignited it immediately.   The people responsible ran off.) 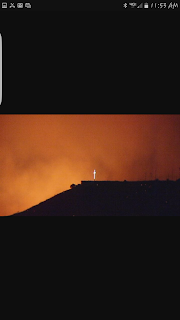 The next picture was taken by me.  I realize it's terrible.  I took this from my garage before I jumped into my car. 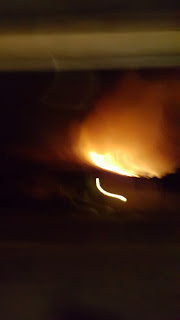 Finally, here is a bit of what things look like today.  There is a lot of scorched earth!  I am thankful to the firemen who did an excellent job of keeping the fire away from homes.  (It literally burned right to the property line of every house on the perimeter of the neighborhood.)  I am also grateful to friends around the world who saw my quick plea on Facebook for prayers and who, I know, prayed.  And of course I am grateful to God.  Even if we lost our house I knew He would care for us. He has blessed us far beyond anything we deserve. 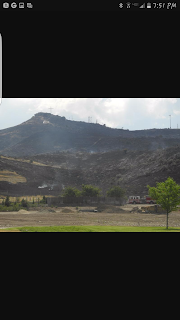 What a terrifying night you must have had. Fire is so unpredictable. So glad you were safe.

I am glad you are all safe, frightening that something like this can happen so very quickly. Betty