What's Happening in my Garden?

Honestly, it seems I am surprised by something new in my garden nearly every day. Spring began with these lovely, large yellow peonies. 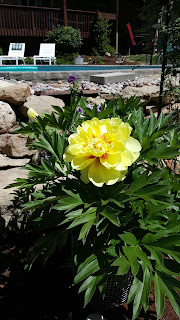 Last year I planted 6 plants under a tree.  The rabbits promptly ate 3, including 2 Japanese Painted Fern.  The remaining 3 limped through last year but
I couldn't remember what they were.  Two are digitalis in a rather plain color.  The 3rd I'm still waiting to discover; it is barely clinging to life but I'm nursing it along in hopes of it flowering for me next year.  (It's in the cage behind the digitalis.   Eric has made all sorts of cages for me to try to keep the rabbits from decimating the entire garden.) 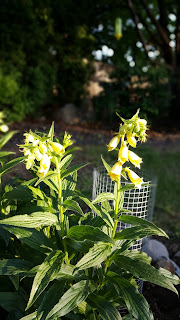 There is a lovely red rose bush.  I "inherited" this bush along with several others from a previous owner.   There are at least 4 roses in an area that is overgrown with ivy and gets virtually no sun.  Hopefully next year we will rework this particular area of the garden.   In the meantime,  I have had many lovely roses from 1 bush. 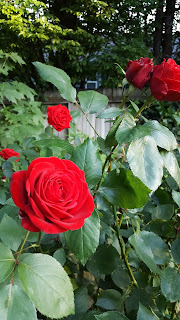 This is a peony I brought with me from the last house.  I can't remember what it's called,  but I like it. 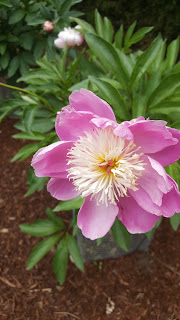 This peony is named Sandra Bernhardt.   I have 2 of this variety.   One bush produced several pretty blossoms.  The other produced several buds but they all withered without ever opening!  I have no idea what causes that. 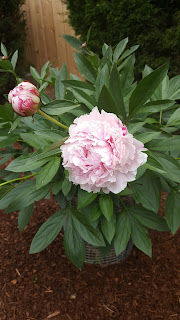 From our last house, I also transplanted an echinnachea or purple coneflower.   The greenery at the left of this picture is, I think,  that transplant.   I'm unsure because it has grown nearly as tall as me with, as yet, no flower.  I wouldn't expect echinnachea to bloom yet but I also wouldn't expect it to be this tall.  I'm waiting to see if it's actually weeds! 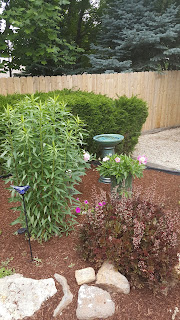 I have several Gerbera Daisies which I haven't killed yet.  I love their vibrant colors!  Mine are pink and orange. 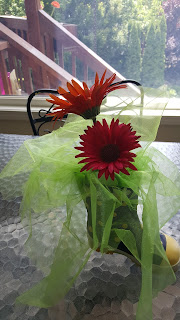 The property came with many day lillies. Most are what I call the ordinary,  boring colors.  This one is better.  I know from last year there will be one plant producing beautiful pink blossoms.   I'll try to remember to photograph them when they bloom. 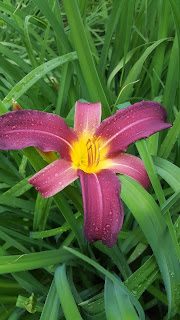 Next, 2 mystery plants.  The first came in a pack of several colors which was simply labeled "dwarf flowers".  I have no idea what they are. 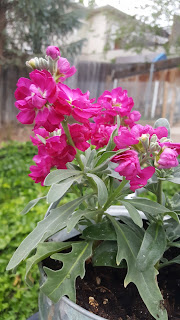 The 2nd was probably labeled, but I tossed the label.  The greenery looks like an asparagus fern, but it produces small flowers shaped like crab claws!  Rather fun, I think. 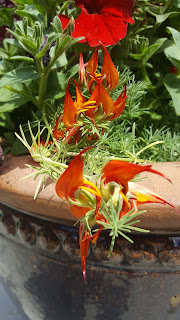 Finally, a red clematis.   I planted 2 clematis last year.  One put forth huge beautiful purple flowers several weeks ago.  The other is just now flowering.  It's leaves and blossoms are tiny.  I'm hoping they get larger as the plant matures.  Anyhow, I did not remember that one of the plants had red flowers.  I saw some red clematis at Joann's Iris Garden and said I must have one.  Who knew that I already did! 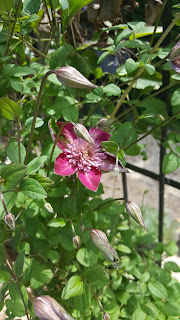 I have other fun, non-gardening things to share.  Just need to make time to write.

I hope everyone'should summer is off to a good start.  Mine is!
Posted by bristowmom at 2:25 PM

What a lovely selection of flowers you have, especially the peonies. I don't know what your mystery plants are, the pink one looks like a stock.

I love all your flowers!

Hello, yes, I'm with Elizabethd - the pink one is probably stock - I have some in my garden, they smell wonderful - like talcum powder. I have your letter - thanks! and am busy replying. Betty