Okay, so today we went house hunting. Co-workers of Eric's have taken weeks or, in the case of at least one, months, to find an apartment they liked. And we were bound and determined that if we didn't find something GOOD we weren't going to stay. We at least had to see today that there was the possibility of something good.

My Mom once told me that Eric and I should not ever look at houses because, for us, it is like looking at puppies. You know: it is nearly impossible to "look at" puppies and not come home with one. We are like that with houses. We buy them way too frequently. But this time, THIS TIME, we made a list like the annoying people on "House Hunters" (my favorite TV show.) We had a column for "needs" and a column for "wants" and we were taking pictures and taking notes. Ok, we were not as studious about it as the accountant types with their lists, but we were trying.

The beginning lined up with my worst fears. We went into a fairly nondescript building with a tiny lobby, up a small elevator. When we entered the living room I almost wanted to turn around and leave. It smelled a little musty. The furniture and the painting hanging on the wall were straight out of the 50's, and I don't mean mid-century modern styling on new furniture. No, I think these pieces graced someones home in the 50's. But I put on a brave face and kept looking. There WAS a balcony off the living room, one thing on our NEED list. Things began looking up in the dining room. I actually liked the furniture and there were built in cabinets. The kitchen was fairly nice. There was a dishwasher (as opposed to the standard dish DRYER) and a full size washing machine and dryer! I have never written about the inconvenient oddities around here - need to do that sometime. Anyway, things continued getting better. The master bedroom was the hugest thing I've ever seen and it had doors opening to the balcony. It was large enough to be our bedroom AND my craft room. There were a total of 4 bedrooms and 2 of the smaller rooms also had balconies! Taking another look at the living room I decided it could be made comfortable. Eric suggested we could move the ugly furniture into a 4th bedroom, which we would use as a TV room. Okay, this could work. The building was old but the size of the apartment was wonderful.

We went on to see 4 more apartments. They were all newer than the first, had more "curb appeal" and grander lobbies. They were also all smaller. One was brand spanking new and backed up to a mountainside. It was beautiful and so peaceful. Some had very nice architectural features, some had good public spaces where the kids would be free to play.

We had expressed our desire that, if at all possible, we would prefer a single-family home. So Susan dropped us off for lunch while she went to see about "a house" for us to view. Over lunch we discussed the pros and cons of the various apartments. We eliminated some, and we chose our top 3 favorites. But we were hopeful that perhaps the house wouldn't be too dumpy.

When Susan picked us up from lunch she said that she had 4 houses for us to look at. The woman works fast! (And today is a holiday in Taiwan, so we were surprised she was working at all.)

Once again, the first house was everything we feared. It DID have a swimming pool, but everything was pretty much awful after that. The house was a wreck. Even still, the idea of a HOUSE in Taiwan and a POOL that we could use whenever we wanted was enticing. To me, at least. Eric, not so much.

For the next house Susan drove us "up the mountain". OH. MY. GOODNESS!!! Up and up we went. Around curves. And more curves. At one point instead of watching the road I looked at the view and I could see the entire city of Taipei. It was amazing. Surely, I thought, if the house "down there" was a dump, then anything "up here" was going to be worse. We drove past some houses which Susan pointed out were former US Military housing. I remembered reading about that area. Yep, this was not going to be pretty.

We drove into the lane of the next house. Actually the next 2 houses were on this one lane. As we approached the first my hopes began to rise. This is the front yard: 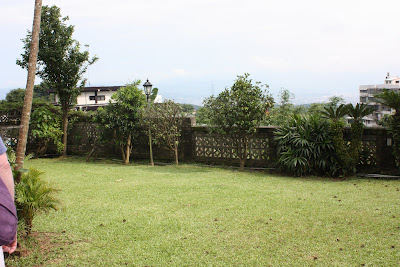 If you click on the picture and then look hard at roughly the center of the picture, you can just barely see Taipei 101 in the distance. This front yard looks out over all of Taipei. Maybe. Just maybe...

We went a little further into the yard and found this: 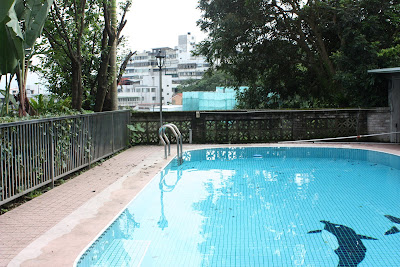 This lovely swimming pool which belongs only to this house. I am definitely interested.

Another view of the front yard. (Or "garden", as it's called here.) 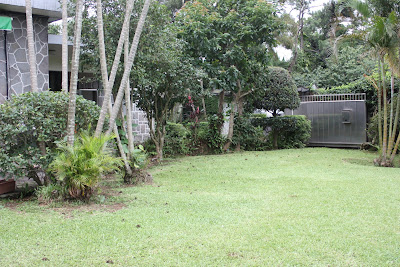 We were both charmed as we walked in the front door and saw this: 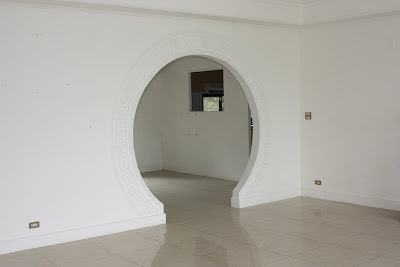 What can I say? We are both suckers for different architectural details.
The living room is so large that I could not get it all in one photograph. The picture above is part of it, looking into the dining room. This next picture is another part, though not all. The fire place is a real, wood-burning fireplace! 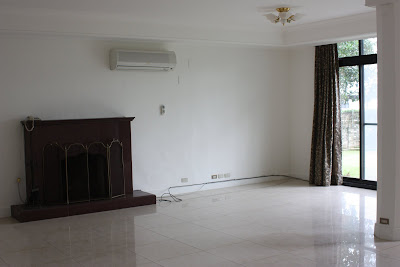 Here is a view of the kitchen. It is not grand, but it is quite nice. And the windows look into the back garden. Lovely. 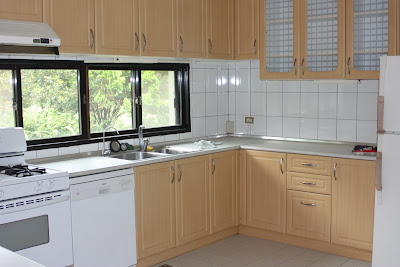 And that's it! Eric and I were both head over heels in love with the place! There are 4 bedrooms and 3 bathrooms, plus a maids quarters. It's somewhat old. The bathrooms are no where near as nice as those in the apartments, but... THE VIEW! THE POOL! AND... the kids can go right outside our gate and be picked up by the school bus - whichever school we choose. AND...there is a more direct route down the mountain so that Eric's drive to work will actually be SHORTER than it is currently!
Did I ever say I didn't want to live in Taiwan? Forget it. Forget I ever said that!
We breezed through the remaining 3 houses but none of them captured our hearts the way this one had. It was kind of like looking at a puppy. We forgot to take notes. Except, when we got home and pulled out our list of needs and wants we realized that this home met every single thing on our list. And then some.
It's not ours yet. The realtor will be negotiating. But we are so excited about the possibility!
Posted by bristowmom at 9:07 PM

I can't believe it! I was away for an extended weekend and didn't see your blog. When I check today I see that in one week's time you have gone from I'll be home tomorrow to we're getting a house and living in Taiwan for 2 years -- you really are a gypsy Mom!

The house seems amazing. I am happy for you and your family, but will miss you back in VA.

I do hope you are successful, it sounds perfect.

Excellent! If God has to win your heart through house, He will. : )

I expected to read about packing up and flying back to the states to find you are possibly staying 2 years! WOW that was a 360. What an awesome experience for your family. I will be anxious to read about how things work out for you Laura. The house looks perfect if you can concince yourself you can live there and be happy. As my 95 year old grandma always says "if it is meant to be it will be"....best of luck to you! Nise