I've heard from family that my Mom is stable and apparently out of danger, so I am calm enough to write.

Before my first impressions of Taiwan I will write a bit about my trip.

I was, of course, not ready to leave. I had kicked into high gear on Saturday but, alas, it was too late. Everything that HAD to be done was done -- well, almost everything. I remembered the passports and the paperwork and everything deemed necessary. I did forget to turn on the security system though! I was washing dishes when the cab driver arrived so I panicked and in my rush to leave forgot the security. Thankfully I had given a key to the neighbors so I called and asked them to go in and turn it on. I am thankful for good neighbors!

The only glitch in our trip was at LAX security. It took forever. They moved us to a special line for families with children and I thought "Isn't that nice!" Then we stood there for a long time with no one moving an inch. I don't think there was any staff for our line at first. When we finally got within view of the security apparatus I learned that a TSA screener was going back and forth between our line and another. Just as we were getting close a lone man walked past all of us straight to the front of our line, put his bag on the screening belt and walked toward the scanner. (The family in front of us had finally managed to get all of their bags through screening - it took 2 tries. The only thing left was to get their stroller through, then they would be good to go. Most of the family had passed through the scanners but TSA said 1 family member had to stay on our side until everything was through, so one man remained holding a boy who was about 2 or 3. The rogue line jumper was instructed to remove his bulky sweatshirt. He said he could not do that. I think TSA was trying to get the father and son through, but the rogue said "I'm going to alarm anyway" and walked through the scanner. It alarmed, the TSA agent asked him why he alarmed then sent him a few steps ahead to a holding area. The agent then stood with his back blocking the scanner, watching the rogue. No one could go anywhere until they got this guy checked out. I don't know how long we were stuck there but it felt like a long time. While waiting, the little boy ahead of us started peeing - first apparently on his father and then, as the man held him out, all over the floor. I couldn't be mad, the poor little guy had nowhere else to go. The floor was carpeted so there was no puddle, it just soaked right in. I told the kids to be sure to walk wide around that area when it came time to go through the scanner. (We were shoeless for security!) At long last someone came to deal with the rogue and we proceeded through rather quickly.

From then on the trip was uneventful.

We arrived in Taipei (Taoyuan technically) at 5:00 a.m. We breezed straight through customs and into a taxi. I took some pictures from the cab. Most of what we saw was modern or western style, but Anna and I were on the lookout for Asian architecture. We saw this: 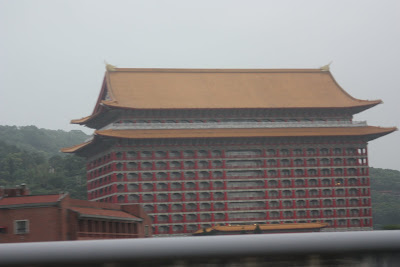 Our first glimpse of Taipei 101, in the distance: 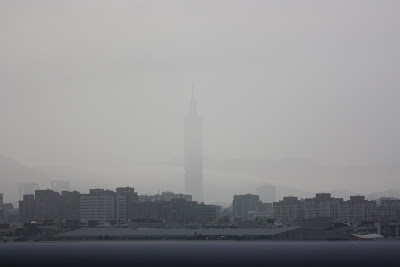 It had rained overnight and was a bit foggy when we landed, thus the hazy looking photo.

Transportation is a mixed bag of everything. Well, I haven't seen anyone riding on animals yet so not quite everything. But along with the familiar car brands there are lots of tour buses - usually double decker and always with curtains. Most that I've seen have frilly lace curtains and the outsides are often painted pink or purple or both. My kind of place! The primary mode of transportation is scooter and I will eventually show pictures of that, but here is another which is mixed in with buses, trucks, cars and scooters: 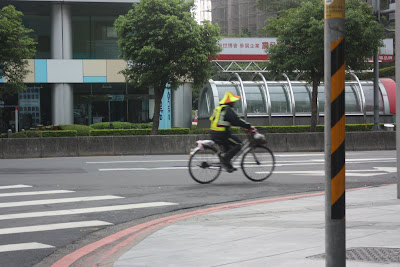 I've seen lots of people on bikes, but I am thrilled that I got this picture because the man was wearing that old Asian style hat. The street was empty other than him, but it was not yet 6:00 a.m.

I told Eric he had better be waiting in the lobby for us or he would be in TROUBLE. Well, he wasn't in the lobby. Our flight arrived early and he never expected us to get through customs so quickly, so we caught him very much off guard. The apartment complex we're in has 2 towers and I wasn't even sure which tower we were in. I didn't know the apartment number, nothing. And I hadn't changed any currency to NT$ so had no way to pay the cab driver! Thankfully, this apartment is very upscale with 24 hour security at the door and 24 hour concierge service. The concierge paid the cab driver for me and called Eric to let him know his guests were here.

Here is a quick perimeter tour. The view from the kids bedroom: 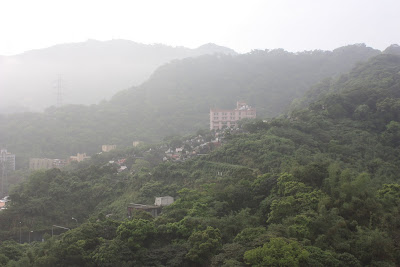 The view in one direction from our bedroom: 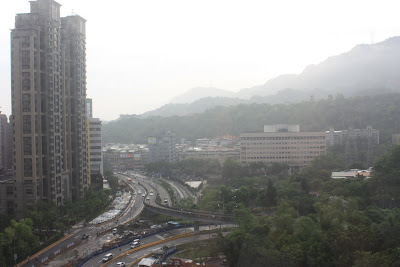 And the view in the other direction from our bedroom: 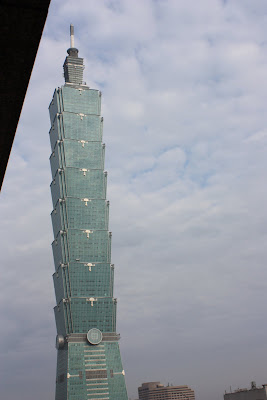 We are literally one block from Taipei 101.

Anna and I went on a little exploration around the neighborhood in the afternoon. There is a surprising mix of new, upscale apartments and older housing just within a short distance of our apartment. I have pictures of the swanky, but honestly am much more enthralled with the old. That is the way the real people live and it is fascinating to me. If I am unable to sleep (which is very likely) I will put those photos together and get them posted tonight also.

In closing, please pray for my Mom and Dad - Mom to remain stable and be comfortable and Dad that people will come alongside to help him. Mom has always done EVERYTHING on the home front so I cannot imagine how he will function without her there. Thanks.
Posted by bristowmom at 7:40 PM

Laura,
So happy to receive your posts and know you all are there safely. Thank you for the beautiful description and pictures. I can almost imagine it. So sorry to hear about your Mom. Definitely will be praying for her and your Dad. Looking forward to the next update. We'll be praying for you, especially on Weds. am!
Love,
Katherine